From Othering to Belonging

How can we, as a society, move from “othering” to belonging. What and whom does othering actually benefit? How can we expand the circle of human concern and concern for nature? How can we live into our innate interconnection to create true inclusivity and wholeness? How do we build the structures, institutions, policies, cultures and stories that will support that inclusivity? Angela Glover Blackwell, Founder-in Residence at PolicyLink, which works to improve access and opportunity for all low-income people and communities of color, and john a. powell, renowned law professor, activist, and founder of the Othering and Belonging Institute at UC Berkeley, delve deep into these critically important, existential questions.

This discussion took place at the 2022 Bioneers Conference. 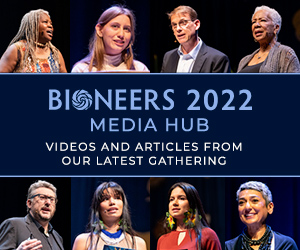 Angela Glover Blackwell, one of the nation’s most prominent, award-winning social justice advocates, is “Founder-in-Residence” at PolicyLink, the organization she started in 1999 to advance racial and economic equity that has long been a leading force in improving access and opportunity in such areas as health, housing, transportation, and infrastructure. The host of the Radical Imagination podcast and a professor at the Goldman School of Public Policy at UC Berkeley, Angela, before PolicyLInk, served as Senior Vice President at The Rockefeller Foundation and founded the Urban Strategies Council. She serves on numerous boards and advisory councils, including the inaugural Community Advisory Council of the Federal Reserve and California’s Task Force on Business and Jobs Recovery.

john a. powell, Director of the Othering and Belonging Institute and Professor of Law, African American, and Ethnic Studies at UC Berkeley; previously Executive Director at the Kirwan Institute for the Study of Race and Ethnicity at Ohio State, and prior to that, founder/Director of the Institute for Race and Poverty at the University of Minnesota, has also taught at numerous law schools, including Harvard and Columbia. A former National Legal Director of the ACLU, he co-founded the Poverty & Race Research Action Council and serves on the boards of several national and international organizations. His latest book is: Racing to Justice: Transforming our Concepts of Self and Other to Build an Inclusive Society.

To learn more about john a. powell, read his full bio at the Othering and Belonging Institute.