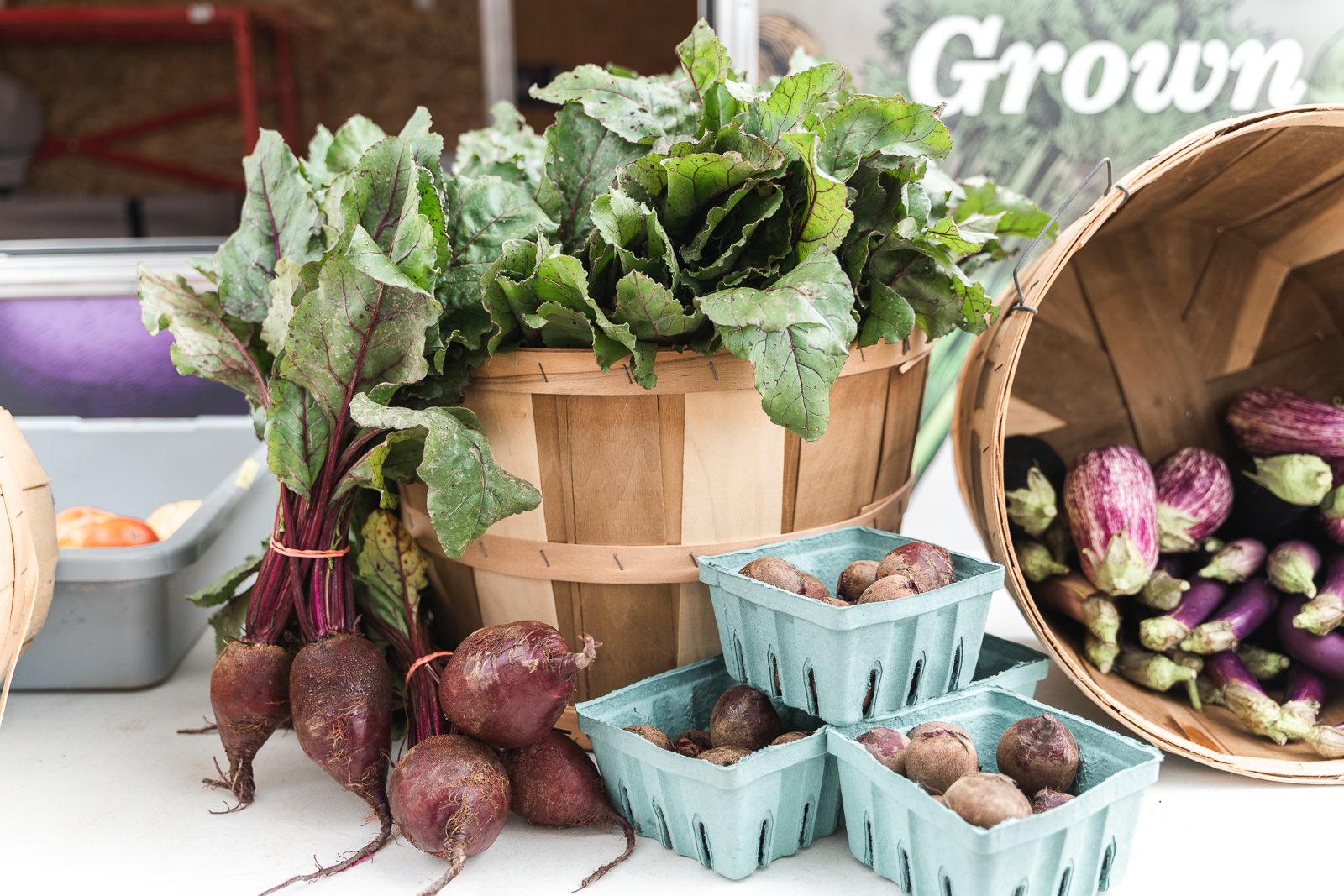 The nutrients in fruits and vegetables have declined in the past 50-70 years. People may be getting enough calories but could still experience hidden hunger – a lack of essential nutrients. Arty Mangan of Bioneers interviewed Dr. Gladis Zinati of The Rodale Institute to discusses how soil health and farming practices affect human health.

Dr. Zinati, a soil scientist and director of the Vegetable Systems Trial , evaluates the impact of cropping systems and management practices on nutrient cycling, carbon sequestration, vegetable nutrient density and plant resistance to pests. She has 30 years’ experience and holds undergraduate degrees in General Agriculture and Agriculture Engineering; a M.S. in Horticulture from the American University of Beirut; and a Ph.D. in Soil Fertility from Michigan State University.

ARTY MANGAN: According to the “2014 Global Hunger Index” (compiled by the NGO Concern Worldwide) 2 billion people world-wide suffered that year from hidden hunger. What is hidden hunger?

GLADIS ZINATI: First, let’s define hunger. Hunger is usually understood as the lack of food, but according to the United Nations Food and Agriculture Organization, hunger is defined as undernourishment, i.e. when a person is getting less than 1800 kilo-calories per day. But hidden hunger has to do with more than just the number of calories consumed. Deficiencies in micronutrients and vitamins are also forms of hidden hunger.

Why is that important? Because a deficiency in minerals and vitamins in the food we eat will ultimately weaken our immune system. In this era of the COVID-19 pandemic, if your immune system is already compromised or impaired, then your susceptibility to a disease caused by a virus such as SARS-CoV-2 (or many other diseases) is much higher. Deficiencies in minerals and vitamins not only impact our susceptibility to viruses, but also, in the long term, they can result in serious, long-term physical and mental disabilities, so to authentically address hidden hunger, we need to look at how we can improve not just the quantity of food but the nutrient density of foods.

ARTY: USDA trend data from 1950-1999 demonstrate a decline in the protein, calcium, phosphorus, iron, vitamin A, riboflavin and vitamin C content of somewhere between 5% and 35% in a number of vegetables and some fruits. Similar declines were seen in corn and soybeans. A 2004 study by Donald Davis at the University of Texas attributed the decline in food crop nutritional density to seed breeders breeding for size, growth-rate and pest resistance while ignoring nutrition. Others say that the excessive application of synthetic nitrogen increases plants’ production of sugars at the expense of other nutrients. Irakli Loladze of Arizona State University has claimed that as CO2 levels are rising with climate change, plants are making more sugars and diluting other nutrients. What do you think of those studies, and what do you think are the main causes of nutrient declines in food?

GLADIS: There are many factors that play a role in the decline of nutrients in food. As you mentioned, seed breeders have been breeding for bigger sized fruits and vegetables. When breeders breed for plant growth, the plant takes up more water and nutrients from the soil and becomes bigger, and when you apply more synthetic nitrogen, which is readily available to the plant, the plant taps into it and grows vigorously. Plants photosynthesize more and produce more sugars, and those sugars, in the form of carbohydrates or other starches, increase at the expense of minerals. This is called a dilution effect. When you apply increased water and nitrogen; fats, proteins and carotenoids increase, but the ratio of minerals decreases.

Organic systems depend on biology. Naturally occurring nitrogen is not like the synthetic nitrogen fertilizers used in conventional farming systems; it is more mediated by biology. It needs to be digested first and then expelled by microorganisms before plants can take it up. There is a slow release of the nutrients, so the plant will not grow too vigorously or abruptly; it will grow over time, and not at the expense of the minerals. And if you have increases in CO2 in the atmosphere, which, of course, we have been seeing in the last decades, that also increases the amount of sugar that the plant is making, at the expense of nitrate, magnesium, iron or zinc.

ARTY: How does the health of soils affect nutrients in food crops?

GLADIS: Soil health is absolutely critical: it determines the availability of nutrients and plants’ capability to extract those nutrients from the soil. If the soil is not healthy and has poor drainage due, for example, to a plow layer that has compacted the soil creating a surface of only 0 to 20 centimeters, then the root development of the plant cannot penetrate vertically, and they will grow horizontally instead. As a result of the stress of compaction, a plant’s roots will be denser, but they will be deprived of any nutrients below that compacted layer compared to a similar plant grown in another environment that is not compacted and where the roots are able to get nutrients at the deeper levels of their growth.

Another example of how soil health affects the nutrients in crops has to do with organic matter. As soil health decreases, the organic matter pool also decreases, negatively affecting the microbes in the soil (which are of course essential to plant growth). Disruption of those biological processes by excessive tillage, herbicides, fungicides and synthetic fertilizers reduces the amounts of nutritional elements taken up by the plants. And if your soil is not covered with cover crops, there will be a greater possibility of erosion, and the soil-dwelling microbes will be deprived of access to roots to work with, also lowering soil nutrients. Increasing the density of plants-per-acre with cover crops not only reduces erosion but also optimizes soil health.

ARTY: Can you describe the work you’re doing with the Rodale Vegetable System Trial?

GLADIS: The Vegetable Systems Trial is a long-term comparison side-by-side of organic and conventional cropping systems on the same soil type and under the same climate conditions.

Every year I grow five crops: a tuber such as potato; sweet corn, which is botanically classified as a fruit; green beans or winter squash; and a leaf crop such as lettuce. The project has two major goals. One is to provide, over time, rigorous data for growers to have viable economic options for long-term sustainability when growing vegetable crops. The second and main focus is to compare and understand the impacts of conventional vs organic cropping systems and management practices. How do they affect plant health in regards to pests and nutrient uptake? How do those systems compare in how they affect the soil environment in regards to nutrients and microbes? How does the application of herbicides such as glyphosate impact plant health and soil health?

Ultimately, the goal is to find how all this links to human health. We want to provide that information to the public, to medical doctors, governments, and policymakers. In the future, we would like to see more Vegetable System Trials across the nation in different regions to look at how, under different conditions, such as different climates and soil types, the data will vary.

ARTY: What have you found so far about nutrient density when you compare organic to conventional crops?

GLADIS: We have a long-term plan for the Vegetable Systems Trial. We just harvested a fourth growing season, so it is pretty early to draw any definitive conclusions, especially when looking into nutrient density. When I look at certain minerals and vitamins, I sometimes see that organic is higher than the conventional, and sometimes I find that there is no difference, but it is still early. We really need a minimum of five to ten years of data to pinpoint the trends and to confidently track how nutrient density is changing with time.

ARTY: There are conflicting studies about the nutrient density in organic food. In 2008, Dr. Charles Benbrook (who at the time was Chief Scientist of The Organic Center) and scientists from Newcastle University published in the British Journal of Nutrition a meta-analysis that found higher levels of antioxidants and polyphenols in organically produced food, but a 2012 Stanford University study claimed that there was “no strong evidence that organic foods are significantly more nutritious than conventional foods,” even though “organic produce had higher levels of health-protecting antioxidants.” Why do you think people are coming to different conclusions?

I agree with Charles Benbrook and his colleagues who say that with organic food you may expect more antioxidants and polyphenols. In the organic systems, especially if you are using a less harsh pesticide than a conventional pesticide, you are allowing more of the pests to survive. In nature, plants often react to pests by producing antioxidants in the same way human beings’ immune systems, when we are exposed to foreign bacteria or viruses, secrete enzymes and other compounds to trigger our immunity. A plant will produce more antioxidant and polyphenol compounds. Pests are really helping the plant produce those compounds. In the conventional chemical system, you spray the plants every time you see insects and pests, so you kill the natural predators and you eliminate the plant’s need to produce an immune response. It’s also true that plants under certain natural stresses, such as occasional drought or extreme temperatures also may have more antioxidants and polyphenols compared to plants that are irrigated.

GLADIS: It really depends on the conditions of the crop and the conditions of your soil. You want the fungi and bacteria ratio to be balanced. Some people think more fungal dominant soils will provide more of certain nutrients and compounds that are mediated by the fungi, and that they will protect the plant against some pathogens. In general, if your crop is short term, you really need bacterial dominance, but if it is long-term, such as perennial crops and orchards, it will make more sense to aim for fungal dominant soil because those plants often need continuous access to these compounds from the fungi.

ARTY: Do you ever inoculate your soils with mycorrhizal fungi?

ARTY: So far, has your research with the Vegetable Systems Trial given you any surprises?

GLADIS: In the Vegetable Systems Trial we started with an organic soil that had been certified for 20 years. Now that the soil has been used in our trials to compare the organic and conventional systems, we found a decline in the percent of organic matter in the conventionally-farmed fields that is happening faster than we expected in only 3-4 growing seasons. I am eager to see how those things will shape up in five years and ten years, so that we will be able to provide rigorous information to growers to show them that even if you start with good soil, i.e. you have a good level of organic matter to start, but you don’t manage it well, you can reduce your soil organic matter pretty quickly.