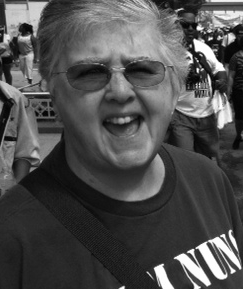 Sister Gloria Rivera, IHM was born in Mexico City. Women religious served people, but they were segregated from society. While attending college in the United States, she became drawn to a life of serving others and the Church. Her goal was to return to her homeland and teach and serve children and the poor.

She began her religious life with the Sisters of Mercy from Iowa. In 1992 she met three Sisters of the Immaculate Heart of Mary at a conference in Mexico, and two years later, she moved to Detroit to become further acquainted with the IHM community.

A longtime leader on justice and environment within the IHM community, Gloria has worked on an impressive array of projects over the course of her time in Detroit. She ministered at Groundwork for a Just World, providing education and action on women’s issues, peace, environment and education. This was followed by a position at Proyecto Ayuda – Project Help, which provided older adults with minimum-wage jobs in nonprofit organizations. From there, she became the executive director of Freedom House, which provides comprehensive services for asylum-seekers, and then ministered at the Michigan Coalition for Human Rights planning educational events and providing opportunities to highlight human rights issues.

Since 2005, Sister Gloria has been a leader with Great Lakes Bioneers Detroit (GLBD), a network site for the national conference. Since 2009 Gloria has worked year-round with GLBD. Currently she is focusing on Biomimicry’s possibilities for social innovation.