Black Lives Matter Co-Founder: Protests Are the Result of “Police Terror with No Accountability” 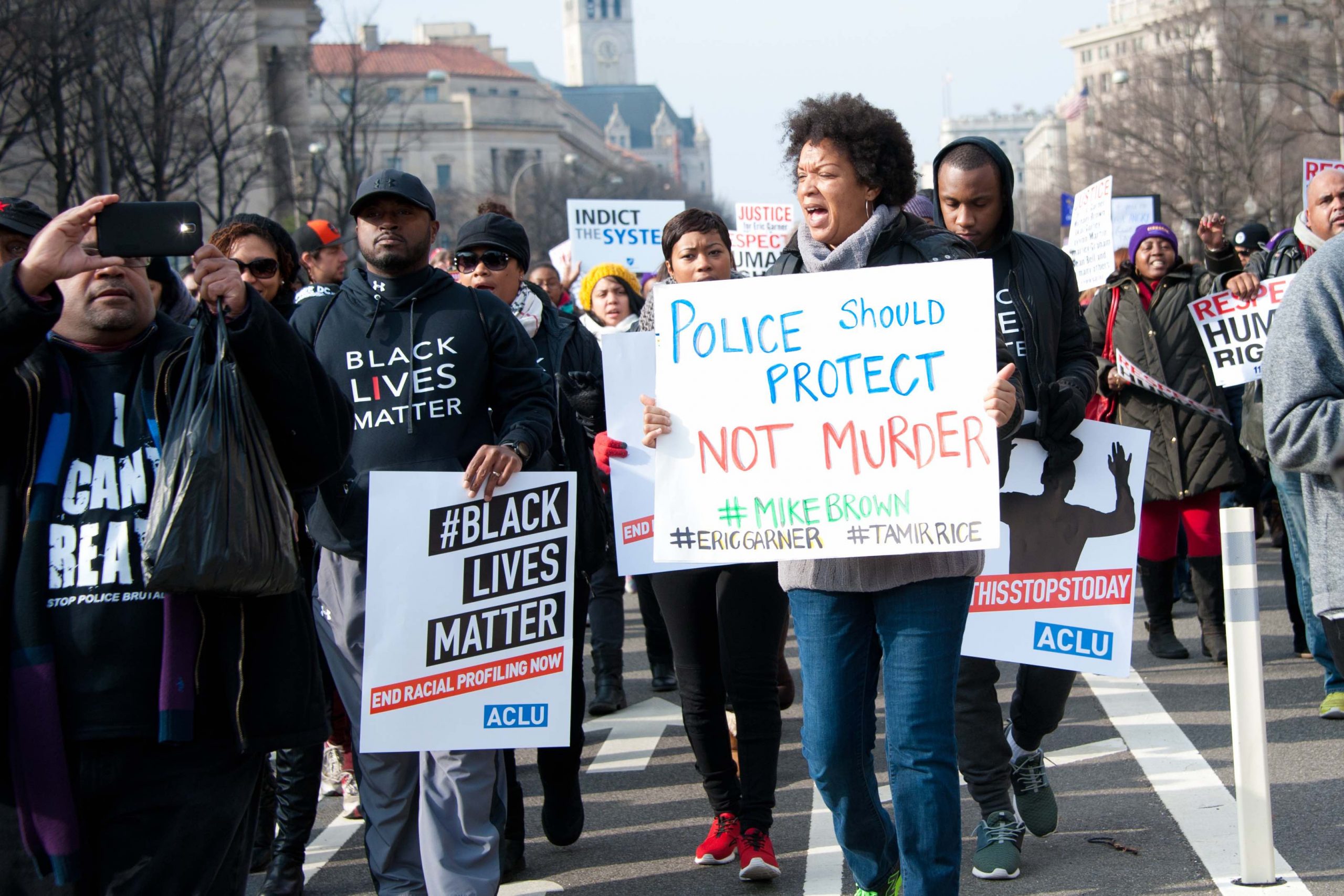 This article was originally posted by Democracy Now! Democracy Now! is an independent news program that features a diversity of voices speaking for themselves, providing a unique and sometimes provocative perspective on global events.

As thousands in Los Angeles continue to protest against police brutality and face mass arrests, Mayor Eric Garcetti is facing criticism for increasing the budget for the Los Angeles Police Department. Organizers have called on the City Council to enact a People’s Budget that slashes money for police and invests in services for the community instead. “We have created a system that overrelies on law enforcement and prioritizes their money, their budget, their needs over everything else,” says Patrisse Cullors, co-founder of Black Lives Matter, and Reform L.A. Jails. “Now is the time that we redirect resources back into our communities.”

This is a rush transcript. Copy may not be in its final form.

AMY GOODMAN: This is Democracy Now!, democracynow.org, The Quarantine Report. I’m Amy Goodman, with Juan González, as we go now to Los Angeles, where protesters took to the streets of downtown and Hollywood on Monday, another day of mass protests against police brutality and the murder of George Floyd. Demonstrators briefly shut down the 405 Freeway in West L.A. In Van Nuys, looting broke out near a peaceful protest organized by students.

Monday marked the third night of a countywide curfew in Los Angeles, where protests have been widespread and resulted in thousands of arrests. The wealthy enclaves of Beverly Hills and Santa Monica set 1 p.m. curfews after protests reached their neighborhoods. On Sunday, hundreds were arrested in a mass protest in Santa Monica that left many storefronts destroyed.

Calls are growing for the firing of the LAPD chief, Michel Moore, who said Monday that looters were as responsible for George Floyd’s death as the police officers who killed him.

POLICE CHIEF MICHEL MOORE: We didn’t have protests last night; we had criminal acts. We didn’t have people mourning the death of this man, George Floyd; we had people capitalizing. His death is on their hands as much as it is those officers.

AMY GOODMAN: The Los Angeles Police Chief Michel Moore has since apologized for his statements. Mayor Eric Garcetti tweeted, “The responsibility for George Floyd’s death rests solely with the police officers involved. Chief Moore regrets the words he chose this evening and has clarified them.”

This comes as Mayor Garcetti is facing criticism for increasing funding for the Los Angeles Police Department in a budget for the coming fiscal year. Community members are demanding the City Council act to enact a People’s Budget that slashes money for police and invests in services for the community instead.

Well, for more, we’re going to Los Angeles, where we’re joined by Patrisse Cullors, political strategist, co-founder of Black Lives Matter, founder of Reform L.A. Jails. She’s the co-author of When They Call You a Terrorist: A Black Lives Matter Memoir.

Welcome back to Democracy Now!, Patrisse. It’s great to have you with us. Can you respond first to the death of George Floyd and then to the massive anti-police brutality protests and the police response?

PATRISSE CULLORS: Sure. It’s really good to be here, Amy, and thank you so much for having me on.

I think, you know, I just start with my deep condolences to George Floyd’s family and the community of Minneapolis. Once again, we see the devastation and the impact of the killing and torture of Black communities. And so, I just want to start there.

I think these protests are massive in a way that we haven’t seen them in years, for a number of reasons. Number one, we’ve had to live under four years of a Trump regime that has completely devastated communities financially, spiritually, emotionally. And number two, we have still dealt with years of police brutality, police violence and police terror, with no accountability whatsoever. And this generation is tired. Enough is enough.

JUAN GONZÁLEZ: And, Patrisse Cullors, you recently went back and watched some footage of the 1992 Rodney King uprising. What struck you the most about those events?

PATRISSE CULLORS: Well, I think it’s — you know, there’s two things happening in our city right now, in Los Angeles. One is massive protest in solidarity with Minneapolis, but also talking about what’s happening in our own town. There’s been 601 deaths since 2012, involved specifically with police officers killing civilians. And we have had a DA here, Jackie Lacey, who has not prosecuted a single officer and has been largely unaccountable to the community. And as Amy said earlier, 54% of L.A. city’s budget is actually LAPD’s budget. And the community is over false promises. We’re over having to deal with elected officials who, instead of listening to Black pain and grief, send out the National Guard, you know, create more havoc in our communities.

AMY GOODMAN: Patrisse Cullors, can you talk about the budget that has just been unveiled, and what you’re demanding, where you think money needs to be spent at this point, and also where you see these protests going?

PATRISSE CULLORS: Sure. Our local chapter, Black Lives Matter Los Angeles, led by Melina Abdullah, really has been the group that has been focusing on the city budget specifically. For years, we have seen the unveiling of a city budget, and it has always prioritized LAPD’s money first, and it’s deprioritized everything else, all the social services that our communities need.

JUAN GONZÁLEZ: And, Patrisse Cullors, I’m wondering — the response of the police in many of these cities now, we’re seeing increasing aggressive moves by police, whether it’s in New York or in Louisville or in other cities, against peaceful demonstrators. To what extent do you feel that the police across the country, many of them, have been emboldened by the language and the demeanor of President Trump over these last four years, that they feel that they have basically the backing of the White House, if they have to —

PATRISSE CULLORS: Absolutely. I mean, we know Trump’s history. We know how he has impacted just by way of how he communicates, just how he uses the media to stoke fear in mostly white, affluent communities. He’s aligned himself historically with the police, being law and order. He just went on the news yesterday telling people that he’s going to send the military into cities. This is a man who would encourage people being beat up, counterprotesters that would come into his rallies when he was running for president. This is the man who told law enforcement at a huge law enforcement conference that they should be beating up people. And we know that he is in complete agreement with law enforcement terrorizing and using aggressive tactics like rubber bullets, like tear gas.

On Saturday, at our protest that we launched, Black Lives Matter Los Angeles, along with Build Power, for two hours, it was full of passion, full of love, and we marched together. The minute that march got violent is when the police showed up. They started shooting into the crowd rubber bullets. They started batoning people. It was disturbing, and it was scary. And it was so obvious that they feel emboldened right now.

AMY GOODMAN: How do you respond, Patrisse, to police officers showing solidarity with the protesters? On Monday, you have one of New York City’s top officers, Terence Monahan, taking a knee, hugging a protester during a rally in Washington Square Park. In Flint, Michigan, the Genesee County Sheriff Chris Swanson marched with protesters on Saturday. In Green Bay, Wisconsin, Police Chief Andrew Smith condemned the killing of George Floyd and walked with protesters. And we’re seeing this amidst the tear-gassing, amidst the shooting, amidst the pepper-spraying and the massive number of thousands of arrests. Your comments?

PATRISSE CULLORS: It’s like a really frightening abusive relationship. It’s when you’re in an abusive relationship, and the partner is gaslighting you and telling you that “Everything that you’re feeling is not true, and look what I’m doing for you.” It’s not acceptable behavior, honestly. You’re either going to be in solidarity with the community and stop brutalizing us, or you’re going to continue to do what you’ve been doing and business as usual. But there’s no half-stepping.

Taking a knee, marching with protesters, that doesn’t actually change the structure, doesn’t change our system that we live in, which is a system that continues to violate the rights of Black people, continues to kill Black people, hunt Black people and traumatize Black people. That’s what law enforcement has done for years. And these new acts of solidarity are — they don’t sit well with many of us.

AMY GOODMAN: Let me ask you — we talked to you about the film Bedlam, which very much focused on you, Patrisse, and your brother Monte. So, all of these mass protests are taking place amidst the pandemic. They could be super-spreading events, the horror of what could happen, and particularly impacting Black and Latino and Native American communities. And I’m wondering, actually, what has happened with your brother Monte, who lives with schizoaffective disorder since he was a teenager, in the midst of all this — the pandemic, the police brutality protests.

PATRISSE CULLORS: Well, we were lucky enough to get Monte off the streets last fall. And he was hospitalized for quite a bit of time, as I received conservatorship of him. And he ended up going to a mental health facility, so that’s where he’s at now. The facility has not experienced a COVID-19 outbreak, although there has been some COVID-19 patients. He is doing well right now, and he is safe. And that feels really important to me, especially given what’s happening right now.

JUAN GONZÁLEZ: And, Patrisse, I wanted to ask you — I don’t know if you can answer this from your perspective, but I’ve been noticing in the reports that have been coming out about the protests and also about some of the looting and the vandalism that’s broken out, that it’s not just occurring in the major cities, but, for instance, in the Chicago suburbs. Faraway suburbs from the major city, like Aurora, Cicero and others, have also seen strange incidents of looting that have gone on. Do you have some concern that there may be some attempts to actually — deliberate attempts to provoke violence, to stir up greater animosity among some sectors of the American community?

PATRISSE CULLORS: Absolutely. We know that there are three sets of folks who are out in the streets. There are protesters, those of us who are fighting against police brutality and police terror. There are white supremacists, those who are exploiting Black pain in this moment and really trying to undermine our protests. And then there’s police, who sometimes act as protesters, so undercovers, and also uniformed officers, who have created significant amount of distress and havoc and confusion in protests. We have to be careful when we’re protesting, both with COVID-19 but also because there are times where there’s agent provocateurs and there’s different people who have a different agenda than what our movement actually has.

This article was originally posted by Democracy Now!