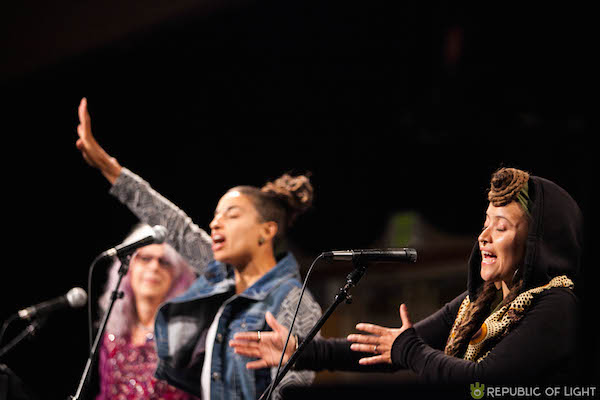 “Climate change is real, it is happening right now. It is the most urgent threat facing our entire species, and we need to work collectively together and stop procrastinating. We need to support leaders around the world who do not speak for the big polluters, but who speak for all of humanity, for the indigenous people of the world, for the billions and billions of underprivileged people out there who would be most affected by this. For our children’s children, and for those people out there whose voices have been drowned out by the politics of greed.”

This is a transformative moment in the history of Bioneers, and you — our community — are leading the revolution. In this moment of epic change, the time is now to amplify and extend our influence, to take our movement of movements and convert that energy into structural, systemic change.

For the 2016 conference, we’ve created four “meta-programs” that use the powerful conference platform and our related media to throw the high beams on priority areas and goals – and move the needle for real systemic change. As the sun in our Bioneers solar system, the conference both educates people and connects diverse issues and communities in catalytic ways that generate very wide ripples.

Read on for more about each of the four meta-programs and featured highlights.

One of the thrilling plans for the 2016 conference will be a focus on biomimicry and biodiversity conservation. Along with a keynote by Janine Benyus, the globally renowned biologist, author and co-founder of Biomimicry Institute and Biomimicry 3.8 consultancy, we’re deeply honored to host a very special event in partnership with the Biomimicry Institute and Ray C. Anderson Foundation: the inaugural “Ray of Hope” Biomimicry Global Design Challenge. The $100,000 prize will be given live on the main stage, and it’s for biomimicry food systems! The eight finalist competing teams will be present.

Biomimicry is about far more than clever inventions. It causes a fundamental shift in our worldview to see nature not as a physical “resource,” but as a teacher, model, metric and partnership in which we’re the junior partner. Our goal is to see biomimicry become the default position for design, industry, economy and culture by 2020.

We’ll also be doing leading-edge programs on conserving biodiversity in this mortifying Sixth Age of Extinctions. One crucial paradigm shift includes creating legal rights for nature, and Tom Linzey and Mari Margil will share their powerful work supporting local communities to do just that, while also revoking corporate rights. The globally acclaimed ethnobotanist, author and neotropical rainforest conservation advocate Mark Plotkin will illuminate the work of the  Amazon Conservation Team (ACT), which he co-founded in 1995 to protect the Amazonian rainforest in partnership with local Indigenous peoples. ACT has worked with 32 tribes throughout Amazonia, and helped conserve millions of acres of the “lungs of the planet” and its biocultural diversity.

As climate disruption escalates, climate leadership is paramount. We need to move to 100 percent renewables and put environmental justice at the center. We need to begin to draw carbon out of the atmosphere back down to 350ppm. We need to challenge and remake the corporate systems that are driving and sustaining the fossil fuel industry and overpowering democracy at every turn.

Our 2016 climate leadership meta-program will feature four diverse keynotes. Bill McKibben, perhaps the greatest activist on the planet today, will shed light on where the climate movement needs to go post-Paris. Solar entrepreneur extraordinaire Danny Kennedy, a founder of Sungevity, will interpret the economics of renewables and how to use business, policy and social movements to power the transformation. Vien Truong, executive director of Green For All, will share the groundbreaking California model that puts environmental justice at the center of policy to bring climate justice and a green economy to underserved communities and communities of color. The electrifying youth climate activist and eco hip-hop artist Xiuhtezcatl Martinez of Earth Guardians will bring to life the mushrooming youth climate movements sweeping the world today.

Another meta-program will highlight the leadership of women, gender equity and gender reconciliation as fundamental to all movements. We’ll focus intensively in coming years on both the vision and the practical applications for system change.

This year, Eve Ensler will do a performance as a keynote: one act from her new three-act play, “The Fruit Trilogy.” It’s spine-tingling! Iroquois leader Katsi Cook will speak to the feminine from an Indigenous perspective and as a midwife and network organizer. Will Keepin and Cynthia Brix from Gender Reconciliation International will share their breakthrough work which has reached the national level in South Africa, which engages men as well as women to deconstruct the patriarchy. The powerhouse poet-performers-activists of Climbing PoeTree, Alixa Garcia and Naima Penniman, will bring alive their transformational work with women of color and marginalized communities.

Arts and culture are central to transformational change. Along with Eve Ensler’s performance, Xiuhtezcatl and his brother Itzcuauhtli Roske-Martinez will again rock the house, as well as Climbing PoeTree. London-based artist Louis Masai, who uses his work to highlight biodiversity challenges, will join us to do art live on the grounds with Bioneers youth leaders.