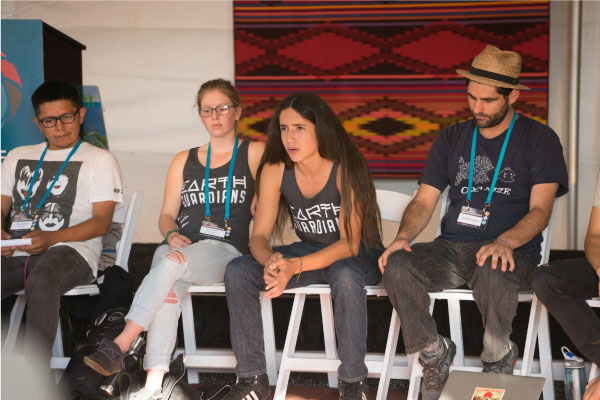 To us, the excitement among youth for Bioneers is perhaps the single biggest signal of health of our work and the organization. The 2015 Bioneers conference was a landmark for our Youth Leadership Program. Over 500 youth participated, about 20% of all participants. It marked a watershed moment.

In the early years after the program’s founding in 2001, we had to beg young people to come. Now we literally cannot keep up with the demand (sadly we had to turn away 300 more applicants last year). We deeply thank each of you who have helped make this momentous youth participation happen. Let’s make sure we don’t have to turn away so many more young people in 2016! What more important investment can we make?

As one example, take the story of Xiuhtezcatl Martinez, who first participated in Bioneers in 2014 and again in 2015, and has since become recognized as a global youth leader. Just in the past year, he has been at the forefront of a youth-led lawsuit against the federal government over climate change, which has repeatedly been upheld in federal and state courts, keynoted at the UN with Robert Redford, founded Rising Youth for a Sustainable Earth (RYSE), and the song he and fellow Earth Guardians wrote and performed was selected as the winner at the Paris Climate Summit!

Xiuhtezcatl not only performed and spoke at Bioneers – he offered to take a lead role in the Youth Tent where for two years he has inspired and supported hundreds of other youth to follow their activist paths. But what I did not know was the path that led him to this work.

When I interviewed Xiuhtezcatl last fall for the movie I’m making (Changing of the Gods: Planetary and Human Revolutions), he told the surprising story that you can hear in his own voice. When he was six years old, he saw Leonardo DiCaprio’s feature documentary The 11th Hour, for which I helped supply 30 bioneers as interview subjects who appear in the movie (I’m in it too.) The movie sparked an awakening that set him on his brilliant path as a change-maker and artist.

We often speak of Bioneers as broadcasting seeds, and you just never know where those seeds will land and find fertile ground. Our youth are the seeds of our future, and, as Xiuhtezcatl puts it, “I say, what better time to be alive than now because our generation gets to rewrite history. We get to change everything that we thought we knew about ourselves as people on this Earth. We get to change everything. And my generation gets to be at the forefront.”

We’re honored that Xiuhtezcatl will do a keynote at Bioneers 2016, as well as perform with his brother Izcuauhtli of Earth Guardians. We’re also thrilled that the 2015 “Youth Solutionaries” radio show (which features Xiuhtezcatl and other youth) won the Award of Excellence for radio in the global Communicator awards from over 6,000 entries!

What’s most unique about the Youth Leadership Program is its intergenerational mutual mentoring. After all, Bioneers is by its nature a community of mentors. The young people formally interact with wise, experienced visionary leaders, and the elders say they get even more than they give.

Let’s grow the 2016 Bioneers Youth Leadership Program into an unstoppable force in this world that so desperately needs the vision, voices and inspired leadership of our young people in an intergenerational partnership. Thank you!

Invest in Bioneers youth with a gift to the scholarship fund »