How Youth Have Changed the Climate Movement 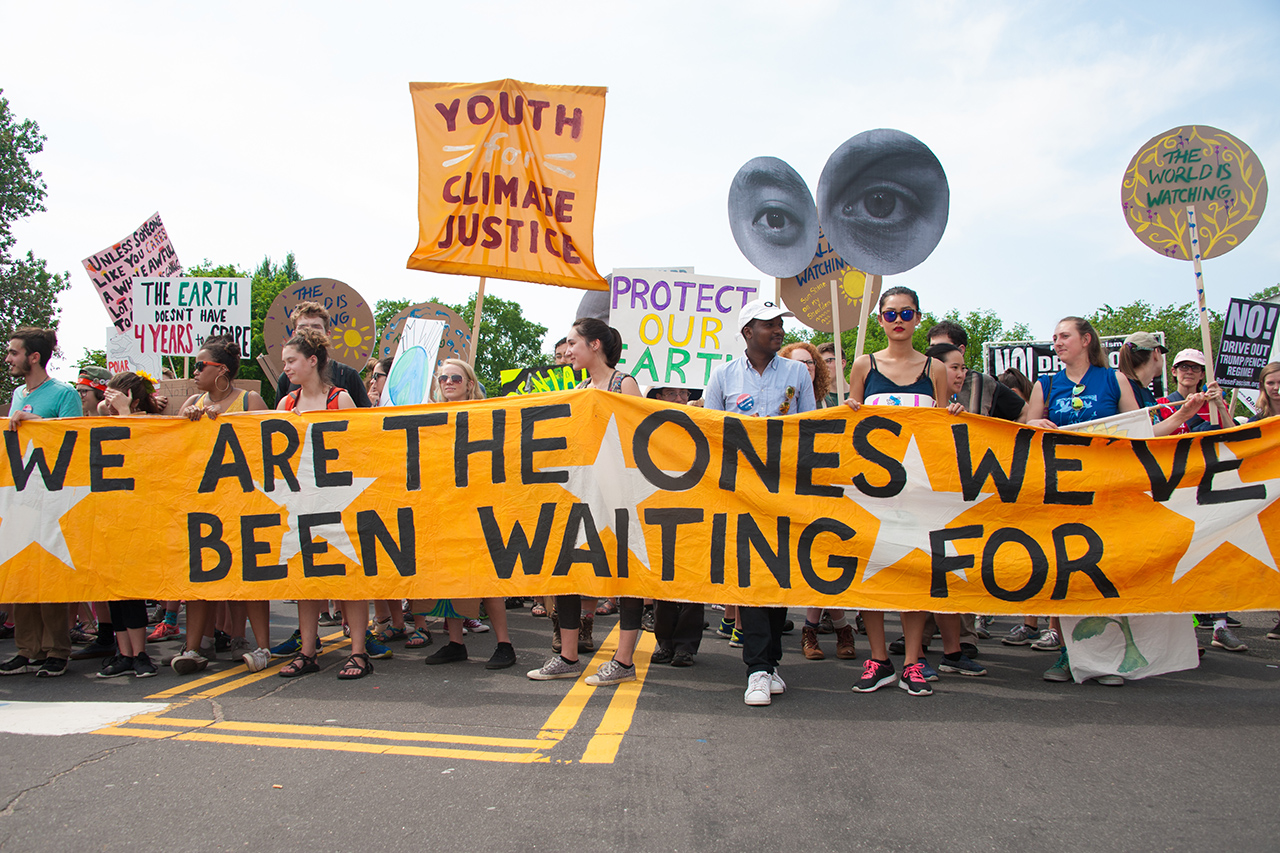 This article was originally published in Yes! Magazine and is licensed under Creative Commons.

“We do not inherit the Earth from our ancestors. We borrow it from our children,” affirms the Oglala-Sioux version of a belief common to several indigenous cultures. To David Brower, the “archdruid” founder of Friends of the Earth, and other environmentalists, “stealing it from our children” better characterizes modern humans’ degradation of the earth. The only hope, Brower declared nearly 50 years ago, is “what young people can do before older people tell them it’s impossible.”

The youth-led climate strikes in September that drew some 4 million marchers worldwide demand a far broader concept of democracy if the environmental goals they advocate are to be won. The climate-strike revolution represents a huge new step for human rights that expands hierarchical oppressions to include the dimension of future time. The young are a distinct class because they, not the old, will face climate change’s worst devastations

“We will be known as the solution to the climate crisis,” 17-year-old Nadia Nazar, co-founder of the youth-led climate activist organization Zero Hour, said this September in Washington, D.C. Later that week, 16-year-old Greta Thunberg addressed the United Nations General Assembly. “You have stolen my dreams,” she said, relegating older generations to past tense. “All you can talk about is money and fairy tales of eternal economic growth.”

Climate-change activism is not new, but the role of youth in it today is. Today’s youth reject the idea that they are junior auxiliaries to adult movements. They challenge the traditional rule of older people over the young, and, most radically of all, uphold the interests of future generations as equal to those of present ones. They find true elder wisdom manifest in hard science and lambaste the old as immature and selfish for rejecting that science. “Why do we have to clean up the mess that past generations, and your generation, has left us?” Nazar interrogated Congress members in February.

We oldsters may insist our developed, executive brains, moral reasoning, maturity, empathy, realism, and access to the wisdom of the past entitle us to decide the best interests of the young. But are elders really equipped to face the new challenges climate change brings?

Climate-change activism is not new, but the role of youth in it today is.

In a fascinating paper reinterpreting past research, professors Tomas Paus and Howard Sercombe find that youthful and aging brains really are different, though not in the us-versus-them way pop-media depicts. The wide-open neural connections in adolescence foster broader, more flexible thinking, while the “pruning” of neural pathways as adulthood progresses renders adult brains more efficient for a narrower range of tasks. Teenagers’ experimentations appear scattered and impetuous to elders while specialized, staid adults whose experience and efficiencies were vital to human survival in past millennia now appear overly rigid to youths.

These differences would seem to suggest that as rapid social and technological changes accumulate, generational power realignments are at hand. Youthful thinking across multiple dimensions is better at imagining innovative policies to adapt to future contingencies; elder thinking is suited to resolving the practicalities. That’s why elder-dominated media and leaders fixate on the short-range dollars-and-cents costs of change, while the climate-strike youth focus on the long-term price of inaction.

Yet, biology is not determinism, age influences but does not dictate mindset, and a generational war distracts us from pursuing crucial opportunities. We know 16-year-olds who would make great 75-year-olds, and vice versa. Ideally, old and young thinking works together.

Unfortunately, intergenerational cooperation hasn’t happened; even Democrats have been slow to the cause. “This country needs an all-out, all-of-the-above strategy that develops every available source of American energy.” That wasn’t an oil-state Republican talking, or someone from 1975. That was former President Barack Obama in 2012—after fossil-fuel’s damage was abundantly clear. Democratic presidential nominee Hillary Clinton waffled before cautiously opposing the Keystone Pipeline, a dirty-oil mega-project NASA’s James Hansen warned would spell “game over for the climate.”

Now, the divisions have become more serious. Climate politics reveals that as Democrats become more forceful on the issue, a far-right, nationalist upsurge is waging an all-out war on today’s young and the future. Powerful industry and right-wing forces invoke horror at conveniences and pleasures lost. Curtailed air travel! Tinier cars! No more hamburgers! Rightists seek retreat to enclaves insulated from the social changes they hate. Moderates are squeezed between climate-change activists brandishing science and a reactionary opposition brandishing denials and political threats.

World powers cannot devise a plan to achieve the urgent recommendation from the UN’s Intergovernmental Panel on Climate Change and Secretary-General António Guterres: greenhouse gas reductions of 45 per cent below 2010 levels by 2030, and net zero emissions by 2050. They can’t even meet the modest greenhouse-gas reductions in 2015’s 195-nation Paris Climate Agreement. Four of the six worst-offending nations are currently controlled by these right-wing anti-democratic movements: Russia, Saudi Arabia, Turkey, and the United States.

The potentially effective Green New Deal proposal led in Congress by U.S. Rep. Alexandria Ocasio-Cortez and U.S. Sen. Edwin Markey is mired in squabbles over its costs. Meanwhile, Miami Beach is spending $500 million to raise that small city’s streets 2 feet, a temporary fix for rising seas. How much will it cost to permanently raise or move many thousands of low-lying communities?

Younger generations are going to have to step up. Even American teenagers may be ready. Six out of seven youth ages 13 to 17 told a recent Washington Post-Kaiser survey, “human activity is causing climate change,” and four out of five called it a “crisis” or “major problem.” Majorities feel afraid, motivated, and angry. Among high school students, 40% say they have taken steps to reduce their carbon footprint, and one in four say they have participated in direct action.

While the survey reveals disappointing levels of confusion, it’s that activist fraction that will spearhead change. Even in oil-marinated Oklahoma, climate-change protests driven by high school and college students increased tenfold in size from last spring’s to September’s marches (I was at both and counted attendees). In a state whose leaders hold literal “oilfield prayer” days and fracking to extract natural gas releases greenhouse-promoting methane, youthful activists at least can laud their elders for one development: wind turbines now supply 43% of the electricity sold in Oklahoma.

“Adults won’t take climate change seriously,” wrote the lead organizers of US Youth Climate Strike, all of whom are ages 13 to 16. “So we, the youth, are forced to strike.” That’s a sentiment shared by many youth activists. But what does that mean? Even in its current state of fractionalized organization, youth-led activism is a formidable threat. Forty-two percent of the world’s population is 24 or younger. They will have to persuade older government, corporate, and institutional leaders to take dramatic action—or find ways to override them. Coming confrontations are likely to realign power relationships in unheard-of ways.

In the 2018 midterm elections in the United States, the most obstructionist nation under the presidency of Donald Trump, voters under age 25 (including young Whites) voted against anti-environment Republicans by 2-1 margins. And while a large majority of White voters ages 45 and older voted Republican, that still leaves a substantial number of even this conservative cohort to be potential allies of the young.

Young people see future-facing issues such as climate change, gun violence, human rights, proactive government, and globalism more clearly than older leaders but are denied pathways to power on account of their age. Extending voting and office-holding ages to 16 or even younger is crucial to bringing future-focused issues to the forefront. In an America whose leaders increasingly reject even short-term investments to fix bridges and fund schools, winning tough action on long-term threats like climate change demands a revolutionary reimagining of innovative solutions.

“We are on the verge of developing a new kind of culture,” Margaret Mead predicted in 1977 as her long anthropological career ended. “In this culture, it will be the child—and not the parent or grandparent—that represents what is to come.” Without decisive action, environmental degradation “will soon make our planet uninhabitable,” yet “the elderly are no longer the custodians of wisdom or models.” If climate-strike youth and their allies are to save humanity and vital ecosystems, prepare for changes in power dynamics beyond what we’ve ever seen.

MIKE MALES is a senior researcher for the Center on Juvenile and Criminal Justice, the principal investigator for YouthFacts, and the author of five books on American youth.

This article was originally published in Yes! Magazine and is licensed under Creative Commons.