The Secret to Funding a Green New Deal 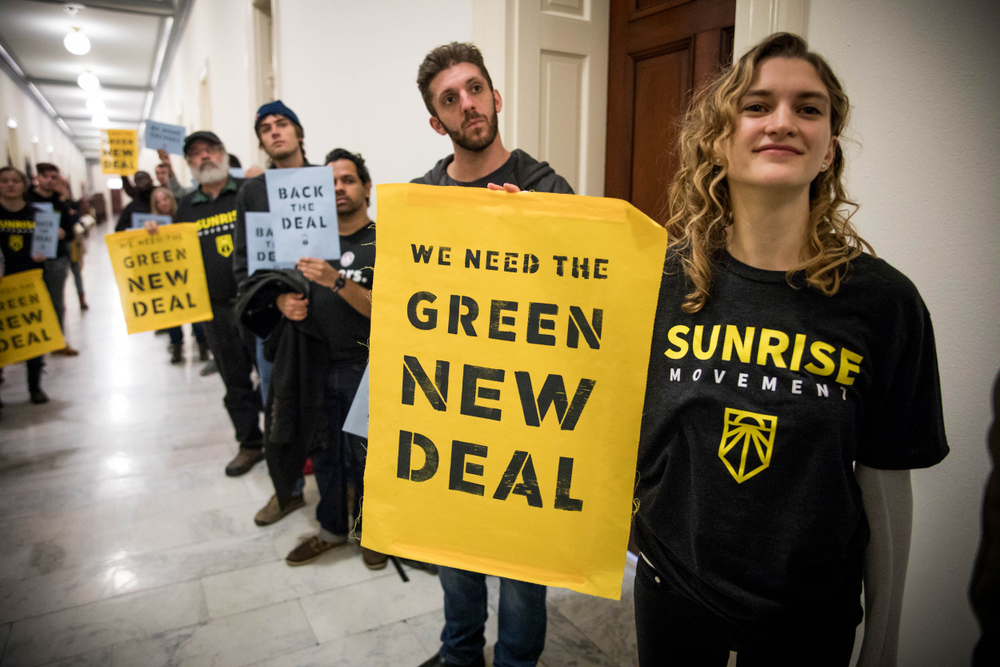 This article was originally published on TruthDig.

As alarm bells sound over the advancing destruction of the environment, a variety of Green New Deal proposals have appeared in the U.S. and Europe, along with some interesting academic debates about how to fund them. Monetary policy, normally relegated to obscure academic tomes and bureaucratic meetings behind closed doors, has suddenly taken center stage.

The 14-page proposal for a Green New Deal submitted to the U.S. House of Representatives by Rep. Alexandria Ocasio-Cortez, D-N.Y., does not actually mention Modern Monetary Theory (MMT), but that is the approach currently capturing the attention of the media—and taking most of the heat. The concept is good: Abundance can be ours without worrying about taxes or debt, at least until we hit full productive capacity. But, as with most theories, the devil is in the details.

MMT advocates say the government does not need to collect taxes before it spends. It actually creates new money in the process of spending it; and there is plenty of room in the economy for public spending before demand outstrips supply, driving up prices.

Critics, however, insist this is not true. The government is not allowed to spend before it has the money in its account, and the money must come from tax revenues or bond sales.

In a 2013 treatise called “Modern Monetary Theory 101: A Reply to Critics,” MMT academics concede this point. But they write, “These constraints do not change the end result.” And here the argument gets a bit technical. Their reasoning is that “the Fed is the monopoly supplier of CB currency [central bank reserves], Treasury spends by using CB currency, and since the Treasury obtained CB currency by taxing and issuing treasuries, CB currency must be injected before taxes and bond offerings can occur.”

The counterargument, made by American Monetary Institute (AMI) researchers, among others, is that the central bank is not the monopoly supplier of dollars. The vast majority of the dollars circulating in the United States are created, not by the government, but by private banks when they make loans. The Fed accommodates this process by supplying central bank currency (bank reserves) as needed, and this bank-created money can be taxed or borrowed by the Treasury before a single dollar is spent by Congress. The AMI researchers contend, “All bank reserves are originally created by the Fed for banks. Government expenditure merely transfers (previous) bank reserves back to banks.” As the Federal Reserve Bank of St. Louis puts it, “federal deficits do not require that the Federal Reserve purchase more government securities; therefore, federal deficits, per se, need not lead to increases in bank reserves or the money supply.”

What federal deficits do increase is the federal debt; and while the debt itself can be rolled over from year to year (as it virtually always is), the exponentially growing interest tab is one of those mandatory budget items that taxpayers must pay. Predictions are that in the next decade, interest alone could add $1 trillion to the annual bill, an unsustainable tax burden.

To fund a project as massive as the Green New Deal, we need a mechanism that involves neither raising taxes nor adding to the federal debt; and such a mechanism is proposed in the U.S. Green New Deal itself—a network of public banks. While little discussed in the U.S. media, that alternative is being debated in Europe, where Green New Deal proposals have been on the table since 2008. European economists have had more time to think these initiatives through, and they are less hampered by labels like “socialist” and “capitalist,” which have long been integrated into their multi-party systems.

A Decade of Gestation in Europe

The first Green New Deal proposal was published in 2008 by the New Economics Foundation on behalf of the Green New Deal Group in the U.K. The latest debate is between proponents of the Democracy in Europe Movement 2025 (DiEM25), led by former Greek finance minister Yanis Varoufakis, and French economist Thomas Piketty, author of the best-selling “Capital in the 21st Century.” Piketty recommends funding a European Green New Deal by raising taxes, while Varoufakis favors a system of public green banks.

To ensure that these bonds do not lose their value, the central banks would stand ready to buy them above a certain yield. “In summary, DiEM25 is proposing a re-calibrated real-green investment version of Quantitative Easing that utilizes the central bank.”

Public development banks already have a successful track record in Europe, and their debts are not considered government debts. They are financed not through taxes but by the borrowers when they repay the loans. Like other banks, development banks are money-making institutions that not only don’t cost the government money but actually generate a profit for it. DiEM25 collaborator Stuart Holland observes:

While Piketty is concerned to highlight differences between his proposals and those for a Green New Deal, the real difference between them is that his—however well-intentioned—are a wish list for a new treaty, a new institution and taxation of wealth and income. A Green New Deal needs neither treaty revisions nor new institutions and would generate both income and direct and indirect taxation from a recovery of employment. It is grounded in the precedent of the success of the bond-funded, Roosevelt New Deal which, from 1933 to 1941, reduced unemployment from over a fifth to less than a tenth, with an average annual fiscal deficit of only 3 percent.

Roosevelt’s New Deal was largely funded through the Reconstruction Finance Corporation (RFC), a public financial institution set up earlier by President Hoover. Its funding source was the sale of bonds, but proceeds from the loans repaid the bonds, leaving the RFC with a net profit. The RFC financed roads, bridges, dams, post offices, universities, electrical power, mortgages, farms and much more; and it funded all this while generating income for the government.

A System of Public Banks and “Green QE”

The U.S. Green New Deal envisions funding with “a combination of the Federal Reserve [and] a new public bank or system of regional and specialized public banks,” which could include banks owned locally by cities and states. As Sylvia Chi, chair of the legislative committee of the California Public Banking Alliance, explains:

The Green New Deal relies on a network of public banks — like a decentralized version of the RFC — as part of the plan to help finance the contemplated public investments. This approach has worked in Germany, where public banks have been integral in financing renewable energy installations and energy efficiency retrofits.

Local or regional public banks, Chi says, could help pay for the Green New Deal by making “low-interest loans for building and upgrading infrastructure, deploying clean energy resources, transforming our food and transportation systems to be more sustainable and accessible, and other projects. The federal government can help by, for example, capitalizing public banks, setting environmental or social responsibility standards for loan programs, or tying tax incentives to participating in public bank loans.”

U.K. professor Richard Murphy adds another role for the central bank—as the issuer of new money in the form of “Green Infrastructure Quantitative Easing.” Murphy, who was a member of the original 2008 U.K. Green New Deal Group, explains:

All QE works by the [central bank] buying debt issued by the government or other bodies using money that it, quite literally, creates out of thin air. … [T]his money creation process is … what happens every time a bank makes a loan. All that is unusual is that we are suggesting that the funds created by the [central bank] using this process be used to buy back debt that is due by the government in one of its many forms, meaning that it is effectively canceled.

The invariable objection to that solution is that it would act as an inflationary force driving up prices, but as argued in an earlier article of mine, this need not be the case. There is a chronic gap between debt and the money available to repay it that needs to be filled with new money every year to avoid a “balance sheet recession.” As U.K. professor Mary Mellor formulates the problem in her book “Debt or Democracy” (2016):

A major contradiction of tying money supply to debt is that the creators of the money always want more money back than they have issued. Debt-based money must be continually repaid with interest. As money is continually being repaid, new debt must be being generated if the money supply is to be maintained. … This builds a growth dynamic into the money supply that would frustrate the aims of those who seek to achieve a more socially and ecologically sustainable economy.

In addition to interest, says Mellor, there is the problem that bankers and other rich people generally do not return their profits to local economies. Unlike public banks, which must use their profits for local needs, the wealthy mostly hoard their money, invest it in the speculative markets, hide it in offshore tax havens or send it abroad.

To avoid the cyclical booms and busts that have routinely devastated the U.S. economy, this missing money needs to be replaced; and if the new money is used to pay down debt, it will be extinguished along with the debt, leaving the overall money supply and the inflation rate unchanged. If too much money is added to the economy, it can always be taxed back; but as MMTers note, we are a long way from the full productive capacity that would “overheat” the economy today.

The QE program that was put in place between 2009 and 2012 had just one central purpose, which was to refinance the City of London and its banks. … What we are suggesting is a smaller programme … to kickstart the UK economy by investing in all those things that we would wish our children to inherit whilst creating the opportunities for everyone in every city, town, village and hamlet in the UK to undertake meaningful and appropriately paid work.

A network of public banks, including a central bank operated as a public utility, could similarly fund a U.S. Green New Deal—without raising taxes, driving up the federal debt or inflating prices.

Ellen Brown is an attorney, chairman of the Public Banking Institute, and author of twelve books including “Web of Debt” and “The Public Bank Solution.”

This article was originally published onTruthDig.