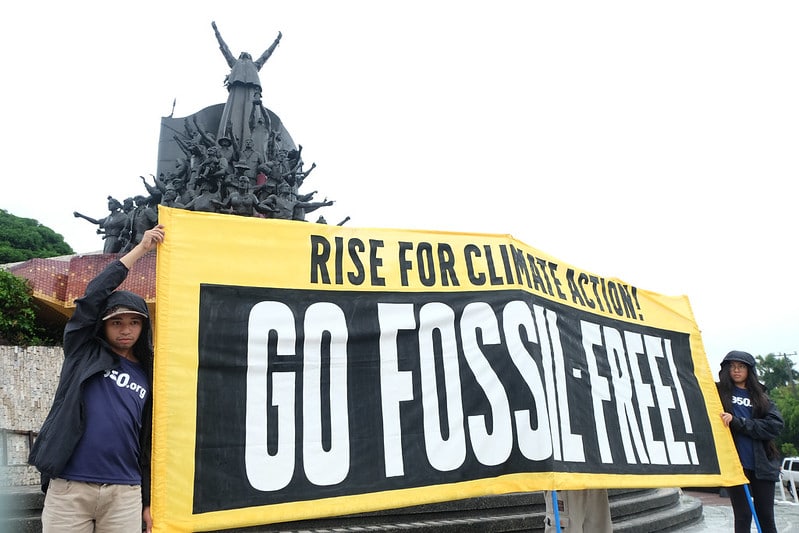 This article was originally posted on 350.org

Putin’s invasion of Ukraine has shocked the world. We stand, along with millions of others, in solidarity for Ukrainians at this time of unimaginable hardship. Underlining this solidarity should be a vision for a more peaceful, secure future free of fossil fuel dependency.

The invasion has highlighted the core role that fossil fuels play in driving conflict and have become a key battleground upon which this war in particular, and responses to it, are being played out. As long as we are dependent on fossil fuels, our geopolitical, economic, and energy security will be at the behest of an ever-changing political-economic landscape that climate change will only exacerbate.

As the IPCC’s Sixth Assessment Report on climate impacts, adaptation, and vulnerability released last week confirmed, the effects of climate change are manifesting at a faster rate than scientists had predicted. The report confirms that unless drastic action to limit greenhouse gas emissions are enacted swiftly, we will miss the short window we have to avert the worst impacts of climate change. It’s not too late, but we must act now.

We need a concerted government-sponsored push to energy efficiency and renewables. Rather than replace one source of fossil fuels with another, we must use our collective power to demand from our leaders that they invest in a new path forward. It’s our responsibility, as the climate movement, to raise our voices louder than the vested interests in the fossil fuel industry are doing. We are calling for a radical shift to renewable energy — for a more resilient, peaceful, and secure future.

Fossil fuels create conflict, and are the backbone of Russia’s power

The invasion of Ukraine demonstrates how our dependence on Russian oil and gas enables dictators like Putin to use fossil fuel money to carry out and sustain devastating wars. As the second-largest exporter of gas and the third largest exporter of oil, the Russian economy is heavily dependent on oil and gas exports, which make up 36% of the country’s total budget. Oil and gas also contribute significantly to Putin’s personal wealth while fueling the country’s military resources and keeping the Russian currency, the Ruble, afloat.

25% of Europe’s oil and 40% of its fossil gas comes from Russia. Russia’s position as one of the world’s dominant energy suppliers serves as a point of leverage for Putin geopolitically — particularly in Europe — as Western leaders know that directly sanctioning the supply of oil and gas would create dire economic hardship for their constituents. If Putin decided to hold hostage Russia’s supply of oil to Europe, prices would directly impact the livelihoods of millions of people who depend on it.

The fossil fuel industry’s response to the invasion

Since the start of the war, the tightening of supplies of oil and gas coming out of Russia have resulted in a sharp rise in prices globally. The fossil fuel industry outside Russia didn’t waste any time in attempting to leverage this situation in their favor. On February 24th, the day of the invasion, the American Petroleum Institute called for increasing fossil fuel extraction saying it was ‘crucial’ that the United States invest in more pipelines, drilling, and fracking.

In response to the invasion, we are seeing Western fossil fuel companies announce their intention to pull out of the country. BP announced it will cut ties with Russia’s state-owned oil company Rosneft, a significant development as the company constitutes the biggest foreign investor in Russia, and abandoning its stake will amount to a $25 billion loss while shrinking its oil and gas reserves in half.

ExxonMobil has newly released a statement announcing it will comply with sanctions imposed on Russia by “discontinuing operations and developing steps to exit the Sakhalin-1 venture” (a project which has exported over 1 billion barrels of oil and 1.03 billion cubic feet of natural gas since it began operations in 2005). Shell has announced plans to exit operations in Russia including its flagship Sakhalin 2 LNG plant, Engie of France, ENI of Italy, Equinor of Norway, and Uniper of Germany have stated intention to pull out out varying degrees.

In President Biden’s State of the Union address on March 1st, he announced the US and its allies will release 60 million barrels of oil to help alleviate the surge in prices that will come as a result of sanctions against Russian oil, with US oil accounting for half of this amount.

The fossil fuel industry has never done anything like this. It’s a clear signal that a major shift in global energy markets is underway. We need to demand that our leaders direct that shift towards clean energy, not more fossil fuels.

We need a just transition to renewable energy, now

Germany has responded by announcing it will move up its 100% renewable energy goals to 2035, rapidly accelerating expansion of wind and solar power and moving off from fossil fuels fifteen years sooner than it had previously declared. This is a significant step, and we’d love to see more of this climate leadership around the world. As we move further towards reducing dependency on gas and other fossil fuels, any one country or leader’s decision to cut off supply will lose its leverage.

We in the climate movement are the counter-voice to the fossil fuel industry. If we don’t speak up, the only voice making demands of our politicians are fossil-fueled voices. In our globalized world, crises like this impact us all, though not equally.

The latest IPCC report concluded with the following statement: “climate change is a threat to human well-being and planetary health. Any further delay in concerted anticipatory global action on adaptation and mitigation will miss a brief and rapidly closing window of opportunity to secure a liveable and sustainable future for all”.

We stand in solidarity with the people and communities affected by this attack on their lives and livelihoods, and fully support Ukrainian calls for sanctions, international solidarity and resources. People in Ukraine, like people on the frontlines of the climate crisis, are demanding an end to economic systems that allow their lives to be thrown into violent chaos on the whims of despots and profiteers.

It is our responsibility to show leaders that a transition to renewable energy is the only promising pathway to bringing about the peace and resilience we all deserve. A better world is possible.