The Black Panther Viewing Guide brought to you by Intelligent Mischief, Mobilize the Immigrant Vote, and Movement Strategy Center 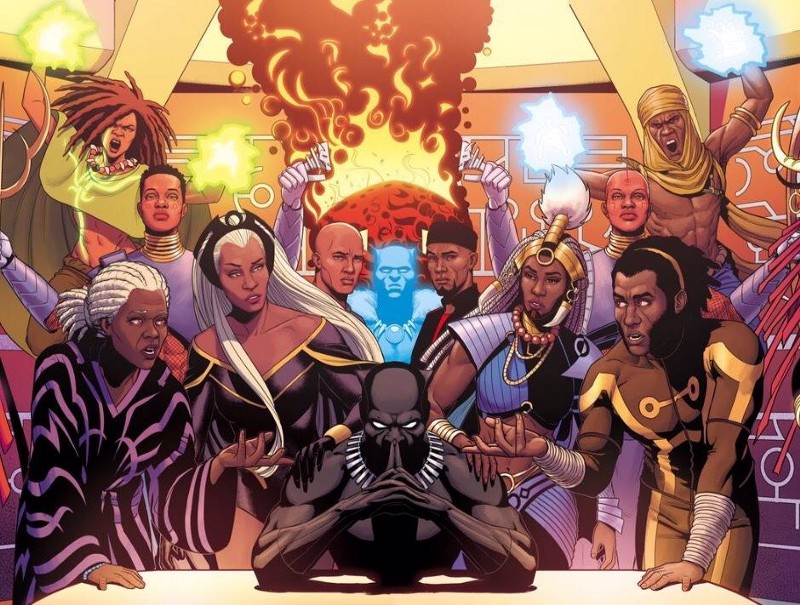 This article originally appeared on Medium and is re-posted with the permission of Intelligent Mischief, Mobilize the Immigrant Vote, and Movement Strategy Center.

Marvel’s Black Panther is coming to theaters across the world on February 16th and it’s already breaking records. Black communities, fans of Black Panther, fans of the Avengers and others are in full blown Panther fever at this point. The excitement is palpable. We can hardly wait!

Because of its setting in a wealthy African nation that was never colonized and enjoys indigenous sovereignty, we can look at Black Panther as a blueprint for Black Liberation, which begets liberation for all. Wakandans are a free black people, never colonized, never enslaved, wealth intact etc. As actor John Kani (T’Chaka) said, ‘it is what life for black people might have looked like if black people had never been oppressed’. And that is a big deal! Most Western made movies that depict blackness shed light on black people’s oppression, or black people succeeding in the face of oppression, or black people succumbing to oppression. Our movies are about black people escaping slavery, escaping poverty, shifting narratives, defying stereotypes. Essentially we are depicted as a people who are inherently in struggle. The world of the Black Panther is so intriguing because it invites us to imagine a normal where Black People have NEVER BEEN OPPRESSED. And, it shows that had that been the case we would not only be on par with other peoples, the innovation and knowledge or our peoples would not be stolen and trademarked or unrecognized, and we would be shining beacons of technology and brilliance.

Seeing Wakanda brought to life on the screen can help our communities to see and then further imagine what our own communities might look like when we are free.

This viewing guide is intended to support you in using the concepts, imagery and principles of Black Panther to imagine and engage your communities in creating a blueprint for #FreedomCities, cities and communities in which communities of color, queer, trans, immigrants and Muslims are free and thriving.

We’re creating this guide based on the canon derived in the comic book series and cartoons. It doesn’t contain any spoilers for the film itself. If you haven’t read the comics before there are some key concepts referred to here that you may only discover for the first time when watching the film. That MIGHT feel like a spoiler. We’re not sure what to do about that (lol). It is actually really helpful to read the comics to prepare for watching the film anyway.

In the comic storyline Wakanda is currently a constitutional monarchy in transition. Within the old governance structure there was a Council of Elders, made up of elected representatives from the 18 self-governing tribes of Wakanda, that was presided over by the ruling Black Panther.

Vibranium as a natural resource. Owned by the state and distributed to the people of Wakanda making it one of the richest nations on Earth. Wakandans do not over exploit their vast natural resources. They have developed a sustainable relationship to resource extraction and the Earth. And, all Wakandans have what they need to live to their full potential.

How do we ensure that everyone has what they need to survive and live healthy lives? How do we ensure that resources are equitably distributed in Wakanda? What is the relationship we want between our labor and our income and access to the resources we need for our well-being? What can we do to ensure healthy environments in which we live, work, and play and maintain harmony with nature?

The Black Panther can be a woman. When T’Challa is joining the Avengers during Civil War, Shuri is the Black Panther. In addition Shuri, T’Challa’s sister is the most brilliant scientist on earth…well at least she is smarter than Tony Stark lol. Other powerful roles played by women include the Dora Milaje — an all women team of warriors who protect the king and nation.

What is the role of gender in Wakanda? How do we ensure that no one is limited by arbitrarily defined gender identities or roles in service of community? How do we create cities and communities where people of all genders are equally respected and valued, and thrive?

In World of Wakanda (series that focused on the Dora Milaje) Ayo and Akaye, fall in love and create a women’s protection movement known as the Midnight Angels. We’re not sure if or how the movie will deal with this but now it is part of the general canon.

How can Wakanda be a place that celebrates and protects the diverse sexual expressions of all Wakandans?

Wakanda possesses a rich and complex culture which cherishes technological progress alongside arcane traditions. Innovation and heritage side by side. It’s Birnins (Cities) are the most advanced on Earth, but many people prefer the rural countryside, attuned to ancestral spirituality. For every Birnin technician, numerous farmers and artisans thrive in suburban regions.

Why would Wakandans root their lives in both spirituality AND technological progress?

Wakanda deploys the most sophisticated learning tools on earth to ensure they secure the best possible education.

Why does Wakanda ensure all Wakandans have a formal education? How do all Wakandans benefit from education taking into account different individual learning needs and styles?

From birth all Wakandans are joined in a nation wide intranet system through Kimoyo (‘of the spirit’) beads. Linked up through a Vibranium-based supercomputer, Wakandans can access holographic links to the national database, connect to their healthcare system, telecommunications and entertainment system. Mad high tech but balanced with deep commitment to tradition. Wakandans’ connection to technology doesn’t seem to take away from people interacting with each other.

What inspires Wakandans’ trust for their leaders that they unquestioningly join the nationwide intranet? How do Wakandans balance being connected to and through technology, with having person to person relationships?

Wakanda is mysterious on the global scale. Keeps itself secret for self-preservation while still participating in global diplomatic conversations.

The world is increasingly interconnected such that crises in one place typically have a ripple effect and reach other far flung places. What could it look like for Wakanda to welcome and be a home for both African and non-African people seeking refuge from war, natural and human-made disasters, persecution, and other hardships in their nations? What does Wakanda potentially gain or lose by opening up to outsiders?

The Dora Milaje & The Hatut Zeraze (Dogs of War) operate as the security for the Kingdom and the security police respectively. The Hatut Zeraze grew out of former King Azzuri the Wise’s spy ring to keep track of foreign governments and their level of threat to Wakanda during World War 2. They were later taken over by Hunter (T’Challa’s step brother) and turned into a deadly secret police force that commited crimes against political dissidents. T’challa disbanded them upon learning of the crimes. Shuri; during her reign; reformed them into a elite fighting force “that posses the latest technology in weapon, combat training and surveillance to protect the nation”.

What are the safeguards in place to ensure that Hatut Zeraze are there to protect all Wakandans? What does it look like for leaders of Wakanda to hold space for political dissent/disagreement with outcomes that uphold the humanity of all? What does restorative justice look like in Wakanda?