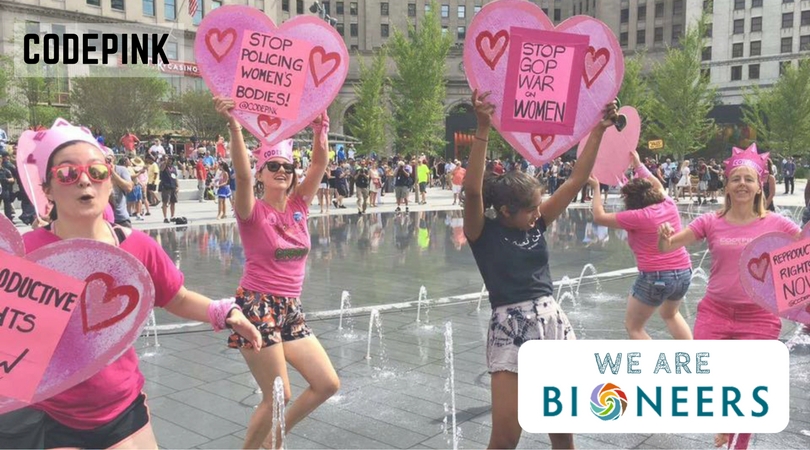 When Jodie Evans tells the beginning of CodePink’s story, she repeatedly relies on the term “unreasonable women.” It’s a term Evans picked up from author, eco-warrior and long-time Bioneer Diane Wilson, who used “unreasonable women” — adapted from a George Bernard Shaw quote — to describe women who refuse to conform to the world around them.

While CodePink was established by “unreasonable women,” the mission of the grassroots organization is, at its core, not all that unreasonable. Co-founded by Evans and two fearless friends, CodePink is “working to end U.S. wars and militarism, support peace and human rights initiatives, and redirect our tax dollars into healthcare, education, green jobs and other life-affirming programs.”

CodePink — which is led by women but inclusive of people who identify anywhere along the gender spectrum — organizes to protest war crimes, oppression, torture and violence. In short, the organization exists to push for a more peaceful world.

Evans traces the first spark of CodePink back to a conversation with Bioneers co-founder Nina Simons more than 15 years ago. After attending a Bioneers conference, she and Nina traveled to a retreat, where they chatted about previous women’s events they had each attended. Determined to find effective ways to organize women for large-scale change, Evans, Simons, and a handful of colleagues and friends took the first steps toward the creation of Unreasonable Women for the Earth: the first iteration of CodePink.

The organization’s first collaborative act was to join a hunger strike with Diane Wilson — the original “unreasonable woman,” herself — in the Gulf of Mexico. The strike was a continuation of one in India, where a campaign was attempting to hold Dow Chemical accountable for a large toxic disaster at one of its factories in the 80s that killed and injured thousands of people in the city of Bhopal.

Soon after, Evans and her fellow protesters caught wind of an upcoming announcement by then-President George W. Bush of a preemptive strike on Iraq. The early organizers of CodePink journeyed to the White House to protest the move against what Evans calls an “innocent country.” War and bloodshed in the Middle East continue to be one of the organization’s primary concerns.

Moving Toward a Movement

CodePink’s coming out took place at a subsequent Bioneers conference, says Evans. “It was our first major Pinkness,” she says with a laugh. “We were in the back corner, and we painted people’s fingernails pink. We lit up the whole space with pink lights. You couldn’t miss us. That was the first time people were exposed to CodePink. I still hear people say, ‘Oh, I remember meeting you at Bioneers.’”

Since that coming out, CodePink has continued to grow and support women-led action across the country and world. Evans has been involved with the conference on an individual level as recently as 2015. She was on the Bioneers Board of Directors for several years, and assisted with women’s programming at the conference as well.

Today, CodePink’s major initiative is helping Americans divest from the War Economy. “We are right now launching a Divest from the War Machine campaign to show people how weapons and war and the stimuli of our lives are related to making a killing on killing,” she says.

Certainly, in Evans’ life and in the lives of countless women, Nina Simons has been a peaceful — but still “unreasonable” — changemaker. “Nina understands the value of culture and that culture acculturates all of our patterns, behaviors, and practices,” says Evans. “Nina’s really understood that and then made sure that that was always a part of a Bioneers gathering. I’ve been blown away by the people that she’s nourished and nurtured. In a way, Bioneers has a contributed to a culture. Much of that culture piece is Nina’s.”