We’re in a Moment of Collective Trauma. But There Are Glimmers of Hope. 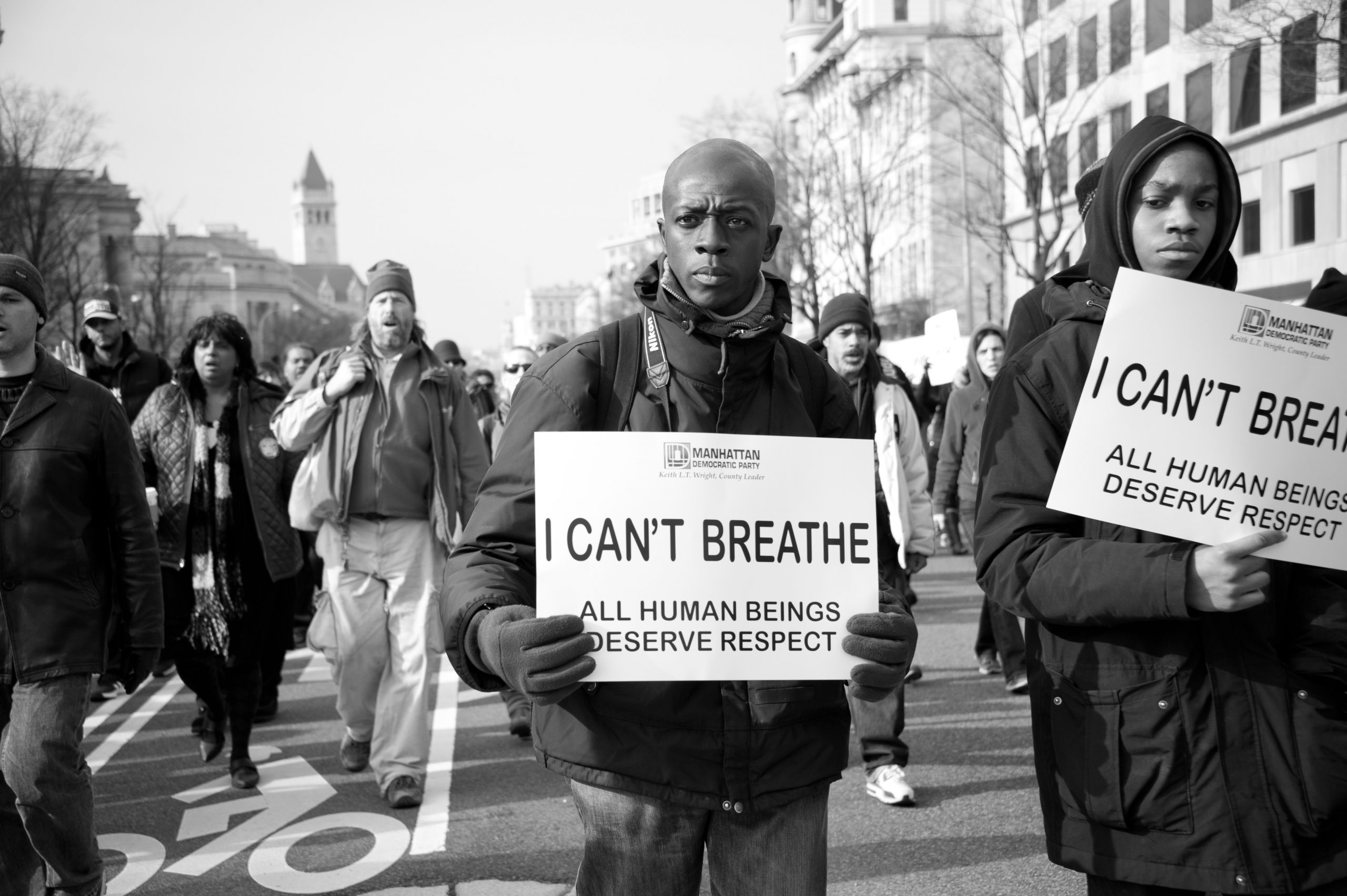 I’m writing firstly to express my sincere condolences to the families of George Floyd, Breonna Taylor, Ahmaud Arbery, and the many others who have been killed in recent months at the hands of police and related violence, including the protesters who lost their lives over the weekend around the country demanding their voices be heard, and their grievances be addressed.

I also want to acknowledge the profound grief and trauma being experienced particularly in Black communities which, after centuries of struggle for freedom and equality, have seen the struggle move with fits and starts. Now we are in a situation where many of the country’s resources are being used to terrorize the Black community and others who would stand up for justice. With the collective trauma that the nation is facing, it is more than understandable to despair.

And yet, we must resist this inclination. Not only because there are glimmers of hope and cracks in the solid wall of injustice and hatred, but also because our care for the world calls on us to keep the struggle for love and humanity alive. This does not mean we do not despair, feel pain, and just get tired. But these feelings are only part of who we are and who we insist on becoming. We must acknowledge our pain and embrace hope at the same time.

It is not surprising in a country that has a long history of anti-Black racism, fear of Black bodies and a criminal justice system that does not see the humanity of Black and Brown people that there will be a continued killing of Blacks with impunity. There was some hope that if these killings could be recorded, their frequency would slow down, if not end. But this would only be true if police who murder Blacks were punished by the state. In most cases they were not.

Also: Listen to prof. powell speak on the murder of George Floyd in this podcast

Social unrest resulting from the massive inequalities experienced in Black communities, ignited almost always by state violence, has been with me my entire life. I was 20 years old at the time of the uprising in my home city of Detroit in 1967. It took place over many days, left many people dead, and was just one of the dozens of similar events that erupted in cities around the country that year prompting President Johnson to form what would be called the Kerner Commission to investigate the root causes of the unrest.

The findings of the commission—poor housing and schools, high unemployment, police violence and lack of accountability, and others—still apply today. If we just take the last point on the relationship of the police to the Black community, some of the recent events we’ve witnessed reveal something interesting on how the perpetrators understand the nature of those relationships.

In the case of Amy Cooper, the white woman who called the police on a Black man in Central Park after he asked her to leash her dog, just take note of what she did.

She threatened and then acted on the threat to call the police. She said an African American man was threatening her, which he wasn’t. She was in fact threatening him. She could only do that because of the history that we all share.

She believed she could summon the police to bring the raft of the state onto the body of a Black man. She knew that being a Black man or woman alone could expose you to racialized state violence, especially where white women are concerned. But how did she know that? Where did she learn that she had the ability to call the police, lie, and potentially have a Black man beaten, arrested, or even killed for merely asking that she follow the rules?

Black people have known for generations the danger of standing up to white people even to exercise what should be basic rights. Whites have the power of the state to protect their prerogatives no matter how small or petty. But the white community often denies this reality. Amy did not just acknowledge it, she threatened, then tried to use it.

In the case of George Floyd, how did the police know they could kill a Black man, on camera, and in such cavalier fashion as demonstrated by the posture of the officer who was suffocating his victim, and not have to answer for it?

He kneels with his knee on George’s neck for more than 8 minutes while being filmed and ignoring the pleas of George and bystanders. The witnesses and cameras are of no concern. Like Amy, he knows he can call on the state to protect him in the killing of Black bodies when a police officer is involved. He is doing his job, and Blacks are expendable.

The brutal murder of Ahmaud Arbery as he jogged down a road in Georgia is another example of this understanding. The perpetrators went more than two months without being arrested, until video surfaced revealing the shocking nature of the crime.

And in case one thinks that the solution is for Black people to stay home, just remember how the life of Breonna Taylor was cut short while she was sleeping in her house with her boyfriend. The only charge brought in that case thus far was not against the police who shot Breonna 8 times while firing 20 rounds of bullets, but against Breonna’s boyfriend who tried to protect her and himself from unannounced intruders.

What these cases reveal is that yes, police officers, but even liberal whites like Amy Cooper, understand how the relationship between institutions and different racial groups truly functions. They are cognizant of the role police play as an instrument to protect white society, and to harm Black and Brown bodies, even if that reality goes against official narratives and codes of ethics.

So, where are the glimmers of hope I mentioned earlier?

In each of those cases with the exception of Breonna’s, we witnessed subsequent actions taken against the perpetrators, contrary to how prevailing logic until now has played out. Amy lost her job and was widely censured almost immediately. The two men who killed Ahmaud Arbery were finally arrested, and their actions widely denounced, even by the right-wing governor of Georgia and many conservative officials. And perhaps most significant were the subsequent actions to the murder of George Floyd.

In that case, the four police officers involved in George’s murder were fired within a day of the killing, even before demonstrations erupted. The mayor of Minneapolis and governor of Minnesota expressed shock and demanded justice. The mayor in one of his press conferences had to fight back tears as he described what the police had done. Police chiefs and police unions, which typically form a blue shield to protect their officers from the consequences of their crimes, issued a flurry of statements denouncing those responsible for his killing. And then just four days after the killing, one of the officers was arrested and charged with murder.

We’re even witnessing similar reactions and statements of solidarity from corporations, and international figures. A number of the major tech companies have expressed disgust. The head of Target, after having a store looted, expressed support for the demonstrators. The Prime Minister of Canada spoke passionately about addressing not prejudice, or implicit bias, not even racism, but specifically anti-Black racism. While the Black community has raised its voice to say enough, their voices have been joined by other voices and other communities in many parts of the United States, and indeed the world.

The extent and expediency in which these actions were taken are unprecedented. While there remains strong anti-Black sentiments in our governments and institutions, led by the White House, there is a crack, a glimmer.

To be clear, I’m not saying this is enough. The work is far from over in the larger goal of creating a just society where institutions, including the police, serve all people. What I am saying is that fissures are beginning to appear in the system. And when cracks start to show, we have to keep on hammering.

We also have to recognize that we are in a country where anti-Black racism runs deep, and there is much suffering visited upon Black people. My family and I have been the subjects of white violence against Blacks. Sometimes the violence is physical. Sometimes it is emotional. Often it is both. And yet, there is a glimmer. We must hold on to that as well.

This requires acknowledging and welcoming all those who truly stand for a country where all people count. This may be difficult. And it is understandable if some reject this or are not quite ready. But this is how we gain power. This is how we support humanity. This is how we nurture love. This is how we build belonging.

When we experience injustices like those that the people of our country are currently responding to in the streets, we should be upset. There will be more police brutality and killing as the police and military is egged on by Trump’s call for dominance. We should protest. We should organize. We should demand that police departments across the country be held accountable when they violate the law.

But we also need to remember that policing is but a single component of the larger system of oppression so acutely felt in the Black community. That means we simultaneously need to continue to fight for housing justice, school reforms and integration, job opportunities, and healthy neighborhoods. We are not just fighting for justice in our relationship with the police. We are fighting for the full humanity of Black people.

If we get fatalistic, if we believe nothing will ever change and give up, then we’ve sealed that fate. But if we recognize this moment as an opportunity to invite new people into our movements and propel forward with unstoppable force, then we can cause that wall of injustice to crumble, and replace it with a system that works for all of us. We can build a circle of humanity where no one is outside.