Amy Goodman: Back to Bioneers 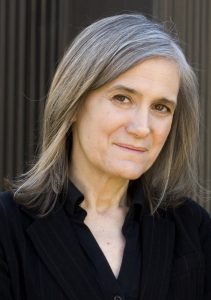 “I think the media can be the greatest force for peace on earth.” – Amy Goodman

Long before fake news infected our body politic and the web exploded with a million points of misinformation, the news was controlled by a few mega corporations. Each of them with varying degrees of deference to the defense contractors, polluters, drug makers and other assorted Goliaths that grease the wheels of our so-called democracy.

It was up to a small band of outsiders to provide an alternate set of facts to counter the narrow spectrum of what made up the acceptable narrative. Back then we were called the independent media.

Like many members of this outsider band coming of age in the late 90s and early “oughts,” one of our heroes was Amy Goodman, host of Democracy Now! She deconstructed the structures of power with a calm poise that was everything the blow-dried network anchors weren’t.

If journalism is history’s first draft, Amy was providing footnotes in real time.

Today, she’s reached iconic status as one of the paragons of the progressive media, giving voice to the often intertwined struggles of indigenous peoples, environmental activists, criminal justice reform, and a myriad of other movements who have blossomed over the course of the last two decades.

Despite the electoral college triumph of Trump’s America, all indicators show the nation is becoming more tolerant, is showing more respect for nature and is more open to economic justice issues than ever before. A big part of these encouraging trends are progressive communicators like Amy Goodman.

Democracy Now! started in 1996 as a community radio show in New York, and she soon attracted a dedicated group of fearless young journalists who often joined her putting their lives on the line to report the truth. In Nigeria, Amy and future bestselling writer Jeremy Scahill reported on Chevron’s role in the ongoing conflict between the government and indigenous tribes pushing for the energy giant to stop drilling on their land. As a result of their reporting, the company was forced to acknowledge it helped transport troops to a remote village where innocent civilians were massacred. The documentary won the George Polk Award, one of the numerous awards Amy has earned, including the Right Livelihood Award, sometimes called the alternative Nobel.

The turning point for Amy’s’ professional career came on the week of 9/11, when coincidentally the show added a video feed. That soon evolved into a full-fledged television broadcast, chronically reporting the worst abuses of Bush’s fledgling so-called “war on terror”. From that one public access station in New York, demand for the show spread, reinvigorating public access stations around the country with an increasingly robust daily news show. Today, Democracy Now! is on a staggering 1,400 television and radio stations around the country, is translated into Spanish, and is an integral part of millions of progressive media diets.

Last year, Amy proved her mettle again. Braving the elements of the North Dakota fall, she was arrested while covering the native uprising against the Dakota Access Pipeline. Her arrest helped build momentum for the inspirational, intersectional stand against fossil fuel expansion. Soon after, major media outlets began covering what had been little more than obscure Facebook post for most Americans. And two months later, President Obama ordered the pipeline construction to halt.

Amy Goodman will be back at the Bioneers’ stage in October as a key note for this year’s Bioneers Conference. She will tell us about the first 20 years of Democracy Now! and the journey to stay true to its original mission of “going to where the silence is and giving voice to the movements that are shaping our world”. And for a taste of what’s like to see Amy live, watch the video of her talk at the 2006 Bioneers Conference.

You don’t want to miss it! Early-bird tickets end on July 31. Buy yours now!

Anthony Lappé is an independent writer and television producer. His most recent series is the four-part docs-series America’s War on Drugs for HISTORY, airing 9 pm ET June 18-21.