Ancient Arctic Wisdom and Cutting-Edge Sounds: An Interview with Zarina Kopyrina of OLOX 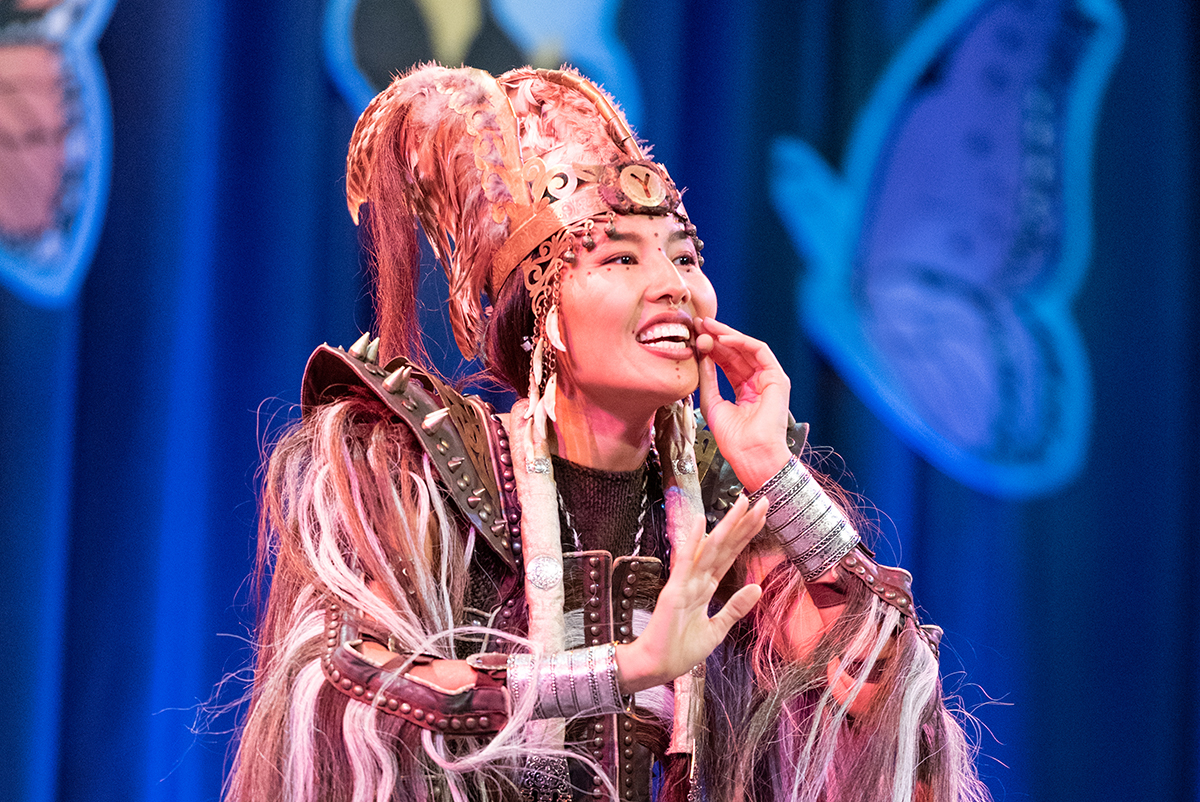 Bioneers’ Polina Smith interviewed the indescribable performer, Zarina Kopyrina (one half of the musical duet OLOX) to explore her roots in Siberia’s Yakutia region, steeped in an ancient and still vibrant shamanic culture, and her extraordinary life trajectory that has taken her and from a tiny village in one of the remotest and coldest places on the planet to playing her mind-bendingly original and hauntingly beautiful music around the globe.

Zarina Kopyrina, born in the Siberian tundra of the Sakha Republic (aka Yakutia) in a large family, was introduced to traditional folkloric music and local Indigenous shamanic cultural practices at a young age by her grandmother and others. After graduating from the University of Yakutsk in Economics, Zorina became very politically and culturally active and eventually began a musical career, traveling globally and becoming a widely sought-after performer, one who has created a unique combination of authentic Yakut traditional shamanic sounds deeply rooted in nature and modern, cutting-edge, electronic musical forms. Zarina is also passionately engaged with activism on behalf of the rights and lands of far northern Indigenous peoples.

She performs as half of the duet, OLOX with her partner, Andreas Veranyan-Urumidis. Olox, which seeks to bridge ancient wisdom and modern ways, has performed around the world, from Burning Man to Bioneers to the Lucidity Festival to the Kremlin to Iceland to the Arctic.

Polina Smith: Where were you born? Where are your roots?

Zarina Kopyrina: My heritage is in Arctic Siberia, in what is officially the Republic of Sakha of the Russian Federation (also known as Yakutia). I was born in a small village with 900 people in the middle of nowhere, in one of the most remote inhabited areas anywhere, but it’s a big region. If Yakutia was its own country, it would be one of the six biggest in the world. It’s also one of the coldest inhabited places in the world, but that winter makes us strong. We live in one of the most severe climates on earth, but I think we have some of the most beautiful spirits. We deeply respect the power of nature and believe that everything is alive. There are many reindeers, and beautiful Yakutian horses who are central to our lives, and you can often see the Aurora Borealis. And Sakha culture takes its breath from shamanism. The word shamanism was first used to describe our culture. It is one of the most ancient spiritual traditions in the world. Our shamans are healers of people and Nature.

And I have to say today we really need to heal nature. Like in many parts of the world, my people are facing big challenges: the permafrost is melting at enormous speed; there are more and more huge wildfires in Siberia; and mining by big corporations creates a lot of destruction and leaves large wounds all over the face of Mother Earth.

Polina: Did you always know that you would one day leave your village?

Zarina: I had a very happy childhood exploring the forest, but I always knew that there were lands beyond our forests. We had a TV, and my grandfather and I used to watch National Geographic movies about wildlife, which I loved. I had a sense that my inner voice was guiding me and that one day I would link my small world with the bigger world.

Polina: How did your career as an artist begin?

Zarina: My grandmother contributed a lot of time and care to me, teaching me traditional Yakut songs and singing techniques, and I started participating in ceremonies. In every village in my homeland there is a big solstice celebration, and then there’s a really huge one in which all the villages from a big, big region come together. Around 200,000 people come to that celebration. I would sing at the ceremonies and lead the circle dance and play different instruments. These are collective ceremonies to help people cleanse body, mind and soul and connect to the sacred with dances.

There are also a lot of beauty and talent contests at these celebrations in which you present traditions from your particular culture. One year I won one of these musical contests, and for some reason the prize was to go to Vienna to see the opera, in German. I’d never seen a big city! I was just so overwhelmed, but in a positive way! This is what my inner voice had been telling me! I can love my home, but there is also a bigger world that I can embrace. My whole consciousness was completely changed by that trip.

Polina: What is your perspective on the difficult times we are living in?

Zarina: The pandemic happened so quickly that we didn’t have a time to prepare. I think that many of us thought this was the kind of thing that only happened in sci-fi and fantasy movies, and we can spend a lot of energy trying to understand which theories about the disease are true and which are false, but then we might miss the main message, which is that the whole world is changing—mentally, spiritually and physically. A big shift is happening.

I am trying to focus on what I can do with myself and how I can be useful. The first thing that pops up for me is how I can feel more compassion and help other people to feel more compassion. The second is how I can still make my music during this time and have it be a positive force, so Andre and I built a home studio in our garage, and we are currently working on live-streaming and preparing workshops we can offer. The whole world is shifting to the online lifestyle and we are part of that during this time too. We have always offered our music as a form of healing. When we play we feel healing energy flow through us and we try to transfer it to people we perform for, and we still feel that healing energy can reach people through music online.

Polina: Do you have a sense of what your life’s mission is?

Zarina: One thing I would love to do is to build a spiritual center in America where people could learn about my culture and where ancestral Indigenous wisdom from around the world could be shared. I would also love to invite young people from my homeland to such a place, so they could learn English and techniques such as permaculture and sustainable energy systems, all of these beautiful solutions that our elders were using versions of long ago, but that have been forgotten in modern life. I would like young people to come and learn these things and then go back to their homelands and build beautiful, healthy, sustainable communities.

Polina: If you had a message to young artists right now, what would it be?

Zarina: Just pay attention to what your heart would really like to sing about, or dance or draw. Put some deep wisdom into it: don’t just make it about entertainment or showing off. Pay attention to what your heart wants to express. I believe that young people have a big mission and that they can lead a lot of people. They will be the fresh wind that changes the world. Put the message of the world you dream of into your art!

Zarina: We recently auditioned for America’s Got Talent (AGT) and have made it to the next round! You can see our performance here.

Some of our friends were surprised we went on that show because they consider it just pop music, but we enjoyed the experience. The AGT team love what they do, and they were very nice to us. I was surprised: they really wanted to get to know and understand us. So we feel very lucky to have that exposure. I think that this mass media, TV and the Internet, can be dangerous because it’s often used for brain washing, but if you have a clear vision, and you use it with a clean heart to share your gifts, it can be a great way to reach a lot of people.

Polina: I think in your case that’s definitely true, because I’ve seen you perform in several different settings, and I always felt that you showed up with total dignity and authenticity, no matter where or for whom you were playing, but how did you decide to audition for America’s Got Talent?

Zarina: I had wanted to be on there for 5 years. When I was in Moscow, I said to Andres, “we’re going to go to America and we’re going to be on a big, big show one day: it will happen!” It did take three attempts. It wasn’t easy to get on there. A few years ago we performed in front of the President of Russia, and we didn’t push it at all, but 3.5 million people watched the video of that performance. Then, this year another one of our videos got a million views, and I think that finally helped, so the third time we auditioned, we got called back. It’s not always easy or fast, but I feel the universe is helping us.

Polina: Thank you so much for speaking with us, Zarina. Good luck with AGT! And thank you for all your incredibly inspiring work!