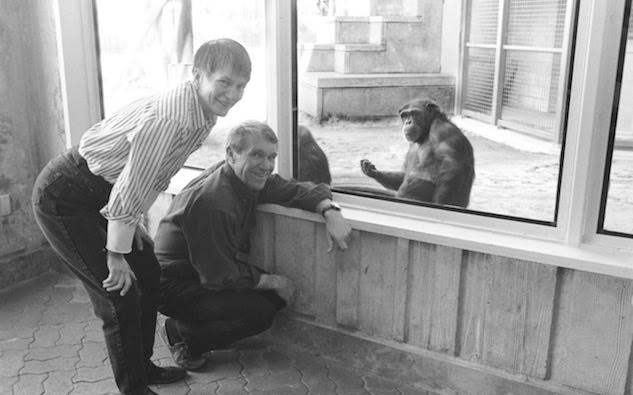 We’re thrilled to announce the launch of Bioneers Radio Series XVI! In all sincerity, it may be the best ever. Synchronously, 10 of the 13 programs have a strong racial justice theme, which was woven throughout the 2015 conference program. It has been a special joy to be completing the series just when we learned we won the Gold medal for one of last year’s shows — along with two other episodes honored as finalists — at the New York Festivals, the top global honor.

And the first show of the new series is very personal: It features the groundbreaking primatologist parents of our Executive Director Joshua Fouts! A don’t miss!

Our award-winning radio and podcast series features the bioneers — social and scientific innovators who are delivering breakthrough solutions to the most epic challenges facing people and our planet.

Find the show on your local radio station via our national station locator or tune in for free via iTunes, Stitcher, SoundCloud or wherever you get your podcasts. You can also download previous seasons of the programs.

We’re deeply gratified that Bioneers radio continues to offer some of the most electrifying and diverse programming available, free to you on any radio dial or digital device. Huge thanks to each of you who support these powerfully paradigm-shifting media.

Here’s what’s coming to feed your ears, starting this week:

We’re All Chimps: Or Are Animals Persons Too?
In Western civilization, human beings are considered the exceptional species and uniquely intelligent. Yet science is consistently revealing our intimate biological kinship with all species, especially the primates with whom we share 99% of our DNA. The breakthrough primatologist researchers Roger and Deborah Fouts (parents of Bioneers Executive Director Joshua Sheridan Fouts) take us on their amazing journey with chimpanzees that shows that, not only are people animals, but animals seem to be people, too.

Welcome the Water: Climate-Proofing for Resilience
In the face of global climate disruption, two billion people worldwide will be challenged by too much water, and nearly another two billion by not enough. When you fight nature, you lose, says Dutch water wizard and designer Henk Ovink. He’s dramatically demonstrating on large scales how to shift our relationship to nature and to culture – and climate-proof our cities and coasts.

Raced and Classed: The Journey From Diversity to Equity
What we do to each other, we do to the Earth. To protect our common home, we’re being called upon to bridge our differences to create beloved community and peaceful coexistence. A new generation of visionary change-makers is reframing the race conversation, and designing new tools to transform our unconscious biases and create justice. With: Racial justice pathfinders Rinku Sen, Saru Jarayaman, and Malkia Cyril.

Spirit in Action: Three Virtues for the 21st Century
When we allow our hearts to be broken open by hearing the stories of our fellow human beings, we build community and compassion. That is the passionate message of Sister Simone Campbell, one of the most renowned figures in contemporary faith-based progressive activism. She and the other rebel Nuns on the Bus are touring the country, bridging divides, transforming politics and keeping the faith.

Climate Health, Your Health: Prevention is Protection
Climate disruption is harmful to your health. Dr. Linda Rudolph and Dr. Barbara Sattler are showing how our success or failure as a civilization may well hinge on how ingenious, nimble and socially just our public health systems can become in restoring the ecosystem health on which all health depends. And doing the right thing is good for our health.

Cultural Mindshift: Full Spectrum Sustainability and Resilience
Climate is the trip wire for every other foundational ecological and biological system – as well as the basis for human civilization. As we face the long climate emergency, fortunately, skillful pathfinders are banding together to transform our ways of living and bring resilience from the ground up into widespread practice. With Berkeley’s Chief Resilience Officer, Timothy Burroughs, Professor David W. Orr, and financial adviser Tom Van Dyck.

Spirit in the Air: Reform, Revolution and Regeneration
In times of massive social change, personal biography can coincide with historical epochs to produce leaders who embody the spirit of the times. Lifelong activist, author, politician, and visionary Tom Hayden shares the long view of social change movements. He traces the arc of struggle that has led to this epic moment when the climate crisis and the crisis of inequality are colliding with global civilization – and survival is the mother of invention.

Restorative Justice: From Harm to Healing
Oakland, California, has had the reputation of being one of the most dangerous cities in the country. Then the Restorative Justice movement started boldly showing how quickly that reputation can be turned around by arresting the cycle of youth violence and incarceration early: in schools and juvenile justice policies. With: Restorative Justice leaders Fania Davis and Cameron Simmons.

Fire in the Belly: Women Leading Social Change
Harm to one is harm to all—and prevention is a question of human survival. From oil refinery accidents in California to the aftermath of the BP oil disaster in the Gulf South, leaders Pennie Opal Plant and Colette Pichon Battle are on the frontlines, organizing their communities to stop the harms of the extraction economy and climate disruption. Activist-attorney Adrianna Quintero is making sure the voices of those most affected are heard helping awaken the “sleeping giant” of Latino voters.

Nourishing the Future: Creating a Just and Healthy Food System for All
Communities around the country are working to create a new food future founded in health, justice and ecological wellbeing. Community activists Malik Kenyatta Yakini and Oran Hesterman are transforming Detroit through urban agriculture and helping low-income and working families access healthy food. Cathryn Couch works with young people to cook and deliver healthy meals to people who are ill and struggling to put food on the table with a model program using food as medicine.

Awakening the Genius in Everyone: When the Calling Keeps Calling
Renowned storyteller, performer, author, activist and scholar Michael Meade weaves threads of timeless wisdom traditions into myths for today’s global crisis. Meade says each of us is woven into the soul of the world, and we’re uniquely needed at this mythic moment to become active agents in the co-creation, re-creation and re-imagination of culture and nature.

Leading From the Feminine: Shifting Guidance From Head to Heart (One-hour Special)
What does it mean to bring the “feminine” forward in leadership from diverse cultural and ethnic perspectives? How might a spectrum of views help us to integrate relational intelligence into all our leadership? With poet Noris Binet; Nikki Silvestri, former Executive Director of Green for All and The People’s Grocery; Pat McCabe, or Woman Stands Shining, a Navajo teacher working on Indigenous nook, cranny and watershed across this planet is waking up frameworks for gender and all of life, and Nina Simons, co-founder of Bioneers and director of Bioneers Everywoman’s Leadership.