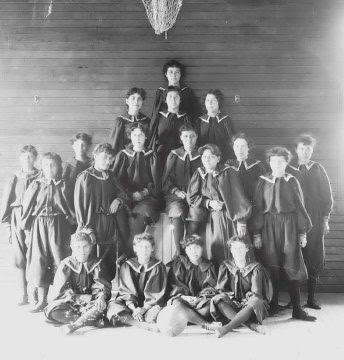 In recent years, I have been thrilled to witness more and more cities ban Columbus Day. To see how widespread this movement has become, check out this awesome interactive map created by the Zinn Education Project has made an. At Bioneers, we honor Indigenous Peoples Day. Our San Francisco Office is closed today, and many of us are thinking about those who have fought for Indigenous rights and a more inclusive America. Now, more than ever, it is critical that we bring our voices together to speak out against the parts of American society that condone and promote intolerance against North America’s First peoples.

It wasn’t that long ago that our relatives were forced into Indian Boarding Schools. Program Director, Cara Romero and I both grew up with grandmothers who were sent off to them as young girls, and our families have been personally affected by the trauma of this experience.

When my mother was born in Alaska, the territory exercised “Jim Crowe” policies against Native Alaskans. Just like the deep south, Natives were not permitted to ride in the front of the bus, sit in the front of the movie theater, or dine in white establishments.

So for me, growing up in a society that celebrates the genocidal foundation of the United States of America, has always been beyond hurtful. Columbus Day is essentially state-sanctioned bigotry. However, I also recognize that many Americans are not exposed to the truth through the public education system or mainstream media. That’s why we are committed to providing programming and educational materials to help the public to understand the truth in America.

For Indigenous Peoples Day, I’ll be thinking about some of my heroes in my adopted home of California, people like Sage LaPena (Northern Wintu), who is keeping traditional plant knowledge alive for the healing of all peoples; Chiitaanibah Johnson (Maidu/Diné) who spoke out against her racist history professor at Sacramento State University, and Valentin Lopez, Chairman of the Amah Mutsun Tribal Band, all of whom are speaking at the 2017 Annual Bioneers Conference.

Indigenous Peoples Day is a good day to get involved.

When we celebrate Columbus Day, we actively take part in a world that condones genocide. So to celebrate Indigenous Peoples Day, my plan is to get involved and to do something about the ongoing destruction of Indigenous homelands that was begun in 1492.

Chances are, right now there is something in your backyard that you can support. For me, it is protecting Juristaic, a holy place for the Amah Mutsun people, the descendants of the Central California California Indians who survived the Missions San Juan Bautista and Santa Cruz. I was surprised and shocked to learn a few months ago about the Sargeant Quarry “Project,” a proposed sand and gravel mine on 320 acres at Juristaic (four miles south of Gilroy, California, at a place now called Sargeant Ranch), a spiritually significant site for the Amah Mutsun tribal people from Central California (to understand the importance of Juristaic, tribal members describe it akin to Jerusalem for Jews, Christians and Muslims). In addition to irreparable harm to the tribe’s religious and spiritual integrity, the 30 years of proposed mining will cause significant adverse environmental impacts to the water, wildlife, plants, and other natural and cultural resources in the area forever. 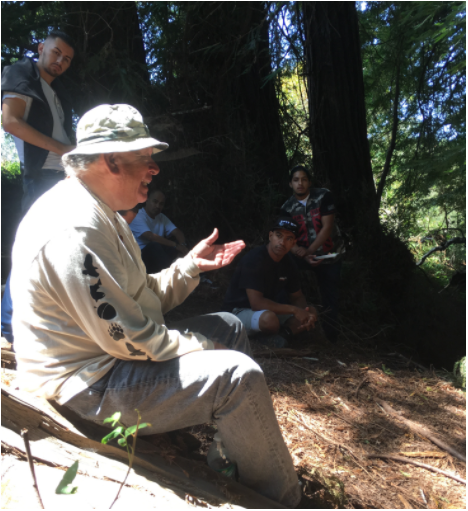 It was my honor and privilege to learn about the significance of village sites and traditional lifeways from Amah Mutsun Tribal Chairperson, Val Lopez, a few weeks ago. To witness the reclamation of traditional ecological knowledge alongside the restoration of these sites within the Amah Mutsun Land Trust, only strengthened my commitment to help protect this special place for generations to come.

I have only lived in Monterey, CA for seven years, but it is my responsibility to help protect this region for future generations. I felt even more connected to this resolve after I had the special opportunity to visit the Amah Mutsun Land Trust, a few miles north of Santa Cruz a few weeks ago, where I learned about the amazing collaborations between the Amah Mutsun Tribe, UC Santa Cruz and other institutions to reclaim the Indigenous knowledge of the very site where Europeans first encountered California’s central coast peoples.

The Sargeant Ranch Program is my region’s “Standing Rock” and it seems like nobody knows about it. So today, I’ll be drafting letters in opposition to the Sargeant Ranch project. You can learn more about the proposed mine threatening this sacred site here or here.

Other things you might do today, this week, or going forward might be to 1) learn about the Indigenous Peoples where you live; 2) get involved with environmental threats to the place you live (because odds are, if you are living in America, you live on occupied Indigenous territory); and, 3) connect with your ancestors. Learn where they came from, and the tides of history that displaced them.

At the annual Bioneers Conference coming up October 20-22, you will have many opportunities to learn about California Indian history, and how to get involved with several other Indigenous-led and other initiatives in California and around the world to take care of our planet. Check out this blog I wrote a few months ago about our amazing Indigenous Forum line up.