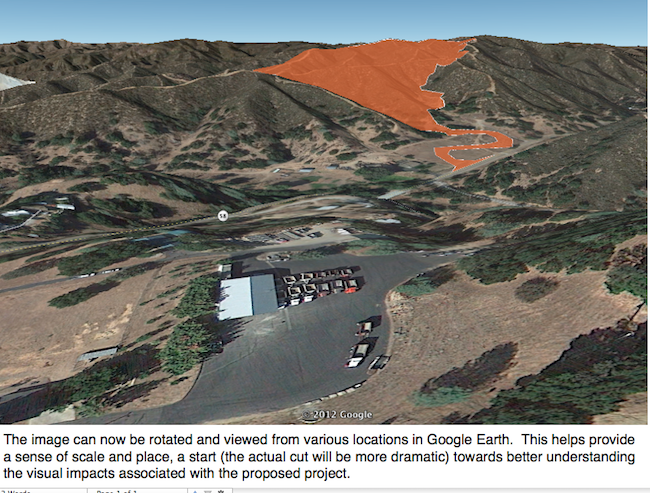 Bioneers was the stone in the slingshot in a recent David and Goliath scenario in San Luis Obispo County, home of Central Coast Bioneers.

Activists Charlie and Tamara Kleemann and their organization Margarita Proud were spearheading a community fight to stop approval of a mega sand and gravel quarry that was proposed along the Salinas River in the tiny town of Santa Margarita in rural San Luis Obispo County.  The quarry would have destroyed the local viewshed, annoyed neighbors with constant noise and explosions, and filled the small two-lane scenic Highway 58 with hundreds of trucks every day.  The project proponents were local heavyweights, who bullied and intimidated residents to stop any opposition to the project.

Charlie Kleemann was trying to find a way to demonstrate the physical impacts of the quarry in a way people could grasp.  The two-dimensional maps and drawings that had been submitted by the proponents did not really illustrate what the destruction of the mountain would look like from the ground.  When we visited the Kleemanns one evening in January 2013, Charlie showed us the small scale model of the project he was trying to build with wood.   We had shown Rebecca Moore’s talk at Bioneers in October 2012 about Google Earth Engine at our conference and were blown away by her success at using Google’s mapping and 3D overlay technology to defeat a huge logging project proposed near her home in the Santa Cruz Mountains.  I offered to loan Charlie the DVD of Rebecca’s presentation to perhaps give him another tool to use in his fight against the quarry.

A few days later, Tamara Kleemann called me to say Charlie stayed up for 24 hours straight after he watched the DVD teaching himself how to use the Google program.  Using the technology, he had been able to show what the maps and drawings had not – the actual impact of the proposed mining operation on the mountain itself.  Charlie was able to diagram the resulting views from each of his neighbors’ porches of what would happen if the quarry were approved.  He now had a potent weapon to use with County planning staff and at the public hearings. 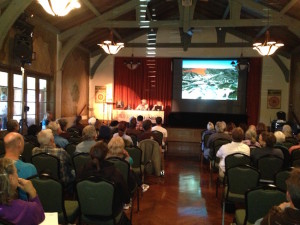 When we heard what Charlie was doing, we asked if he would speak at the 2013 Central Coast Bioneers Conference and we invited Rebecca Moore to come and co-present with him.   They both agreed, and their presentation was one of the most well-attended and well-received local talks given that year.   The Kleemanns and Margarita Proud were able to defeat the quarry project at the Planning Commission level.  The project proponents appealed the decision to the Board of Supervisors, and again, the community came out in droves to voice their opposition.  The appeal was denied.

We are eternally grateful to Bioneers and Rebecca Moore for bringing this valuable technology to our attention so that we could pass the information on to local residents who put it to good use in a real-life battle to save a small town.  Rebecca took a personal interest in the outcome, and has since invited Charlie to attend Google’s Geo for Good workshop in the fall of 2015 so that he can hone his new-found skills.

Ecologistics, Inc. has been a member of the Bioneers Network since 2010 and puts on the annual Central Coast Bioneers Conference.  As a result of networking that occurs at the conference, we have had a number of important outcomes resulting from our engagement, including:

A future project includes the creation of a network of Community Cafés, where the food insecure would be able to get a meal on a sliding scale any day of the week.  Ecologistics also acts as the fiscal sponsor for several local nonprofits including:

Through the work of these dedicated organizations, we can broaden our positive impact on the County.  Ecologistics looks forward to future collaboration with Bioneers to extend its work throughout the country and the world.