Community Building Is a Noun and a Verb 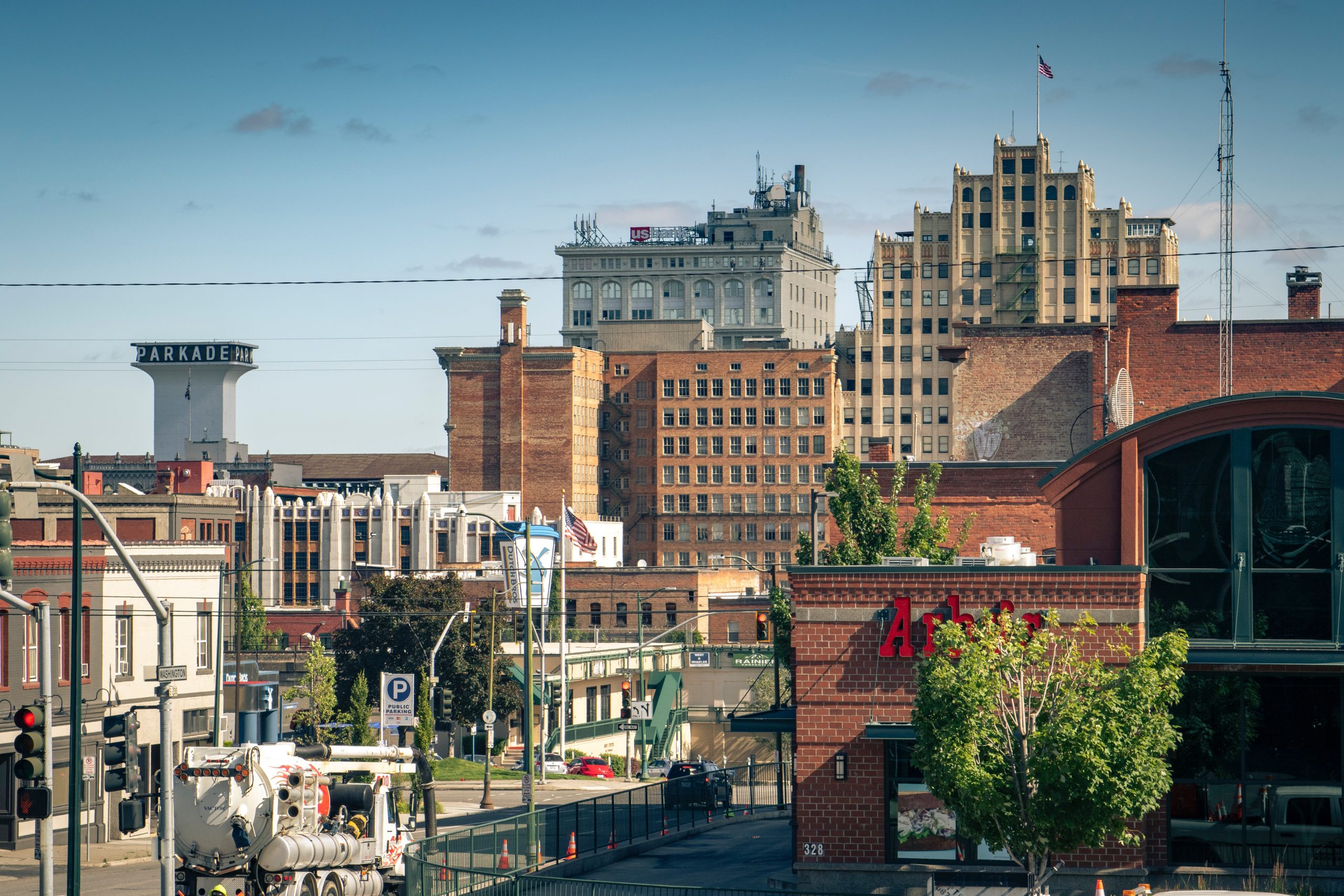 After working as a public defender for more than 20 years, Jim Sheehan received an unexpected inheritance from a family member. Jim purchased and renovated six buildings in a run down corner of downtown Spokane, Washington and repurposed them for the collective good. For more than 20 years these buildings, now known as the Community Building Campus, have served as a community hub for grassroots campaigns, coalitions, and activists. In the new book, One Block Revolution: 20 Years of Community Building, leaders who have worked from this hub share their stories that highlight the legacy of this collective.

In this excerpt from the introduction by the editor of the book, author and social impact advisor with Measure Meant, Summer Hess recounts her work with Jim beginning as an executive assistant and how it catalyzed her work to build a sustainable future.

Soon after starting my job in 2013 as executive assistant to Jim Sheehan, founder of the Center for Justice and the Community Building Campus in Spokane, Washington, I returned to our office after lunch to a voice message from a Coca-Cola representative. He was calling about an old advertisement painted directly on the southwest corner of the Community Building and offered to have it restored, free of charge.

It seemed like a great idea to me. I was a newly minted MFA in nonfiction writing who felt a strong connection to the Spokane region and Eastern Washington University, where I had earned my degree. I felt the faded advertisements on early 20th-century brick evoked nostalgia for the early days of the Inland Empire. They spoke to a classic Spokane era, when industry boomed, when timber and minerals were trucked out by train and money flowed in, when buildings were so finely crafted each of them had a name. They also brightened and textured a city still creeping back from the shift out of downtown and into the suburbs. These advertisements, along with Art Deco flourishes on historic theaters and wide avenues planned during a period of abundance, made it easier to look past street-level parking garages and sparsely populated storefronts.

Like many mid-sized American cities, Spokane is also experiencing a reversal of this trend. Businesses are repopulating downtown, and people like me—born and raised thousands of miles away—are moving to the region for its high quality of life and education. If rapidly increasing property values are any indication, the city is changing quickly—at a slower pace than some residents would like, but at a rate that seems too sudden for others. As the density in downtown increases, Spokane has become more politically diverse. The Northwest Progressive Institute reports that the Clinton-Kaine ticket won the City of Spokane by eleven points in 2016, while Trump-Pence won Spokane County by nine. In 2020, Biden-Harris carried the city by seventeen points, while the county went Trump-Pence by four. Although this was an unusual election year, Spokane is representative of the national urban-rural divide, where higher population densities are shifting cities to be more progressive than their surroundings. The Community Building Campus (CBC) has served as the nerve center for planning, organizing, campaigning for, and accelerating this kind of progressive social change in the Spokane region.

But in 2013 I wasn’t tuned into the political landscape of Spokane; I was just excited to share a mural restoration project with my boss. I had been hired part-time as his executive assistant, and all that I knew about my job was that I was supposed to answer his mail and manage his calendar, which took about two hours a week. I knew that his previous assistant had helped him with unique and seemingly unrelated projects, from staging a theatrical reading of Love Letters with his life partner, Mary, to serving as non-voting secretary for the Center for Justice board, to organizing an annual pop-up soccer camp for kids at a nearby park. I had no experience in theater, but I could participate in this small piece of historic preservation. Jim and his team had gutted and, wherever possible, restored six buildings on the same block of Main Avenue, and I perceived them as testaments to his commitment to historic architecture. Surely, he would be excited about the mural project, too.

Jim returned to his office after enjoying a cup of soup from the Saranac Pub on the first floor of the building next door, said hello, and sat behind the credenza for his afternoon scroll through The Huffington Post.

“I had an interesting voicemail come through,” I said from my desk that peered out over Main Avenue, watching the lunch rush at the Main Market Co-op and Boots Bakery.

“Oh?” he asked, without looking up. He was dressed in his usual sweatshirt and track pants, which he had worn to a personal training session earlier that day. I told him about the Coca-Cola rep and his offer.

Still scrolling, his immediate response was, “Tell them they can restore the advertisement when they stop using love and happiness to sell a f—ing product.”

His tone was not angry, but it was clear. So was the fact that I was not working for your average developer or philanthropist. This guy saw a lot more at stake in the world than his profit margins or the public visibility of his family’s foundation. Even in something as benign as peeling paint, he saw the manipulative clutches of capitalism clashing with a higher good. I realized how complex my position as an executive assistant was going to be. Should I deliver his opinion verbatim? Should I spare the rep who was obviously a cog in the structure of a global corporation? Should I temper the language and communicate the message?

In that particular moment, I took no action. Telling the Coca-Cola rep about Jim’s stance on capitalism did not seem necessary. It was around that time I printed off the Community Building’s mission statement and taped it to my computer: “To host, inspire, and catalyze social change in the Spokane region.” I had no idea how an executive assistant could be an agent for change, but I kept the mantra in mind as I sorted out my place among the staff who managed the buildings that hosted more than forty nonprofits, small businesses, and state politicians. I did not know what my role was yet, but I knew the CBC was a place I wanted to be.

This was the most dynamic block in the city, and not just for social enterprises and nonprofits. Several other committed business owners operated eateries and unique shops. There was a constant refresh of energy on the block as students flowed in and out of bars and cafés, and activists trotted back and forth from public meetings or one-on-one brainstorming sessions. The CBC also included a two-screen independent movie theater, an art gallery, a food co-op, and a large multi-vendor space called the Saranac Commons. People who knew nothing of social justice movements happening above the ground floor came to eat, drink, and participate in diverse aspects of public life together.

Over time, I began to experience what Jim and the people he worked with were after. I learned that, as a career public defender, Jim understood how inequality threatens the livelihoods—and at times, the lives—of people in our communities, but there was little he could do from within the system to effect change. Then his aunt left him an unexpected windfall inheritance, giving him the chance to make the difference he had always dreamed of. That’s when he began to buy, restore, and repurpose historic buildings on Main Avenue as living, sustainable monuments to social justice. He invited local citizens and community leaders to leverage his personal wealth as a collective resource and

invested in the conditions for social innovation. Most importantly, I believe, he took advantage of a rare opportunity to stop treading water in the current system and to start asking, what’s possible?

Eight years after the Coca-Cola incident, and after several evolutions of my role and responsibilities, I am still the messenger, attempting to name and outline what can happen when resources and space are dedicated not just to a specific project, but a higher purpose. In the process of curating and editing this anthology, I find myself working anew toward that mission I had taped to my computer: to host, inspire, and catalyze social change, this time through the voices and stories of people who built and shaped this vision.