Considering Clothing from Soil to Soil 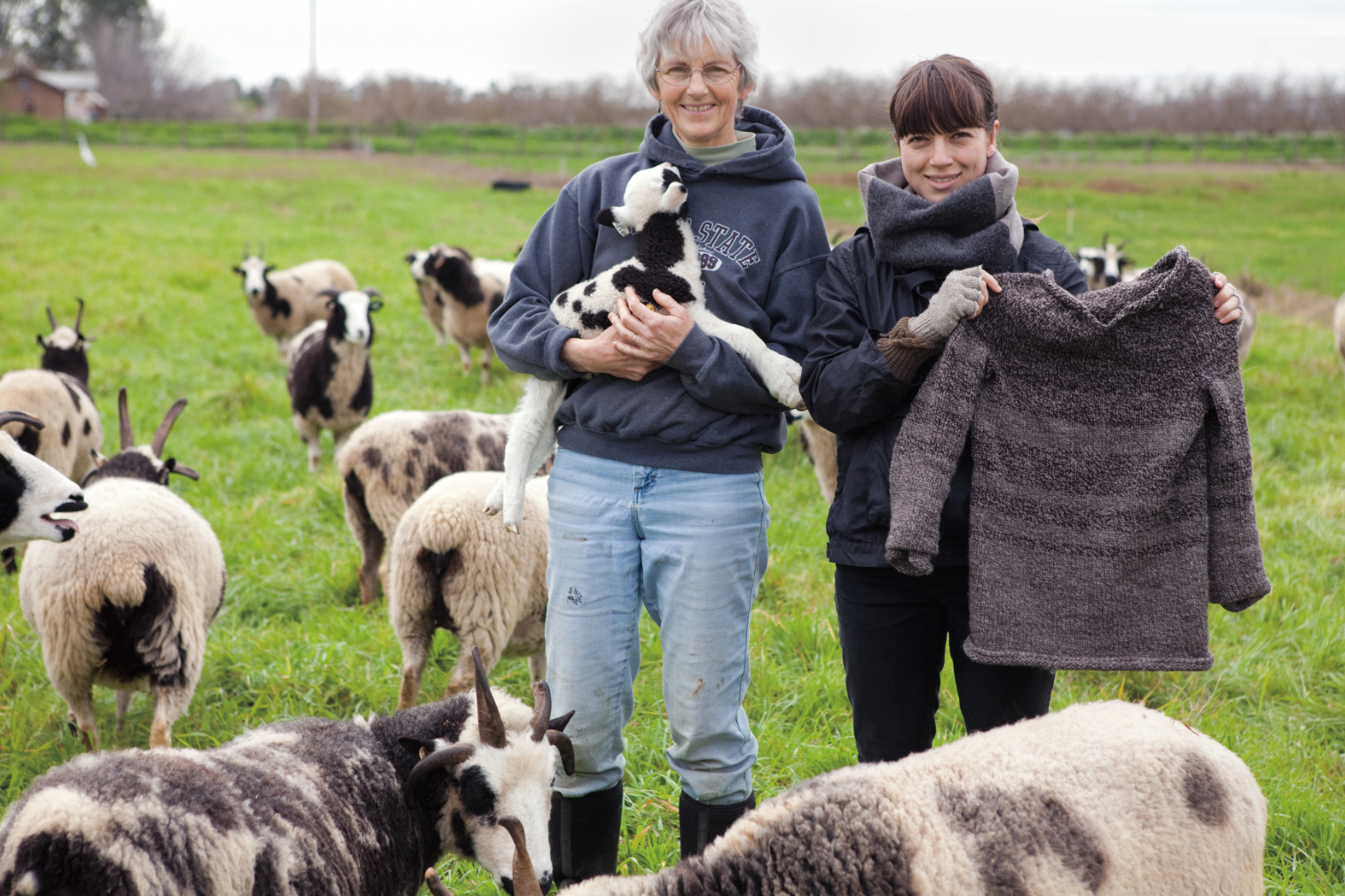 The following excerpt is from weaver and natural dyer Rebecca Burgess’ new book, Fibershed: Growing a Movement of Farmers, Fashion Activists, and Makers for a New Textile Economy (Chelsea Green Publishing, November 2019) and is reprinted with permission from the publisher.

When we consider our clothing choices, we often make decisions based on color, size, and style, not on the carbon pool from which a piece of clothing originates. But the ultimate source of your clothes makes a huge difference. We should be considering clothing in the context of the following questions: Are we wearing clothing from the fossil carbon pool or are we wearing clothing grown in the soil? Are our clothes designed to return to the carbon pool from which they came? Can we compost our clothes and return them to the soil? Does our clothing degrade into smaller and smaller synthetic fossil carbon fibers (plastic) and create microfiber pollution in our oceans, soils, and landfills? How can our clothing choices help us move atmospheric carbon into the soil? Then we must discontinue our part in the production of carbon dioxide emissions by divesting heavily from fossil carbon sources of clothing: virgin acrylic, nylon, and polyester, as well as synthetic dyes and synthetic finishing agents. Once we regain our focus on natural fiber systems—materials that are farmed, ranched, and in some rare cases wild-harvested—the opportunity to restore carbon to our soils becomes a reality.

The next step is to restore and maintain healthy soils on our farms and ranches. Again, how we grow organic food is a good comparison. The same factors that make the soil productive for organic food—abundant microbial life, proper nutrient cycling, vigorous plants, holistically managed livestock, and resilient watersheds—also produce durable and self-renewing fiber for our clothes. Plant and animal fibers have historically been grown without pesticides, insecticides, or fossil fuels, and instead with natural processes that mimic natural ecology. The Soil-to-Soil system is the same whether a farmer is producing organic lettuce or organic cotton, and consumers should be just as demanding when considering the source of their clothing as they are about the source of their salads. This natural affinity between food and clothing, as well as their corresponding markets and social movements, is a critical element in the fibershed model.

Since the start of the Industrial Revolution, scientists estimate that we’ve lost 136 gigatons (136 billion metric tons) of carbon from our soils globally, and the excess carbon dioxide in our atmosphere from soil degradation and fossil carbon burning is trapping the sun’s long-wave radiation and heating our planet at a pace unprecedented in geologic history. Making matters worse, our industrial fiber and food systems are net emitters of greenhouse gases, contributing approximately 50 percent of annual global emissions. [1] Nearly every aspect of the production and distribution of food and fiber in industrialized nations, not to mention the waste they generate, carries a large carbon footprint, including the fossil fuels required to power machinery and transportation, as well as the synthetic chemicals used as fertilizer and herbicides to keep yields up.

However, as dire as it sounds, this situation can be turned around. Soil-to-Soil systems are designed so that agriculture and its supply chains can move from being net emitters of greenhouse gases to net reducers. In other words, by employing region-appropriate carbon farming practices, food and fiber systems can help build up the soil carbon pool over time and thus become part of the solution to climate change. [2] This turnaround in food and fiber systems is good for farmers and ranchers as well, because global warming is creating increasingly frequent and unpredictable weather extremes, making it more difficult to farm and ranch across a wide variety of landscapes. We are seeing an increase in soil moisture loss due to evaporation and an increasing rate of soil erosion due to severe weather events, from floods to droughts. The overall heating of our planet is also contributing to carbon losses in our soils. [3] Altogether, these outcomes of climate change are leading to wide- spread soil degradation. There is a great need to create resiliency strategies that can support farmers and ranchers in growing and producing our fiber and food regeneratively.

Building soil organic matter has an important additional benefit: It increases the soil’s water-holding capacity, thus reducing agriculture’s need to draw from aquifers and surface water sources. This means water can be conserved for other uses, including the survival of imperiled species, lessening the tension between biological diversity and human-managed systems. From an economic perspective, improving the soil’s ability to capture and retain water can be done naturally and relatively inexpensively while increasing yields and net primary productivity on working lands. This equates to increased fiber and food security and less land required to meet our essential needs. Focusing on the ground beneath our feet is a place-based strategy that every community can engage in without the need for complex technologies that come with hidden costs.

An illustration of the many benefits that accrue when soil organic matter is increased comes from research conducted by the Silver Lab at the University of California–Berkeley. In 2008 a single half-inch layer of compost produced from green waste and animal manure was applied to two different types of grazed rangelands in Northern California to see whether there would be any increases in forage production, soil carbon, and soil water-holding capacity and whether these increases could be sustained over a period of time. Initial results were very promising. After three years data showed that forage production increased by 40 and 70 percent, respectively, on the two sites; water-holding capacity of the soils increased by nearly 25 percent, while soil carbon increased by about 0.4 metric ton (the equivalent of 1.49 metric tons of CO2) per acre per year. Significantly, these increases have persisted across ten years of data collection, and ecosystem modeling by the scientists at the Silver Lab suggests that these improvements will continue well into the future—all in response to a single application of compost. [4] The research provided an important starting point for proving, through peer-reviewed science, what the ecosystems response to adding energy (carbon) into the system could do to regenerate that system while having a positive climate impact. This body of research enabled changes in policy at the state level.

There are many methods for increasing soil organic matter (which is roughly 58 percent carbon), of which compost is just one. Integrated crop-and-livestock systems, windbreaks, hedgerows, silvopastures, and riparian corridor restoration are a few noteworthy practices that are commonly implemented in our region. These methods are most effective when stacked and combined into a farm or ranch setting. Regardless of the methods a land manager chooses for their particular place, the Soil- to-Soil system provides organizing principles that are key to regenerating soil, food, and fiber.

Rebecca Burgess, M.ed, is the executive director of Fibershed, chair of the board for Carbon Cycle Institute, and the author of Harvesting Color. Her newest book is Fibershed: Growing a Movement of Farmers, Fashion Activists, and Makers for a New Textile Economy (Chelsea Green Publishing, November 2019). Find out more at www.fibershed.com.