Discovering Shared Vision with the Goi Peace Foundation in Japan 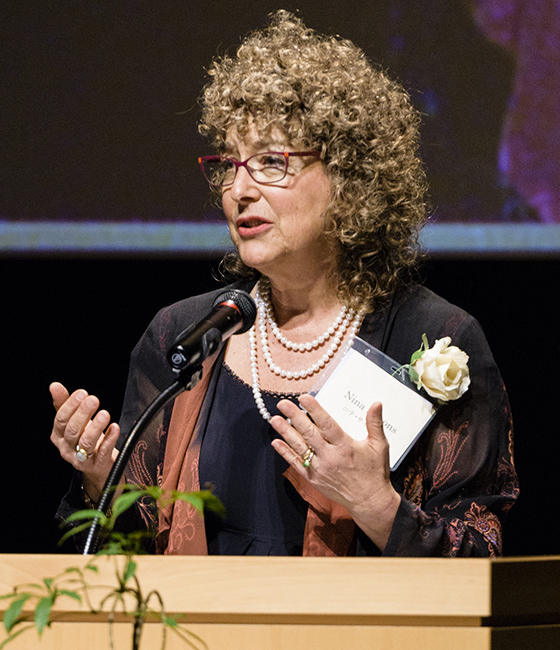 Kenny and I recently accepted the Goi Peace Award in Tokyo for Bioneers’ “pioneering work to promote nature-inspired innovations for restoring the Earth and our human community.”

It was an enormous honor, as past recipients have included Mikhail Gorbachev, James Lovelock, Hafsat Abiola-Costello, Lynn Twist and Bill Strickland, (among others). We felt we received the award on behalf of you – the extensive community of diverse change-makers whose leadership we’ve served over these past 27 years.

After a much-needed day of rest after arriving, we were treated by the Saionjis to an extraordinary (Thanksgiving, for us) feast, of about 15 traditional courses, exquisitely prepared and dazzlingly presented. We got to know each other over a three-hour meal that was deeply engaging and inspiring, and we realized how closely our organizational goals and visions are aligned.

Like Bioneers, the Goi Peace Foundation seeks to heal our relations through finding our way toward peace and reciprocal, reverent relationships – within ourselves, among each other and with the Earth.

An exhilarating highlight for me was our luncheon with the circle who’ve collectively created a project called Soul of WoMen. An outgrowth of their Fuji Declaration, which we are now signatories to, Masami Saionji (who is an innovator and visionary in leadership of the Goi Foundation, in partnership with her husband Hiroo) brought together a group of eighteen accomplished and powerful women leaders from all walks of life to consider what they might see together as remedies for root causes of violence and destruction in the world.

Together, they created a declaration, which advocates for the return of feminine values into balance with the masculine within ourselves, our institutions and governance, to achieve balance in our human ecosystem. As they put it, they seek “to transform the love of power toward the power of love.” I was so thankful I’d spoken of my passion for women’s leadership in my acceptance speech.

Ursula Le Guin, one of my favorite author/futurists, wrote recently about the imbalance of the yin and yang in our world, echoing the Soul of WoMen’s proclamation.

As you might imagine, for me this was like finding sisters-in-vision from halfway ‘round the globe. Though our time together was brief, seeds were planted, I believe for some form of future collaboration, and we were inspired to discover how deeply aligned our visions are. In this time of so much emphasis on women in leadership, there is so much emphasis on behavior and quotas, withouy nearly as much awareness of the internalized beliefs and biases that I believe create the foundation for our existing imbalances.

So many women are leading as they’ve seen modeled, from their masculine sides, and so many institutions and policies are imbalanced in their perspectives and orientations.

Relatively few efforts seem to be focused upon the interior conditioning, or archetypal values, which guide our choices and behavior.

While there has been extensive research proving that as the equity, leadership and inclusion of women’s voices in decision-making improves, so too does the health, profitability and security of companies, communities and nations, there has been relatively little attention paid to the underlying human psychological biases that I believe help to inform, perpetuate and reify the imbalances we face.

It helped me to understand our societal emphasis on the externalities when I learned that Carl Jung, a founder of modern psychology, attributed the interior of our psyches to the anima, or feminine within us all, and the outer to the animus, or masculine.

For me, this has been a priority focus since I felt called to explore a gender-related inquiry into leadership in the mid-90s, and began programming about it within Bioneers. Without addressing the inner changes that are needed, I believe, our progress toward gender equity and peace will continue to be far slower than is needed to help shift our course. It was so exciting, therefore, to discover these women of a similar mindset coming from Japan!

At the award ceremony, which had a theme of …other honorees included the two young winners of their International Essay Contest for Young People, which was synchronistically themed Learning From Nature. The first prize winners were a 12-year old from Bosnia and Herzegovina whose essay spoke to what we have to learn from wolves, and a 22-year old woman from India whose transformational experience healing from depression with help from a Mulberry tree has translated into her activism in support of others grappling with depression and trauma.

Following our acceptance speeches, there was what they called a “Talk Session” which included a slide show and talk by a Japanese journalist and activist, Nao Suzuki, who’d attended Bioneers annual conference for three years, previously. When asked what he had been inspired to do upon returning to Japan after Bioneers, Nao replied that he’s

As we interviewed with Nao before leaving Tokyo, he told us that his transformative revelation had been when he realized he was so busy creating change in his home community that he’d been neglecting his wife, his home and his inner life. He calls it the “donut syndrome,” and noted that his emphasis on the external to the detriment and malnourishment of his heart, hearth and home was what he realized had to change, to rebalance his life for personal sustainability. He said that when he shares that story in Japan, it resonates deeply. I imagine it might prove to be useful medicine or guidance for some in this country, too.