Divided: In the Body of the World 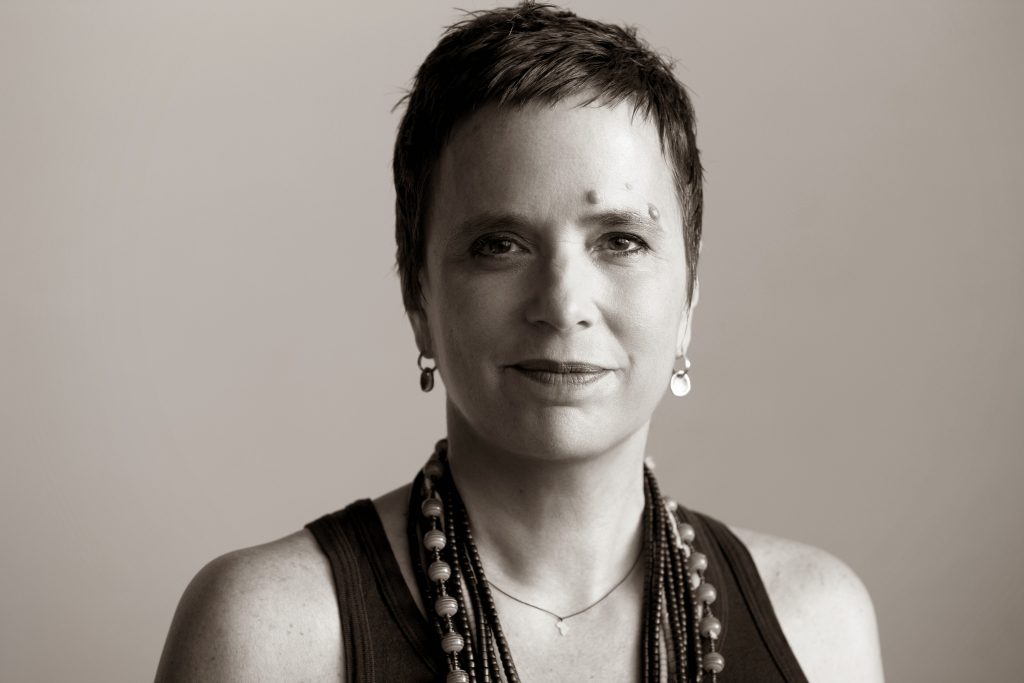 Eve Ensler—best known for her award-winning play The Vagina Monologues—is an activist and vocal advocate for widespread education about violence toward women. As founder of the movement V-Day, her advocacy has spurred thousands of events and raised upwards of $100 million to build campaigns and programs centered around anti-violence. The author of an impressive collection of plays and other media, Ensler continually returns to concepts of womanhood, women’s rights and female embodiment. In 2016, she performed a moving monologue at the Bioneers Conference called Coconut.

In the Body of the World (Picador, 2014) is a memoir in which Ensler recounts her experience as a cancer patient, becoming a body, an experiment, and a scene of destruction. The following is an excerpt from the book’s first chapter.

A mother’s body against a child’s body makes a place. It says you are here. Without this body against your body there is no place. I envy people who miss their mother. Or miss a place or know something called home. The absence of a body against my body created a gap, a hole, a hunger. This hunger determined my life.

I have been exiled from my body. I was ejected at a very young age and I got lost. I did not have a baby. I have been afraid of trees. I have felt the Earth as my enemy. I did not live in the forests. I lived in the concrete city where I could not see the sky or sunset or stars. I moved at the pace of engines and it was faster than my own breath. I became a stranger to myself and to the rhythms of the Earth. I aggrandized my alien identity and wore black and felt superior. My body was a burden. I saw it as something that unfortunately had to be maintained. I had little patience for its needs.

The absence of a body against my body made attachment abstract. Made my own body dislocated and unable to rest or settle. A body pressed against your body is the beginning of nest. I grew up not in a home but in a kind of free fall of anger and violence that led to a life of constant movement, of leaving and falling. It is why at one point I couldn’t stop drinking and fucking. Why I needed people to touch me all the time. It had less to do with sex than location. When you press against me, or put yourself inside me. When you hold me down or lift me up, when you lie on top of me and I can feel your weight, I exist. I am here.

For years I have been trying to find my way back to my body, and to the Earth. I guess you could say it has been a preoccupation. Although I have felt pleasure in both the Earth and my body, it has been more as a visitor than as an inhabitant. I have tried various routes to get back. Promiscuity, anorexia, performance art. I have spent time by the Adriatic and in the green Vermont mountains, but always I have felt estranged, just as I was estranged from my own mother. I was in awe of her beauty but could not find my way in. Her breasts were not the breasts that fed me. Everyone admired my mother in her tight tops and leggings, with her hair in a French twist, as she drove through our small rich town in her yellow convertible. One gawked at my mother. One desired my mother. And so I gawked and desired the Earth and my mother, and I despised my own body, which was not her body. My body that I had been forced to evacuate when my father invaded and then violated me. And so I lived as a breathless, rapacious machine programmed for striving and accomplishment. Because I did not, could not, inhabit my body or the Earth, I could not feel or know their pain. I could not intuit their unwillingness or refusals, and I most certainly never knew the boundaries of enough. I was driven. I called it working hard, being busy, on top of it, making things happen. But in fact, I could not stop. Stopping would mean experiencing separation, loss, tumbling into a suicidal dislocation.

As I had no reference point for my body, I began to ask other women about their bodies, in particular their vaginas (as I sensed vaginas were important). This led me to writing The Vagina Monologues, which then led me to talking incessantly and obsessively about vaginas. I did this in front of many strangers. As a result of me talking so much about vaginas, women started telling me stories about their bodies. I crisscrossed the Earth in planes, trains, and jeeps. I was hungry for the stories of other women who had experienced violence and suffering. These women and girls had also become exiled from their bodies and they, too, were desperate for a way home. I went to over sixty countries. I heard about women being molested in their beds, flogged in their burqas, acid-burned in their kitchens, left for dead in parking lots. I went to Jalalabad, Sarajevo, Alabama, Port-au-Prince, Peshawar, Pristina. I spent time in refugee camps, in burned-out buildings and backyards, in dark rooms where women whispered their stories by flashlight. Women showed me their ankle lashes and melted faces, the scars on their bodies from knives and burning cigarettes. Some could no longer walk or have sex. Some became quiet and disappeared. Others became driven machines like me.

Then I went somewhere else. I went outside what I thought I knew. I went to the Congo and I heard stories that shattered all the other stories. In 2007 I landed in Bukavu, Democratic Republic of Congo. I heard stories that got inside my body. I heard about a little girl who couldn’t stop peeing on herself because huge men had shoved themselves inside her. I heard about an eighty-year-old woman whose legs were broken and torn out of their sockets when the soldiers pulled them over her head and raped her. There were thousands of these stories. The stories saturated my cells and nerves. I stopped sleeping. All the stories began to bleed together. The raping of the Earth. The pillaging of minerals. The destruction of vaginas. They were not separate from each other or from me.

In the Congo there has been a war raging for almost thirteen years. Nearly eight million people have died and hundreds of thousands of women have been raped and tortured. It is an economic war fought over minerals that belong to the Congolese but are pillaged by the world. There are local and foreign militias from Rwanda, Burundi, and Uganda. They enter villages and they murder. They rape wives in front of their husbands. They force the husbands and sons to rape their daughters and sisters. They shame and destroy families and take over the villages and the mines. The minerals are abundant in the Congo—tin, copper, gold, and coltain, which are used in our iPhones and PlayStations and computers.

Of course by the time I got to the Congo, I had witnessed the epidemic of violence toward women that scoured the planet, but the Congo was where I witnessed the end of the body, the end of humanity, the end of the world. Femicide, the systematic rape, torture, and destruction of women and girls, was being employed as a military/corporate tactic to secure minerals. Thousands and thousands of women were not only exiled from their bodies, but their bodies and the functions and futures of their bodies were rendered obsolete: wombs and vaginas permanently destroyed.

The Congo and the individual horror stories of her women consumed me. Here I began to see the future— a monstrous vision of global disassociation and greed that not only allowed but encouraged the eradication of the female species in pursuit of minerals and wealth. But I found something else here as well. Inside these stories of unspeakable violence, inside the women of the Congo, was a determination and a life force I had never witnessed. There was grace and gratitude, fierceness and readiness. Inside this world of atrocities and horror was a red-hot energy on the verge of being born. The women had hunger and dreams, demands and a vision. They conceived of a place, a concept, called City of Joy. It would be their sanctuary. It would be a place of safety, of healing, of gathering strength, of coming together, of releasing their pain and trauma. A place where they would declare their joy and power. A place where they would rise as leaders. I, along with my team and the board at V-Day, were committed to finding the resources and energy to help them build it. We would work with UNICEF to do the construction and then, after V-Day, would find the way to support it. The process of building was arduous and seemingly impossible—delayed by rain and lack of roads and electricity, corrupt building managers, poor oversight by UNICEF, and rising prices. We were scheduled to open in May, but on March 17, 2010, they discovered a huge tumor in my uterus.

Cancer threw me through the window of my disassociation into the center of my body’s crisis. The Congo threw me deep into the crisis of the world, and these two experiences merged as I faced the disease and what I felt was the beginning of the end.

Cancer was an alchemist, an agent of change. Don’t get me wrong. I am no apologist for cancer. I am fully aware of the agony of this disease. I appreciate every medical advance that has enabled me to be alive right now. I wake up every day and run my hand over my torso-length scar and am in awe that I had doctors and surgeons who were able to remove the disease from my body. I am humbled that I got to live where there are CAT scan machines and chemotherapy and that I had the money to pay for them through insurance. Absolutely none of these things are givens for most people in the world. I am particularly grateful for the women of the Congo whose strength, beauty, and joy in the midst of horror insisted I rise above my self-pity. I know their ongoing prayers also saved my life. I am in awe that it happens to be 2012, not twenty years ago even. I am gratefully aware that at just about any other point in history I would have been dead at fifty- seven.

In his book, The Emperor of All Maladies, Siddhartha Mukherjee says, “Science is often described as an interactive and cumulative process, a puzzle solved piece by piece with each piece contributing a few hazy pixels to a much larger picture.” Science, then, is not unlike a CAT scan, a three-dimensional magnetic electronic beam that captures images as it rotates around the body. Each image is separate but somehow the machine makes them seem like one.

This book is like a CAT scan—a roving examination—capturing images, experiences, ideas, and memories, all of which began in my body. Scanning is somehow the only way I could tell this story. Being cut open, catheterized, chemofied, drugged, pricked, punctured, probed, and ported made a traditional narrative impossible. Once you are diagnosed with cancer, time changes. It both speeds up insanely and stops altogether. It all happened fast. Seven months. Impressions. Scenes. Light beams. Scans.

This excerpt has been reprinted with permission from In the Body of the World by Eve Ensler, published by Picador, 2014.