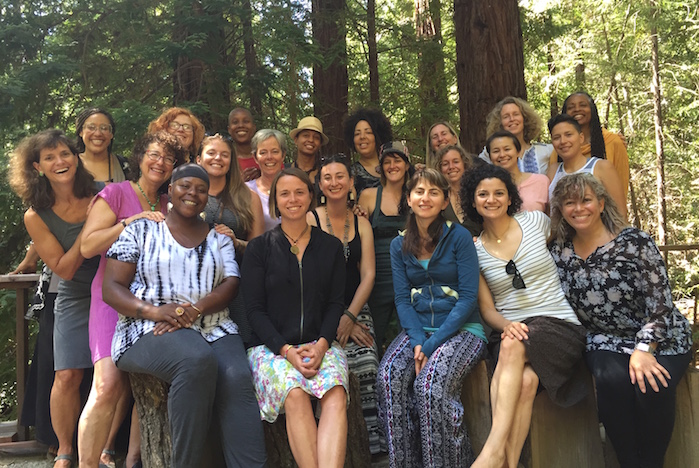 Over the past year, the Bioneers Everywoman’s Leadership program has continued to expand its reach—from a surprise hit panel at the UN to three new Media Collections—while still continuing deep connection and network building through our Cultivating Women’s Leadership intensives.

Read on for more details and how you can be a part of our work in the coming year.

UN Commission on the Status of Women

In mid-March, I attended the UN Commission on the Status of Women (CSW), and was invited to host a panel session sponsored by an interfaith justice NGO led by radical and inspired women.

This year, our panel topic was Women, Democracy, Health and Extractive Industries. They invited a longtime friend and past Bioneers presenter, marine biologist and democracy activist, Riki Ott, and others. A fisherwoman in Alaska, Riki was politicized into action by the Exxon Valdez oil spill and witnessing its long-term effects on that region. Now, she travels to educate communities about the toxic health impacts of spills, and about how to organize locally for democracy.

As I prepared for the panel during the nights preceding it, I was stunned by the scope of global data I found. Everywhere on the planet, it seemed, extractive industries (corporations drilling or mining for oil, coal or minerals) were assaulting women at the front lines of their communities, most often rural and Indigenous. I learned that companies move in “man-camps,” which precipitate heightened rates of sex trafficking, domestic abuse, rape and sexual violence, while also increasing drug and alcohol addiction among the men of those communities.

Although I’d known of this pattern permeating North America, I’d had no prior understanding of the global nature of the impacts on women and how closely it parallels the assault and commodification of the Earth.

At the UN, our session attracted nearly 150 people, about twice as many as any prior session. After framing the issue, we invited comments, testimonials and questions, and heard from women from Goa, France, Africa and Portugal about the health, environmental and social crises women were experiencing caused by the same threats.

The audience responded with passionate enthusiasm to Riki’s teachings on democracy and my correlation between this corporate assault on women and the rape of our Mother, the Earth, which threatens the very fertility of life itself.

This year, I’m feeling like an expectant mom with the birth of three Media Collections featuring diverse and inspiring women leading change that are ready to be released:

These new Collections complement last year’s release of Everywoman’s Leadership, Volume 1, which is available as a digital download and as a beautifully packaged CD/DVD set.

The three new titles, also enhanced by great art, will be available as digital editions to stream for free and to download in a pay-what-you-wish model that gives you a stake in the Bioneers vision of spreading ideas that can change the world.

Two of the new Media Collections are selections of videos and audio that feature an array of women whose modeling of leadership will be accessible to women and girls of any background. The third is an all-audio set, featuring seven great half-hour shows that span an array of stories, women and leadership.

We’ll be sharing them widely in the months ahead, and I’m elated at the prospect of this rich and varied response to the feminist adage “If you can’t see it, you can’t be it.”

In June, and again in July, we gathered 20 women leaders from a larger pool of applicants for a Cultivating Women’s Leadership intensive.

After having refined and produced this gathering for the past ten years, in collaboration with CWL co-founder Toby Herzlich and co-facilitators Rachel Bagby and Elsa Menendez, I enter each annual cycle with curiosity.

I wonder about what might be revealed that’s different this year; about whether I still feel called to continue this form given the challenges of supporting its scholarship requirements financially; and wondering about its continued relevance to my own purposes and the truths of now.

One of our youngest participants was producing large-scale events featuring music and life skills as a way of igniting engagement among youth in Georgia, while the eldest was an accomplished biologist, systems thinker and author.

A farmer developing a site for homesteading education came, and a community developer working to teach permaculture, food self-sufficiency and self-esteem to low-income girls in San Francisco’s Bayview-Hunters Point neighborhood.

One woman is developing a framework for integrating arts with international economic development, while an attorney works to transform legal education for women and legal policies around incarceration. I was enthused to discover that this lawyer had been invited to help inform curricula for women in law school, the third CWL alumna working to help transform the law through this arena.

I am profoundly moved by the caliber and dedication of the applicants we select to work with and the transformative experience each of them has in her own way.

Though their numbers are not large, each is a deeply influential leader, reaching many more in her community. Their backgrounds vary widely and they are at very differing phases of their leadership evolution. Each one opens to seeing herself differently—with greater respect, love and appreciation—due to the program design, facilitation and reflections from a remarkable group of peers.

I recalled how well used I feel in producing these trainings, and how much I love our team supporting each woman’s transformations in sacred nature.

I remember the power of women collaborating toward effecting big change, and imagine that women’s abilities to grow each other’s leadership capacities may be one of the greatest untapped resources of this time.

We’ve just landed on dates and locations for next year’s Cultivating Women’s Leadership intensives, and applications are now available:

I so hope that you may feel inspired to apply, and experience the dimensional power and magic that’s possible among women in such an extraordinary peer community. Read more about the CWL intensives here.

And in the nearer future, I hope to see you at the 2015 National Bioneers Conference, October 16th-18th in San Rafael, California.