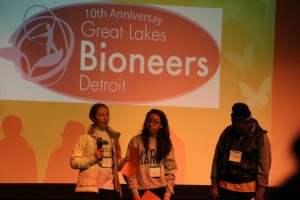 After attending Traverse City’s ‘satellite’ conference three years in a row; Paula Cathcart, IHM and Gloria Rivera, IHM wondered if it would be possible to sponsor a ‘satellite’ conference in Detroit. In 2004 they presented the idea to Great Lakes Bioneers (Traverse City) and to national Bioneers after consulting with 20+ Detroit organizations and colleagues who enthusiastically endorsed the idea and offered their support. The first GLBD conference took place in October 2005. GLBD will present its 11th conference this year.