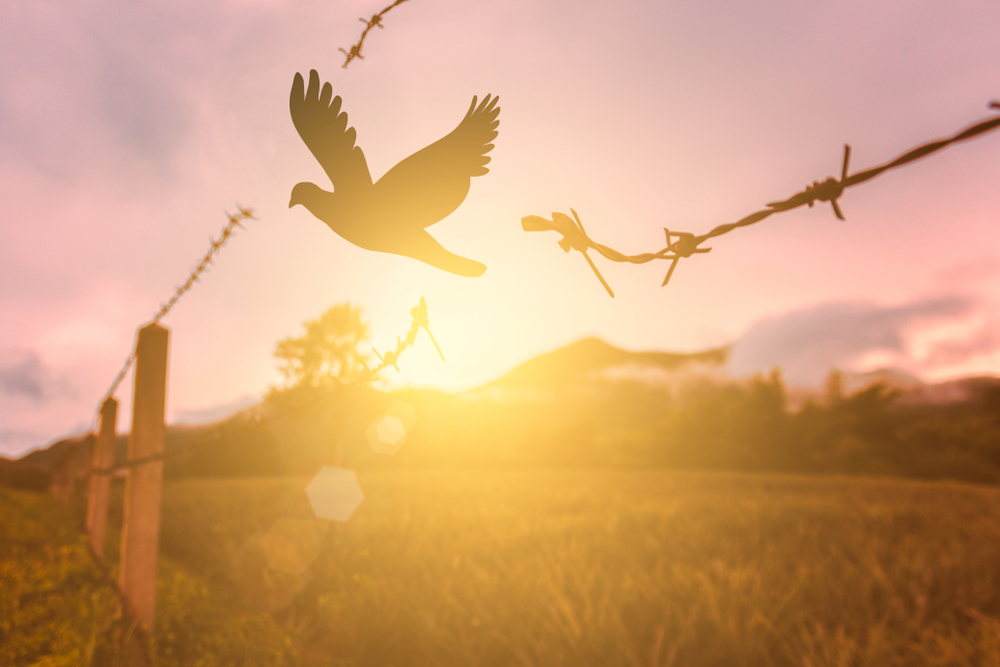 In a time when it’s easier to hate than to empathize, it’s an act of revolutionary love to have sympathy for those who seem different or who have hurt you. Emotions like grief and anger — despite their negative connotation — are necessary to living fully and embracing the full spectrum of human emotion. After all, our world is full of dualities. Without anger, there is no love. And without pain, there is no healing.

Author-activist Terry Tempest Williams is revered as a “citizen writer” for her work emphasizing environmental ethics and conservation, especially in the “Red Rock” region of her native Utah and in Alaska. Read our recent Q&A with Williams here.

We are eroding, we are evolving together. This is the place we create from, with love, with courage, in grief, and with anger. What do we do with our anger? With a name like Tempest, I can tell you I don’t have a lot of hope. But I have sought wisdom from my elders, the elders that we live near – Willie Grayeyes, a community organizer who now is a county commissioner in a Navajo majority in San Juan County Utah. When he was told that he was not a resident of the state of Utah, that it was an illegitimate election from an illegitimate candidate, whose family have lived in Navajo mountain for generations, when they asked what right he has to the state of Utah, he simply said, “My umbilical cord is buried here.” When I asked Willy what do we with do with our anger, he said, “Terry, it can no longer be about anger. It has to be about healing.” Going to the source of our pain, and recognizing it, owning it, apologizing for it, embracing it with a commitment to change.

And when I asked Jonah Yellowman, a medicine person among the Diné what he was seeing, he said, “Terry, we have to go deeper.” And so I ask us today, together, what does that look like for each of us, each of us in our own places with our own gifts, in the places we call home.

And Evangeline Gray, a medicine woman, who’s been fighting for water rights for her people in San Juan County for 30 years, still no water, she says to dwell is to see things as they are. And then you stay and fight for those things that you see for your community. It is a privilege, she said.

We are eroding and evolving at once. Perhaps Jonah’s call to go deeper is a call to acknowledge the power that resides in the Earth itself. The organic intelligence inherent in deserts and forests, rivers and oceans, and all manner of species beyond our own, even within our own bodies. We cannot create wild nature, we can only destroy it, and in the end, in breathtaking acts of repentance and renewal, try to restore what we have thoughtlessly removed at our own expense, be it wolves in the Yellowstone or willow flycatchers along the Colorado River. We are eroding and evolving at once.

How do we find the strength to not look away at all that is breaking our hearts? Hands on the earth, we remember where the source of our authentic power comes from. We have to go deeper. What has been weathered and whittled away is as beautiful as what remains – erosion, essence. We are eroding and evolving at once.

Bioneers co-founder Nina Simons is an award winning social entrepreneur and visionary thinker. Her current work is informed by years of experience writing and teaching about women, leadership and diversity.

As I sat at my mother’s bedside, single focused on her passage, my sense of self-worth as linked to work peeled away. I knew in a deeper way that we all have varying parts to play, in bridging worlds, in hospicing the old system and bringing forth the new, And that I was just where I needed to be. At her bedside, during her last week, I felt the ‘reality’ of this physical world meet the invisible world, the energetic realm, the place where hunches are born. I walked each day in a dreamlike state, filled with sorrow and aliveness, feeling myself an eavesdropper to another world. I had imagined that hospicing her through her illness for months might prepare me for her death, but it didn’t.

As the weeks pass, I miss her closeness, her voice and there’s a hole in my heart where the reliability of her love used to live. But I remember she’s still alive in me, now. And in the many invisible worlds that hold me.

The mystery of what happens after death preoccupies me. After she died, I could sense her presence, strongly and near at hand, for weeks. There’s a new curiosity being born in me, for how her essence might show up around me in others, or in dreams, for how I know she’ll be with me forever, or at least to the milky way and back.

I’m wide awake to the fragility of health in this toxic world. The impermanence of life is much realer to me now. Death’s nearness makes living shinier, more crystalline, full moons are fuller, foxes more breathtaking, laughter and wildness and freedom more precious. But the changes in my inner world are deep and foundational. I’m so aware now of how we remake ourselves every day, with every choice. Cultivating ourselves, to grow into our soul’s seed assignment, before we die.

A friend who knows the Mayan cosmology suggested I need to befriend the Death Mother, who lives in the South. While the Life Mother in the North is nurturing, fertile and generous, the Death Mother rules boundaries, limits and appropriate endings. I realize that throughout my devotion to Mother Life, I’ve focused largely on the fertility, the pollination, the wondrous and hopeful regeneration of seasons, perennials, cycles and systems.

Now, to better prepare myself for bridging the worlds, I’m focusing more on the beauty of a snag that stays standing, becoming habitat for crows, eagles and woodpeckers, and the insects and mycelium who return it to become nourishment for the next cycle of the soil’s creation. I’ve long believed that our collective focus on beginnings – while avoiding endings, and on progress, at the expense of history, lineage and tradition Is a relic of the patriarchal, colonial and capitalist systems we were all raised with. Finding that same bias in myself is humbling.

To bring all of our selves to this moment of pivotal change, isn’t facing the true danger of this time, the realities of all that’s dying, a necessary balance, medicine and motivator?

As an award-winning playwright, performer, activist and author, Eve Ensler is well-known for her work promoting women’s rights and fighting gendered violence. Read an excerpt from her latest book, The Apology, here.

What and why should one want to undergo such a grueling and emotional process? The answer is simple: freedom. No one who commits violence or suffering upon another, or the Earth, is free of that action. It contaminates one’s spirit and being, and without amends often creates more darkness, depression, self-hatred and violence. The apology frees the victim, but it also frees the perpetrator, allowing them deep reflection and ability to finally change their ways and their life.

My father, in my book, wrote to me from limbo, and it was very strange. I have to tell you, he was present throughout the entire writing of the book. He had been stuck in limbo for 31 years. I truly believe that the dead need to be in dialogue with us, that they are around us, and they are often stuck, and they need our help in getting free.

With this exercise, I believe now that my father is free. And because he was willing to undergo this process, he’s moved on to a far more enlightened realm.

As for those of you who cannot get an apology from your perpetrator, I believe that writing an apology letter to yourself from them is one of the most powerful things I’ve ever done, and it can shift how the perpetrator actually lives inside you, for once someone has violated you, entered you, oppressed you, demeaned you, they actually occupy you. We often know our perpetrators better than ourselves, particularly if they are family. We learn to read their footsteps and the sounds of their voices in order to protect ourselves. By writing my father’s apology, I changed how my father actually lived inside me. I moved him from a monster to an apologist, a terrifying entity to a broken little boy. In doing so, he lost power and agency over me.

We cannot underestimate the power of the imagination. And I just have to say in these times that we are living in, our imagination is our greatest tool. It is shifting trauma and karma that has numbed our frozen life force, and in the deeper and more specific my imagining and conjuring in this book, the more liberation I experienced. When finally at the end of the book my father or me, or me or my father, or both of us as one – I’m so not clear who wrote this book – my father says to me, “Old man, be gone.” It was exactly like the end of Peter Pan. Do you remember when Tinkerbell says goodbye and goes *poof* into the ethers? My father was gone, and to be honest, he hasn’t come back.

And I want to talk a little bit about forgiveness because I think often we are survivors of all kinds of things, whether it’s racial oppression, or physical oppression, or economic oppression, or sexual violence. We’re told that we have to forgive and get over it. I don’t really believe that the mandate is ever on the victim to forgive, ever. But I do believe that there is an alchemy that occurs with a true apology, where your rancor and your bitterness and your anger and your hate releases when someone truly, truly apologizes.

So I say to all the men here, what we need now is for men to become willing gender traitors, and stand with us, and apologize so we can all get free.