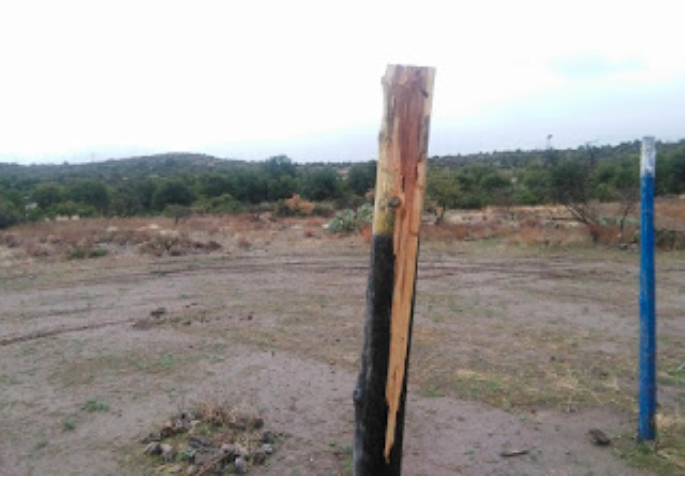 On March 17, 2018 a sacred Native American religious site in southern Arizona was destroyed and it seemed like nobody cared. A representative from the Apache Stronghold came to Oak Flat, a sacred place where the San Carlos Apache people connect to The Creator through prayer and ceremony, and found the crosses marking the four corners of the sacred space intentionally destroyed. Two of the crosses were ripped from the ground and two were left standing, but were violently hacked with what appears to be an ax. Ceremonial eagle feathers were ripped from the crosses and tire tracks criss-crossed the sacred grounds.

The racially motivated violence embedded in this act of vandalism against one of the tribe’s most important religious sites makes it a hate crime, no different than when a church is attacked. San Carlos Apache elder, Wendsler Nosie, described the reality on the ground to AZFamily.com (and subsequently released his quote to Bioneers):

“This site is like a church. If this attack had happened at a church, it would be considered a crime A lot of people have come here to be healed from sickness and for their loved ones, asking for blessings. Throughout the year, this has been a site for families to gather and teach their children about the land. There are federal laws that are supposed to protect a place like this. We have never seen this kind of violence against us here. There needs to be accountability for this crime.”

It sent a terrifying message to the San Carlos people that what they hold sacred is worthless. Unfortunately, while explicit violence such as this is uncommon, overall disregard for sacred sites is nothing new to the San Carlos Apache.

Hate Crime Is Just the Latest In Assaults Against Apache Religion

San Carlos Apache and their allies have been fighting to protect Oak Flat for over a decade. The protectors call themselves Apache Stronghold, and formally organized in 2014, when John McCain snuck a rider into a Defense Bill that essentially gave the (stolen) federal land to Resolution Copper to destroy for mining.

Bioneer, Naelyn Pike, and her tribe have been fighting to protect Oak Flat, a sacred site to the Apache people, for over a decade, from being destroyed through one of the world’s largest proposed copper mines. Naelyn speaking at the 2017 Bioneers Conference.

Last weekend’s hate crime committed against the Apache at Oak Flat is the latest and most direct assault on tribal members’ ability to practice their religion. According to the FBI, a hate crime is the highest priority of its Civil Rights program and they must be investigated, especially when victims are engaged in a federally protected activity. Chi’Chil’Ba’Goteel, as Oak Flat is the Apache placename for the site, has been a sacred site for Apache people since time immemorial. Under the American Indian Religious Freedom Act, Native Americans have a right to access to sacred sites and the freedom to worship through ceremonial and traditional rights. The act requires all governmental agencies to accommodate access to and use of religious sites.

Is This Hate Crime Being Treated Seriously?

The American Indian Religious Freedom Act requires the U.S. Forest Service to work with law enforcement to investigate and prosecute the perpetrators. When the crime was discovered over the past weekend, members of the Apache Stronghold demanded an immediate response from the U.S. Forest Service and local law enforcement. But the site was not taped off and one bystander alleged that the officer sent to investigate claimed he “couldn’t find the spot.” Unfortunately, this kind of response is common when it comes to crimes against Native Americans. It has been widely reported elsewhere that crimes against Native Americans (especially murders and missing women) regularly go uninvestigated, sending the message that Native lives don’t matter.

The Apache Stronghold wants to cooperate with the U.S. Forest Service and Law Enforcement to ensure this crime gets investigated and brought to justice before too much time has passed. Here is the message Naelyn Pike’s family shared with Bioneers to spread throughout our community and beyond:

What has happened to our holy ground should be no different then any church and needs the same respect. Who ever has done this hate crime needs to be held accountable. If anyone has information, please contact local law enforcement or Tonto U.S. Forest Service. This is a Non-violent action to demand greater protection from hate crimes in our national forest and to stand together against attacks to prayer site. Please sign our petition in partnership with the Poor Peoples Campaign: A National Call for Moral Revival, or directly contact the Tonto National Forest Supervisor’s Office to tell them that hate crimes cannot be tolerated and that the Apache deserve justice and equal rights to all other Americans at:

Taking A Stand for Sacred Sites

As we learned at Standing Rock in 2016, the destruction of Native American sacred sites is ongoing. Just in Bioneers’ Bay Area backyard ,the West Berkeley Shellmound, , the oldest inhabited site in the region, is slated for development. Juristac, a sacred site to the Amah Mutsun tribe near Gilroy, CA, is being threatened with a sand gravel mining operation. These stories are rarely told in the mainstream media. Now more than ever, when America’s values of equality and justice for all are being tested at every turn, it is important that we all stand up for the disempowered peoples whose human rights have been systematically erased for generations. Stand up today by supporting the Apache Stronghold at Oak Flat. Stand up tomorrow and beyond for the many vitally important fights being waged and Indigenous movements being built across this continent and around the world.