Healing From Colonization on Thanksgiving and Beyond 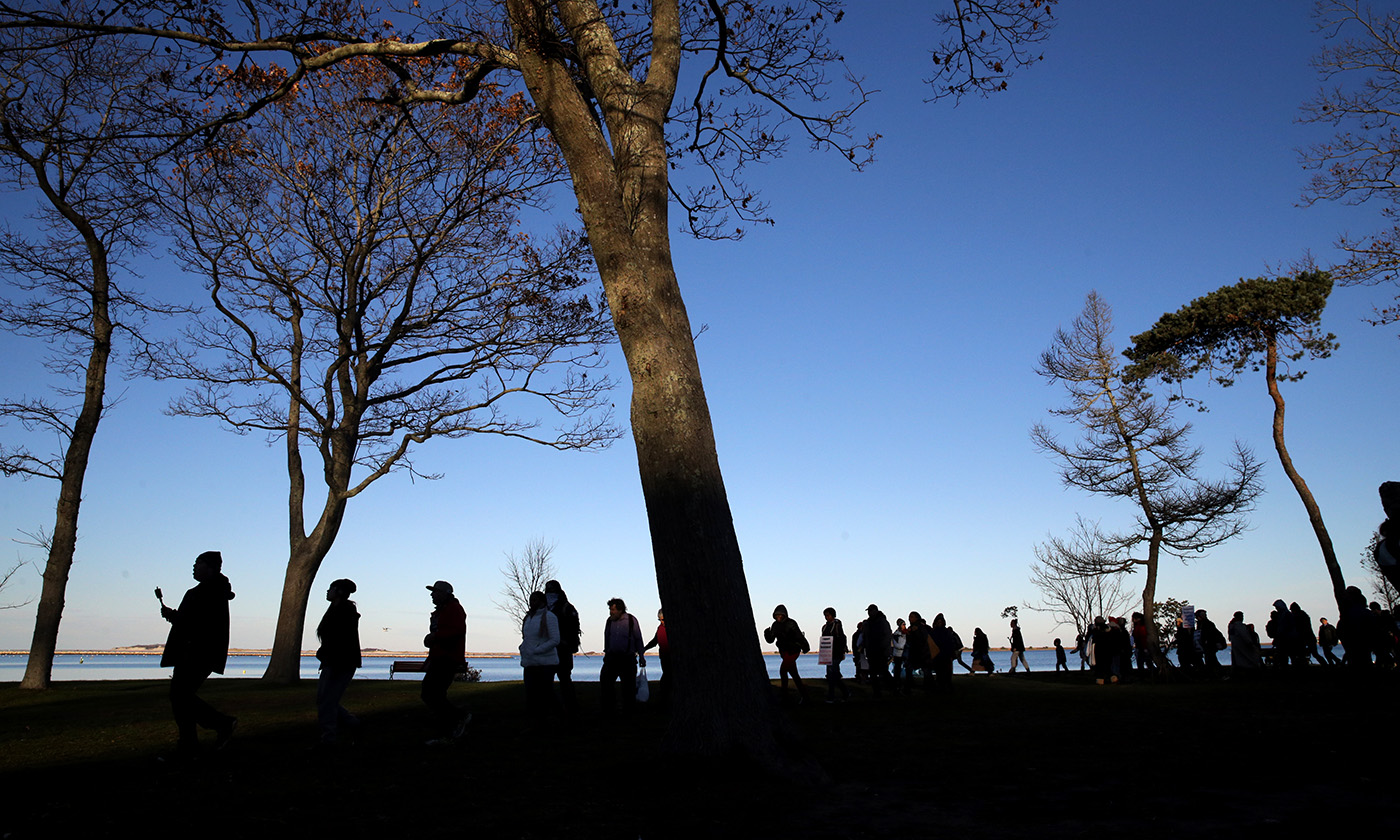 This article was originally published in Yes! Magazine on November 27, 2019 and is licensed under Creative Commons.

Edgar Villanueva and Hilary Giovale share an ancestral bond that is far from unique, but one that is rarely acknowledged. Edgar is a member of the Lumbee Tribe of North Carolina. For generations, his family has lived in the same region where Hilary’s ancestor received a land grant after his family migrated from Scotland in 1739. Now 280 years later, Edgar and Hilary reach across the Thanksgiving table to bridge the painful colonial gap.

As a Native American, I’m often troubled by the way that Americans approach Thanksgiving. By holding onto an idealized image of a harmonious feast between the Pilgrims and Wampanoag, we’ve overlooked the brutality that Native people have faced since the arrival of Europeans. For many Native Americans, Thanksgiving is a day of mourning and remembrance—a reminder of the genocide of our people, the loss of our way of life, and the theft of our ancestral lands.

I propose seven steps to healing: grieve, apologize, listen, relate, represent, invest, and repair. I initially developed these steps in relation to my professional field of philanthropy, but they are also applicable to a personal process of decolonization.

By opening up dialogue and rejecting colonial divides, we create genuine mutual understanding.

The first step to healing is acknowledging our nation’s violent history and taking time to grieve what happened. Without grieving, we simply cannot move forward. Then, we must apologize. This means a genuine acknowledgement of past wrongs, with an outward focus on the impact these actions had on others. This step of healing helps to build the foundation for reconciliation.

Once we have grieved and apologized, it is time to listen. Listening means being open, empathetic, attentive, and considerate. One simple way to listen is to follow Indigenous accounts on social media. Some of my favorite Indigenous-run Instagram accounts are @indigenousgoddessgang, @lilnativeboy, @seedingsovereignty, @indigenousrising, @repdebhaaland, @_illuminatives, @ndncollective, and @project_562. Listening is a way to learn more about the issues affecting our community—most of which, like lack of economic opportunity and poor mental health, are a direct result of colonization.

If we listen openly and empathetically, it naturally leads to the next step of healing: relating. By opening up dialogue and rejecting colonial divides, we create genuine mutual understanding. The Native principle mitakuye oyasin (all my relations) is the idea that our interdependence as human beings is inescapable. When we understand this, we can truly heal together.

The final step of this healing process is to repair. Reparations are the ultimate way to build power in exploited communities.

Once we relate, we must represent. That means restoring power to Native Americans in the decisions that affect our communities. It’s a difficult change to make, particularly for those who stand to lose power. But that discomfort is part of the healing. Representing means voting for Indigenous leaders, holding the government accountable for their broken treaties, and supporting movements that fight against racist and demeaning depictions of Native Americans.

The next step of healing is investing. For some, that means donating to Native organizations. This year I started the Liberated Capital fund, a giving circle that supports Indigenous and other people-of-color-led initiatives working for transformative social change. But for others, it could be as simple as supporting Native-owned businesses such as Ginew, Trickster, and Bedré. It also means divesting from organizations and companies that hurt Native communities, like the Keystone XL Pipeline.

The final step of this healing process is to repair. Reparations are the ultimate way to build power in exploited communities. For Native Americans, that means ensuring land and water rights, returning sacred ancestral lands, and providing adequate resources to our communities. This includes giving Indigenous communities full property rights on our reservations, rather than letting the government hold them “in trust,” preventing us from putting the land to use by selling it, buying more, or borrowing against it.

When we all take these steps to heal, we can both address the harms of the past, and stop the cycle of harm that continues because of the lasting legacy of colonization. It’s a process that requires the collective involvement of our country as a whole. This Thanksgiving, I encourage everyone to take time and begin this process of healing—recognize the hurt that was caused by colonization in order to bridge colonial divides and look forward to a new and more equitable future.

European-descended settlers have unique opportunities to bridge the colonial gap. It can begin by simply changing how we introduce ourselves. The first time I said out loud, “I am a ninth-generation American settler. All my life, and ever since 1739, our family has been living on stolen Indigenous land,” my worldview started changing dramatically.

Within White settler culture, our identities as settlers tend to be invisible to ourselves. We are entangled with systemic White supremacy and national mythologies designed to keep us comfortable and complicit. Many of us have developed multi-generational bubbles of denial and amnesia about the genocide, broken treaties, and stolen land that enabled us to stay. Our opportunity is to willingly pop those bubbles so we can collectively decolonize and make repairs.

European-descended settler families and communities need to begin our own healing work, together. Our social conditioning makes it tempting to rush into “doing something” right away, but our first step in bridging the colonial divide can simply be feeling the discomfort of the true history, and being open to learning: how has this history benefitted us while inflicting unbearable trauma upon Indigenous peoples?

Facing history and being willing to grieve helps settlers develop the capacity to apologize. Apologies for historic harm are quietly taking place throughout the United States. My grieving process included writing an ancestral apology letter to Edgar, which opened healing potential for us, our families, and our extended networks.

When settlers commit to our own process of healing and decolonization, it becomes possible to build bridges toward Indigenous peoples and communities.

Though it seems counterintuitive, embarking on our own healing process as settlers helps us bridge the colonial gap. This Thanksgiving, I recommend groups of settler friends and families acknowledge their settlerhood out loud to each other, followed by a prayer or a moment of silence.

Around the Thanksgiving table, ask questions. Where did your people come from, and why? What types of oppression or poverty did your family face in the time before and during migration? Did your ancestors choose to leave behind beloved lands, families, languages and cultures, or were they forced? Prepare some of your ancestral foods for the Thanksgiving feast. Honoring our settler ancestors can restore their humanity, which in some cases was compromised through dehumanizing acts of colonization and enslavement.

Beginning this Thanksgiving, and continuing throughout the year, settlers can learn which First Nations previously and currently inhabit the land on which they live and gather. Honor the Indigenous ancestors, as well as their surviving descendants. Amongst family and friends, share Indigenous stories and histories.

When settlers commit to our own process of healing and decolonization, it becomes possible to build bridges toward Indigenous peoples and communities. We can seek opportunities to visit Indigenous-organized events and spaces, listening far more than we speak, believing what we hear, and allowing ourselves to be quietly impacted by what we observe.

It is not the task of European-descended settlers to become white saviors and “fix” colonial damage within Indigenous communities. But, we can learn to join in solidarity by supporting the work already being envisioned and led within Indigenous communities. Follow Diné speaker Lyla June Johnston’s guiding question: “How (if at all) can I help?” Listen and act accordingly.

Sharing food, handshakes, and conversation creates the universal human glue of empathy and compassion. Cultivating relationships across difference facilitates our ability to invest resources, time, and energy in Indigenous communities, and generates the collective will to make reparations.

When we build bridges from the ashes of the colonial gap, the ensuing relationships are things for which we can really be grateful at Thanksgiving and beyond.

This article was originally published in Yes! Magazine on November 27, 2019 and is licensed under Creative Commons.

Both Edgar and Hilary are long-time Bioneers Conference participants. Watch a video of them discussing How To Be a Good Ally. Read more about Hilary’s work here. Read More about Edgar’s work here.

Hilary Giovale is a community organizer, philanthropist, and author of a forthcoming ethnoautobiography about her process of decolonizing and healing from whiteness.