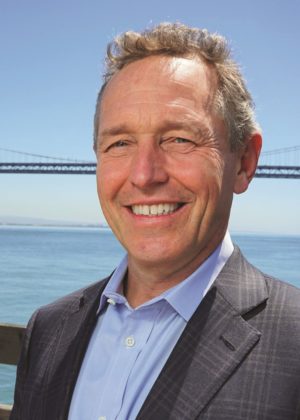 For anyone paying attention to the decades of simply devastating news about the state of the environment and the human communities who inhabit it, the culprits are fairly clear. Our global economic system has incentivized much of the wrong activity, allowing massive globalized corporations to run rampant over human rights, social justice and the environment. “It’s the corporations, stupid,” as the bumper sticker says.

Thomas Van Dyck has been committed to reshaping this skewed economic incentive structure for his entire career. From helping to grow and meaningfully transform the field of Socially Responsible Investing to founding one of the leading Shareholder Advocacy networks in the world to providing key guidance and leadership for the Divest/Invest movement, Van Dyck has been, quite literally, doing everything he can possibly think of to transform our plunder-driven economic system. Routinely looked to as an expert by major publications like The New Yorker, The New York Times, The Washington Post and Moyers & Company, Thomas Van Dyck is a global leader and changemaker.

Several years ago, the Bioneers Conference hosted a panel session on Reforming Corporate Power with leading advocacy groups representing a range of different approaches, from working “within” the system (e.g. Future 500) to intense outside activist pressure (e.g. Greenpeace) – we called it Good Cop/Bad Cop. Given that corporations represent nearly 60% of the 150 largest economic entities in the world, it was clear that the answer is “yes”: both the carrot and the stick are necessary for any sort of substantive reform.

A glance at Van Dyck’s career path shows this exact inside/outside approach to corporate power. On the carrot side: he’s helped to shift billions of dollars in investments to realign corporate and investor ethics. On the stick side: in 1992 Van Dyck founded the innovative As You Sow Foundation, which works to hold corporations accountable by spearheading the aggressive use of shareholder advocacy to force corporate change at the institutional level while providing major support to influential advocacy/activism organizations (think Rainforest Action Network and The Ruckus Society). I’d encourage readers to take a look at the ‘recent accomplishments’ on the As You Sow webpage. Those folks are really making a difference that millions of us will benefit from on a daily basis.

A mover and shaker in the game since his start as a young man in the early 80s, Van Dyck shows no signs of slowing down. He’s been immensely influential in the Divest/Invest movement, which has been spreading like wildfire since the effort began on select college campuses several years ago. While serving as mentor and guide to young Divestment leaders like Chloe Maxmin and Katie Hoffman, Van Dyck was running the numbers in the background to contextualize the endeavor. Divest/Invest was a full circle return, given he got into the investing business in the early 80s when the Divest South Africa movement was in full swing. According to Van Dyck, major institutional investors pulling out of South Africa were being asked to eliminate up to 40% of the companies in the S&P 500 at the time. Today, it’s more like 8% and, as it turns out, by dropping carbon majors, institutional returns are essentially the same – slightly higher, in many cases. To date, the Divest/Invest movement has commitments on the books to reassign $5 trillion dollars, and rising.