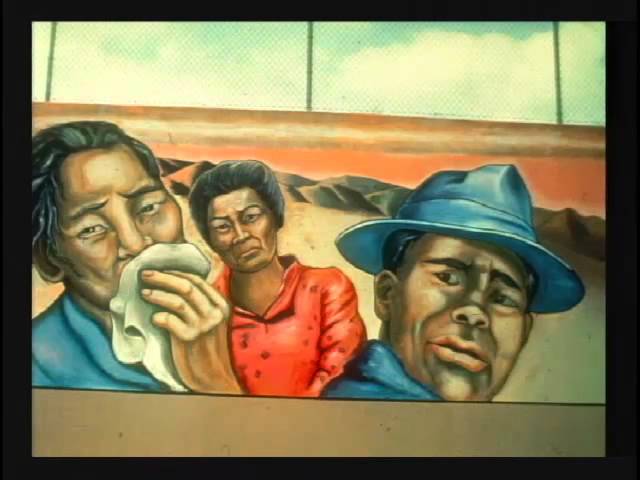 Judy Baca, one of the most renowned “engaged” artists of the last half-century, will be presenting a keynote speech at the Bioneers 2023 Conference. Click here to register for the conference or to learn more about the conference speakers.

In 2007, artist Judy Baca joined Bioneers for a conversation centered on her inspiration:

“That’s how I came to be a muralist. It came out of my desire to work across differences, to work with young people, and to create something that had meaning in the midst of a social revolution. I saw these young people fighting with each other at a time when they needed to join and work for the betterment of their communities.”

An artist best known for her murals speaking to social justice issues, leaders, and solutions, Baca has been bridging divides and bringing communities together for half a century, but her work hasn’t seen widespread exposure until recently — a story told in a New York Times article titled “A Judy Baca Moment: ‘My Work Has Been Good for a Long Time.’”

In the article, Baca points to the rise in social justice activism and the art community’s desire to keep up with the times as reasons for her recent soaring popularity. “They are going, ‘Oh my God: We don’t have a Latina. Oh my God: We don’t have very many women. Oh my God — and then you know there’s like, ‘Get her — we click off these five things,’” she says in the article. “I mean that’s not to say that my work isn’t good. I mean no — my work has been good for a long time. And it’s been better and better.”

Baca is perfectly on-point when she says she’s been good for a long time — not just “good” as an artist, but “good” as a social-justice warrior. Working against the grain and without any expectation of praise from the art establishment, Baca has served as a sort of artistic conduit for neighborhoods and community members with something important to say. Her murals are generally the result of close collaboration — both in ideation and execution — with the people who live, play, or work near a mural site. As a result, Baca’s completed works often speak to important justice issues, but the shared creation of the works can be just as moving.

In celebration of Judy Baca’s recent, much-deserved acclaim, we’re happy to share two inspirational keynotes presented by Baca at Bioneers Conferences, alongside a handful of media further telling her story.

In this 2003 presentation, Baca describes how art can reconnect people to place, revive disappearing history, and repair cultural root systems.

PODCAST | Tattooing the River: People, Place and the Art of Diversity

In her 2007 Bioneers presentation, Baca discussed unleashing the power of public art to help transform society.

Judy Baca, the renowned Chicana muralist who paints LA’s forgotten history: ‘My art is meant to heal’: “I had to just perceive what I was doing as significant for myself and my community and move ahead with willfulness and belief, buoyed by the community people I worked with – not by the arts,” says Baca in this piece from The Guardian.

There’s more to Judy Baca than her ‘Great Wall of Los Angeles’ mural: Find a more in-depth history of Baca and her work in this article from the Los Angeles Times.