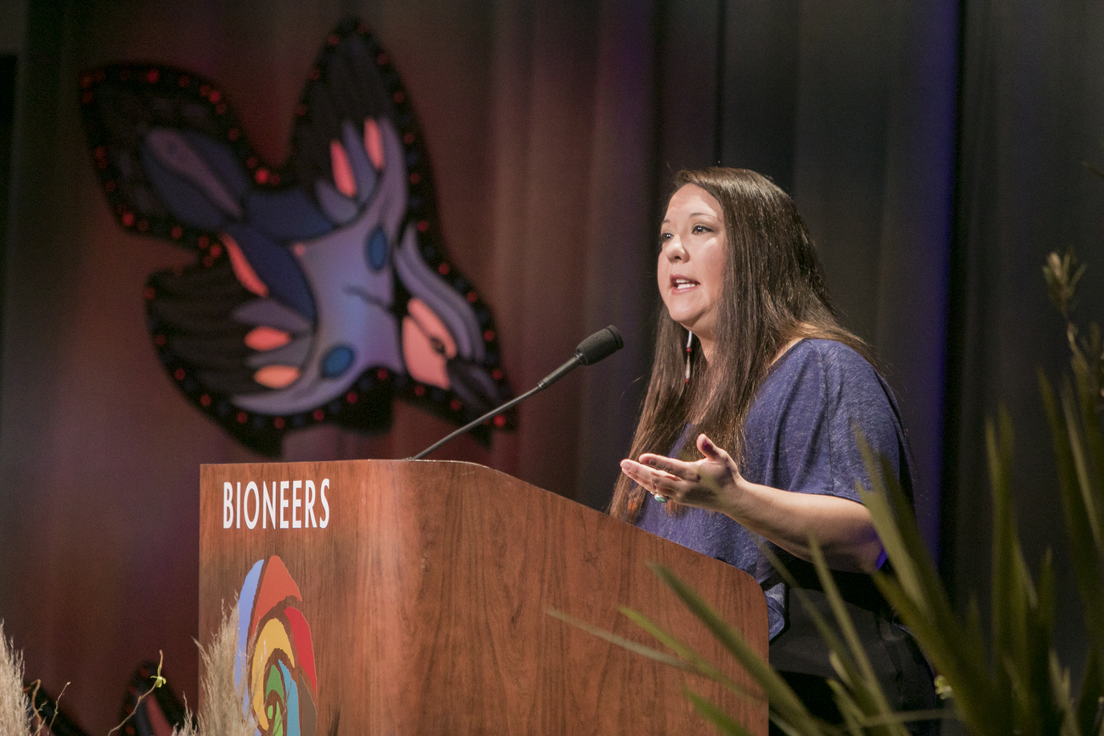 Kandi Mosset is a mother and member of the Mandan Hidatsa Arikara Nation of North Dakota. She is known worldwide for her involvement on the frontlines of the protests at Standing Rock and as a leading voice in the fight against environmental racism. subsequent leadership on pipeline and resource extraction activism. Along with fellow water protectors, Mosset traveled from the protests in South Dakota to the 2016 Bioneers Conference to provide an update on Standing Rock that reached millions and returned to share a deeply moving keynote address in 2017. She currently works with the Indigenous Environmental Network (IEN) as Lead Organizer of the Extreme Energy and Just Transition Campaign, and she previously served as the IEN’s Tribal Campus Climate Challenge Coordinator. Mosset is passionate about bringing visibility to the impacts of climate change and environmental injustice, specifically those affecting Indigenous communities throughout the world.

Bioneers was thrilled to interview Kandi Mosset about the significance of the fight at Standing Rock for humanity’s fight to protect Mother Earth. This is an edited excerpt of that interview.

We say Mother Earth because the mother provides and keeps a child alive for the first few years at least. On planet Earth, the food is grown in the soil, the air we breathe. When we say Mni Wiconi, “water is life”, it’s more than just a saying. The very essence of being alive is water, because we are made up of it, it’s all around us, it’s in us. If we abuse the water, we’re abusing ourselves.

All of these things are connected. All of these ecosystems are circular. The problem with the world today is that a lot of things are very square. We like to put things in boxes. We like to label things in boxes. We like to live in boxes. It’s allowed us to be disconnected from the very essence of ourselves, which is that we are part of the system; not above it, not beside it, not over it, under it, we are part of it. Reaffirming and understanding that as humanity is being brought back because of what we’ve been able to show with the fight at Standing Rock.

This moment we find ourselves in was prophesized 200 or 300 years ago. The major fights against Dakota Access Pipeline and the on-the-ground fights were on sacred sites. There are over 380 sacred sites in that corridor, and there’s a lot buried under the ground that people don’t see. Medicine was put there to make sure that diverse nations who were traditional enemies could gather together there and trade. We each had our own skill sets. My tribe, for example, Mandan Hidatsa Arikara, are farming tribes. We lived along the Missouri, and we had water for irrigation. So we would have more of the farming goods – the corn, the squash, the beans – whereas another tribe would have meat. And so we recognize diversity even in ourselves, and recognize that, even as traditional enemies, we relied upon each other for those times of trade. People would tell the stories to the youth, the future generations, about how it was really important to listen and understand each other, because the significance of the medicine would come up again. And here we are. And it is significant.

With the fight at Standing Rock, we’ve been able to show that over 500 tribes can still get together for the same cause, which is for justice and for truth and reconciliation, and for a change of the system. That fight has helped that whole narrative move forward, so that people understand that it wasn’t just about Indigenous Peoples, it was people in general reaffirming your attachment to the sacred, or reaffirming yourself as an individual. It doesn’t matter the color of your skin or whatever, you have to do that as a human living on the planet.

There’s also the Hopi prophecy about how all of the people of the rainbow would again gather and unite, and that’s what would change the world. What they mean by the rainbow is there’s all different colors of people. It’s not just us as Native people. We have our allies that stood and are standing in solidarity with us. It was about more than just the pipeline, it was about capitalism and colonialism, and how we have to decolonize our minds and our bodies and our spirits.

That’s where the theme of Indigenous Rising comes from. We never have changed the narrative, and what we’ve been saying for over 500 years is that capitalism is not sustainable. Greed could be our undoing, and we had to recognize that, not just as Native people, but as humanity.

So to see it actually come alive during that time, personally, gives me goosebumps — when I talk about how it could be the change that the entire world needs to see, that there is a different way.