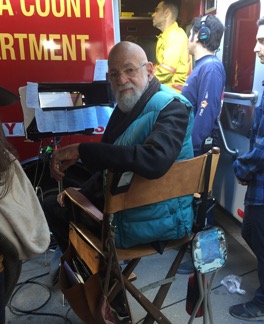 Jeremy Kagan is an award-winning (including Emmy and Cable ACE awards) director/writer/producer of feature films and television, and a film professor at USC where he runs the Change Making Media Lab. He served as Artistic Director of the Sundance Institute and is the author of Directors Close Up and My Death: A Personal Guidebook. Jeremy is a long-time member of the Bioneers Community and has lead panels at multiple Bioneers Conferences including The Crossroads of Social Change and The Choir and Beyond.

Like many of us I have been deeply troubled by excessive gun violence in our country. I wanted to tell a story that would help us to face the realities of this issue and to feel what others have had to feel.

Rather than produce another documentary about gun violence, I decided to address this critical issue from a humanistic, dramatic narrative perspective, and to tell two stories at once. By using a multiple screens process, I have intertwined the story of the person who is shot simultaneously with the story of the shooter, to create an impacting visceral experience.

My experience over the last decades with Bioneers, having made some videos for the organization, has been a source of inspriation on how to use media to make a difference.

SHOT is a captivating roller coaster ride with terrific performances from Noah Wyle, Sharon Leal, and Jorge Lendeborg, Jr. The powerful visual storytelling involves you in an extreme real time drama when an innocent bystander is shot standing next to his wife, while we also experience the tense tale of the shooter, who is trying not to get caught.

We go to the movies to meet people we care about in challenging situations.  We identify with the choices these characters make, and sometimes what happens to them, encourages us to take action in our own lives.  SHOT is this kind of movie

The movie ends with a call to action giving the viewers an opportunity to join the efforts to change this gun epidemic.

Here is the trailer: https://trailers.apple.com/trailers/independent/shot/

I hope this movie will make real and positive change.

In solidarity and compassion,

Chairperson of Special Projects for the DGA

Get involved. SHOT is not just a movie, it’s a movement.