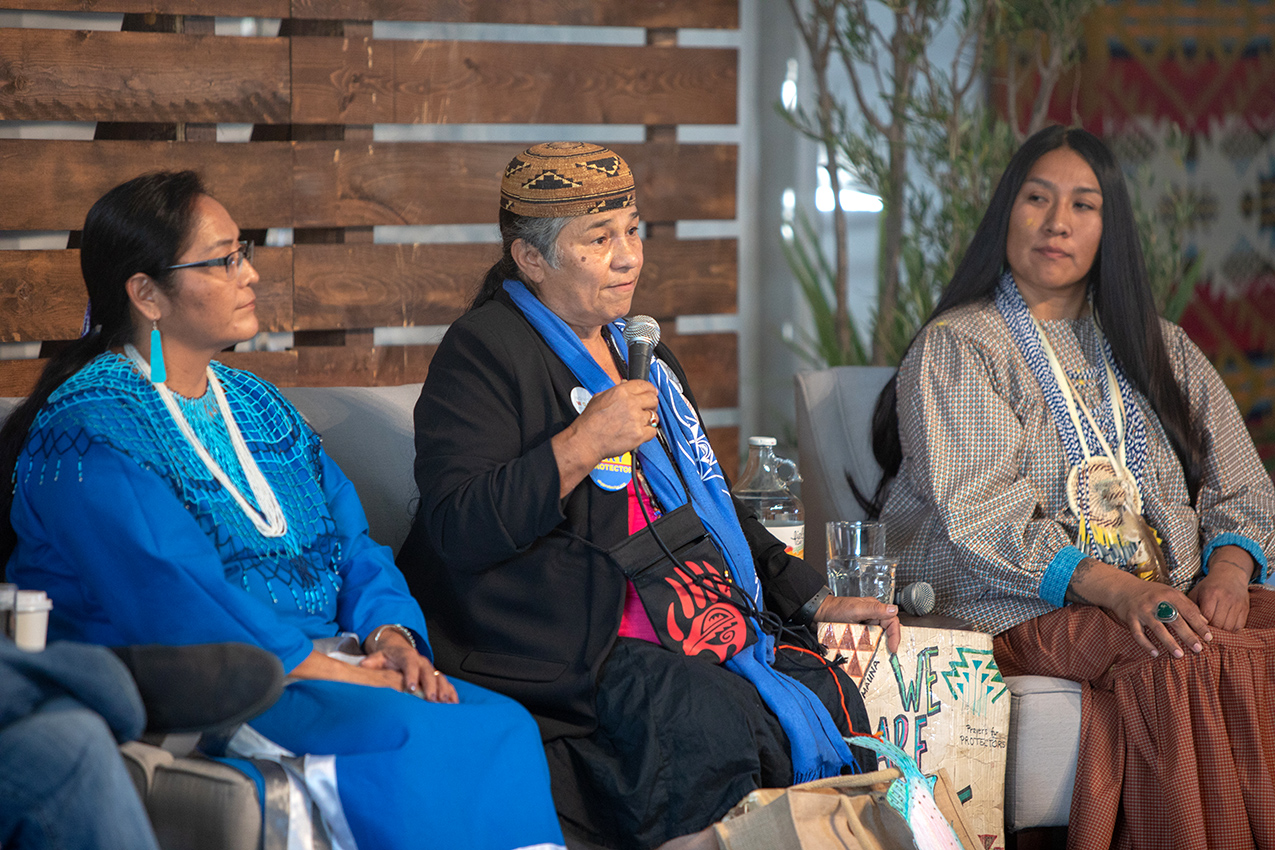 The Lakota phrase “Mní wičhóni” (“Water is life”) was the protest anthem from Standing Rock heard around the world, but it also has a spiritual meaning rooted in Indigenous world views. For Native Americans, water does not only sustain life, it is sacred. How can Native Americans create cross-cultural understanding for a river’s rights to protection? How do we help guarantee such “rights of nature” in mainstream jurisprudence? As we take leadership roles in restoring our rivers, how do we blend our Traditional Ecological Knowledge with contemporary science? Tribal leaders working to restore riparian ecosystems explore cutting-edge Indigenous approaches to watershed management and restoration.

CLAYTON: Standing Rock touched so many of us in so many ways. The world really looked at that moment, and it was a global teaching moment.

In our culture back home, the thunder beings are the ones that bring the rain in the spring,  in our cosmology. What I was told in that moment of Standing Rock, when the whole world learned about mní wičhóni, they learned about connection to the sacred elements, the connection to the sacredness of place, and it moved people because they got connected, and got understanding in their most simplistic form. So that teaching,“water is life,” moved people to actually give a dang and to put their bodies on the line, Native and non-Native alike.

CALEEN: I’m the fifth chief of my tribe. We don’t really call ourselves chiefs, but we borrowed that word, because more of you know what that means. Because if I said, I’m a [Wintu word], a Winnemen Wintu [Wintu word], would you know what I was talking about? No, you wouldn’t. So I’m following a line of only five leaders who have been in charge since the taking of California. The last leader before me, my Grams, was a woman chief too, and then myself. We’re not elected; we’re born into it. We are trained. We grow up with our constituents and we already know who the next chief is.

My grams brought us through that Shasta Dam when she took leadership. Her dad, who was the chief before, died in 1938. I think he died because he had a heartache about the Shasta Dam. Nobody could believe they were going to put all those mountains under water, all of those sacred things going underwater. He couldn’t do a thing about it. So she took over in the1938 as the chief, and she brought us through that time of heartache and post-traumatic stress – from the killings to the flooding of our land – trying to hang onto everything that we have.

It’s not an easy thing to do, and we’re calling on everybody. As the chief, I have a lot of things to do. Now I’m reaching out to the world, asking, are there other Indigenous People and leaders around the world who are working on the same thing? Are you singing to the water? Are you walking around the lakes? And what are we doing all together for the water around the world?

We are Salmon People – most California Indians are Salmon People – and we’re Pacific Coast Salmon People, meaning that these fish are so miraculously in connection with the Creator that they only do things one time. When they swim back upriver and they lay their eggs, and they all die before the eggs are hatched. Then it’s repeated. The little ones swim out and  down to this estuary, and they change into saltwater fish. They don’t say, “I’m a freshwater fish, I made a mistake. Here I am down here in the salt water, I better swim right back up there where I come from.” But they stay, and they change.

We did a war dance on Shasta Dam to oppose raising the level of the Shasta Dam, and New Zealand responded. Our effort was to tell the world what’s happening here to this small tribe, to this water system, and 87 papers around the world picked up the story. New Zealand was one of them. They asked us, Do you want your salmon back? It’s like, What, you have our salmon? Okay, where is New Zealand? [LAUGHTER] And we had to go there and we had to dance for those salmon.

But when we got there, the Maori people were so family like, and they made it totally possible for us to do this atonement, to do this dance for our salmon with them. There’s a film out there called Dancing Salmon Home. If you haven’t seen it yet, that’s the whole story about it.

When I looked at New Zealand, I thought, Oh, that’s an island. But even on that island, they have a mountain, Mt. Aoraki, Mt. Cook, the destroyer of the island, named that mountain, but Mt. Aoraki has ice waterfalls. It is the only place in the world that our salmon survived. Everywhere they were sent, they died, except for New Zealand.

CARLETTA: The Havasupai people, we’re about 776 people left in Northern Arizona in the bottom of the canyon. We were also pushed in there. We were originally on the Colorado Plateaus. We roamed that whole area from the San Francisco peaks to Bill Williams mountain, to the Seligman area. We had a lot of territory. At one point in time, we have a really bad, sad history that was told to me when I was a child. I think that’s when it really began in my mind that I cannot just live this life without speaking up about what happened to my people.

As I learned more from my family, my parents, my community, and my elders about what was really going on, it just got me really, really angry.

The Havasupai people are called Havsuw’ Baaja, means “supai”. Havsuw’ Baaja means “people of the blue-green water”. That’s why I’m dressed like this today in a big blue outfit. And I was teasing one of my friends. I said, you can’t miss me walking across, I’m really blue today. [LAUGHTER]

My elders really taught me if you’re going to go out there and speak, you have to dress it, you have to walk it, you have to talk it. You have to sacrifice some of your life and your family, and that’s what we’ve been doing – sacrificing our time for the water.

But you also have to listen. You have to listen to your surroundings. You have to listen to the water. Go sit over there, see if you’ll hear something, feel something. So we have songs for these waters that flow through, and sometimes it could sing to you and you could feel it. If you don’t hear it, you’ll feel it, and that’s what we feel, and that’s what we’re carrying here today as a message to all of you that are here today, caring. You’re asking about what should we do, what can I do.

Then there’s a whole deeper purpose in why we’re here. And I think the whole connection that we have today, right here, is the water, right here. We cannot go without a couple of hours without drinking water.

The internationally funded uranium mines live right above one of the largest groundwater aquifers in Northern Arizona, called the Redwall-Muav Aquifer. It’s a huge lake underneath the earth, and a lot of the springs drain right into the Colorado River. These international mining companies come onto federal lands, our aboriginal territories, and stake uranium claims. The United States is allowing that to happen. There goes your water, it just gets drained out..

As Havasupai, we’re one of the last tribes in Arizona to declare our water rights for many reasons. One is that we don’t want the federal government to tell us “this is how much money/water that you’re going to get.” We didn’t want to be a part of that. The Havasupai Tribe is a very close, closed kind of a community. But 2018 was the first time we took steps to claim our water, and it’s going to be a long legal process. I don’t know how long that’s going to take. Some tribes have taken 30, 40 years just to declare their rights to water in Arizona.

There are 21 tribes in Arizona that have claimed their legal rights to water. This affects the Havasupai, because we’re at the headwaters of all the water that goes down the Colorado River. So the Havasu springs drains into the Colorado, and the Colorado goes down, services Nevada, California, all the way down to Southern Arizona, even into Mexico. Well, it used to go into Mexico, now it’s dry there.

Then the developments that are happening in the Phoenix Valley and the Las Vegas area, they’re just sucking up the water like there’s no tomorrow. They don’t even think about conserving or anything. That’s pretty scary when you really think about it. What are they leaving? At least leave a little bit behind, but they don’t think about it that way.

I see that most of the folks in America now just live in the moment. We don’t look at 50 years or 100 years from now.

CC CARRIE: For us, mní wičhóni – water is life. I tell people, young people, older people – if you don’t understand that basic concept, I don’t know what to tell you. Every day we use water. Give thanks for it, for every drop.

We went up to Standing Rock with our leader, Wendsler Nosie, former chairman and councilman in San Carlos. We went up there with gifts. When you’re on this right path of sacrificing yourself, and feeding your spirit, and you’re away from home in your own community, because Oak Flat is 44 miles off our reservation. And it’s hard, the battle to wake up your own community, to tell people water is life.

When you fight for the water, and you find that you’re on the right path, the water will always bring you back to that circle, it will always make an impact on you. So with the mní wičhóni, it was an awful thing to see what was happening to brothers and sisters out there. It was awful to see what was going on in the media. It could break your heart. And I know the sacrifice of it, too, in my own community.

The greatest thing that I know as Oak Flat spiritual fight is I can pray, because right now our springs, our aquifers, they are at risk. A copper mine, they want to get that little amount of copper, when water is so valuable, you can never repair that damage. Just like my sister was saying here, it’s your veins. You have to look at it like that, what you put in your own bodies and what we’re doing to the Earth. You put something in your body that’s not meant to be, it will destroy that vein, and it’s the same for the rivers and the streams and the oceans and the lakes here. If you understand that, you’ll see the damage that we’re doing to the Mother Earth.

When you find that yourself, to step out of being selfish, you’ll realize that there’s just so much to pray for and so much to be grateful for, and to continue to pray.

CLAYTON: Let’s continue to support each other in a good way, and let’s continue to build that reverence collectively about our sacred elements that keep all life going. We’ve got to protect water. Enjoy the rest of the conference. Thank you.