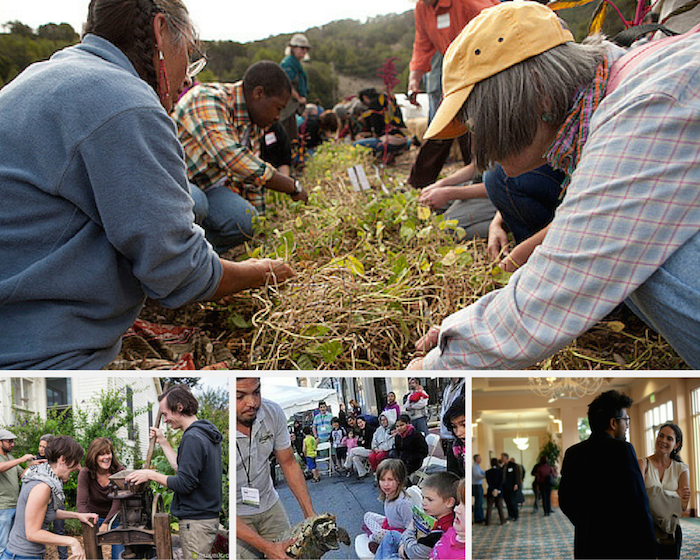 It’s no accident that natural systems are built around community – and, similarly, human communities are the bedrock building block of society. How we imagine, build and live in our communities may well be some of the most important decisions we make as a society.

At Bioneers 2015, we invite you to explore our Resilient Communities programming in keynotes and afternoon panels and workshops, as well as a landmark one-day pre-conference intensive. We will cover a kaleidoscopic palette of solutions, issues and themes including California’s Game-Changing Climate Leadership Model, The Nature of Cities, Culture & Community, Resilient Food Systems, Eco-Governance Models, Democratizing Technology, and more.

[blockquote align=”center”]”The basis of our biology is community.” —Paul Stamets[/blockquote]

As the world looks towards the COP 21 Paris Climate Conference in December 2015, the question on everyone’s mind is whether the world’s nation states will be able to cobble together a climate deal after years of gridlock and missed chances. Regardless of the outcome, real, viable and encouraging action continues to swell across multiple scales below the nation state level. States, regions, cities, and citizen groups are rapidly developing collaborative networks and frameworks to take significant policy action on climate change.

Join us on Thursday, October 15, for a deep dive one-day forum on California’s Game-Changing Climate Leadership Model, which puts Environmental Justice policies front and center. This landmark gathering will feature visionary players in this hopeful new wave of global climate politics including former State Senator Tom Hayden, Vien Truong of the Greenlining Institute, Holland’s acclaimed water expert Henk Ovink and many others. Tom Hayden will keynote the full conference on Friday October 16th on this topic.

The Nature of Cities

We’re now a decade-and-a-half into the first century in history with a majority of the human population living in urban environments. At Bioneers 2015, we’ll be diving into the nature of cities, literally. Joining us will be two of the world’s most innovative urban thinkers and doers, both global leaders in re-designing cities at scale using nature’s model as the blueprint.

At Bioneers 2015, we examine models of thriving, diverse communities. What’s working, why is it working, what can we learn and apply elsewhere?

At Bioneers this year, we’re featuring incredibly important conversations about food and community. Dive into the past, present and future of “Cuba and Sustainable Agriculture” with Greg Watson and Kevin Danaher. Witness the power of increasing access to healthy food to build and restore individuals and communities during Healing Foods, Healthy Communities. And lots more!

For all the talk about the democratizing power of technology, too often communities find themselves left out of the conversations and decisions that really matter. We’ll be featuring two leading lights in the movement to leverage open-source technology for community empowerment. Citizen science is so powerful that three states have outlawed it.