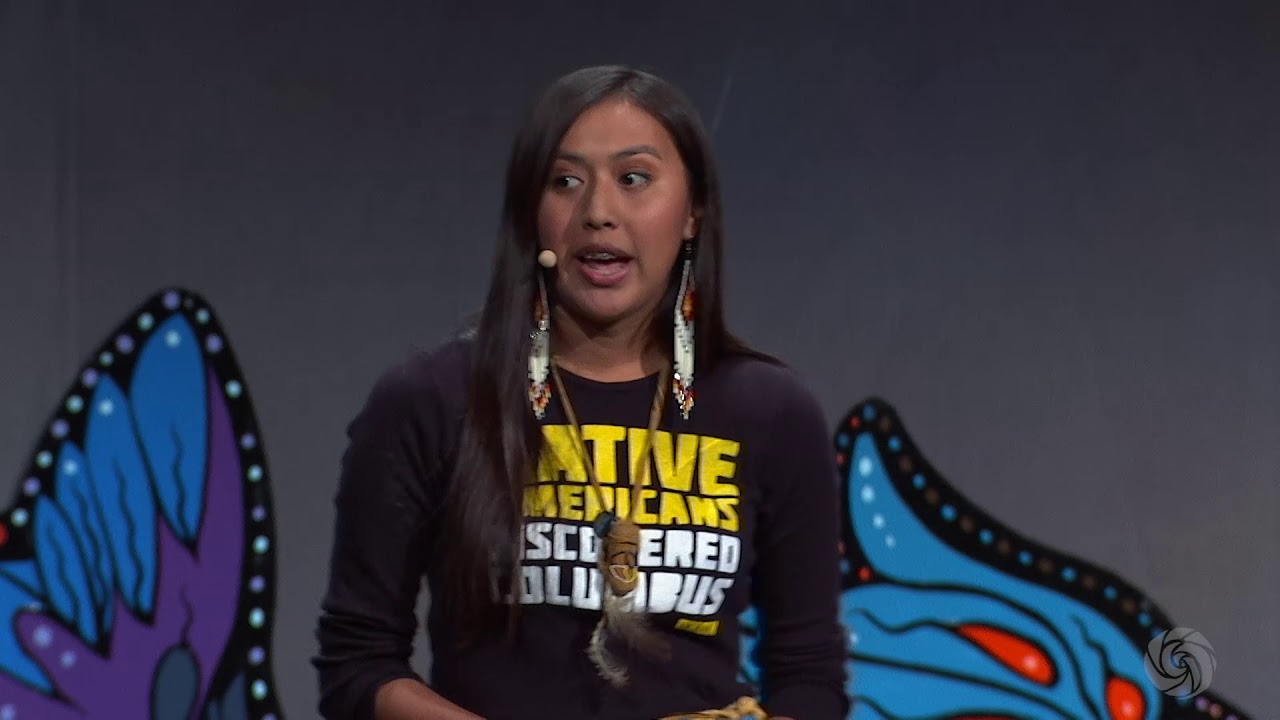 “It can be difficult, especially for young people, to find positive and regenerative examples of people resisting and overcoming such challenging circumstances,” wrote Bioneers’ Ernesto Reyes in a 2017 blog post. “There are, however, examples of youth who are leading the charge toward justice, inclusivity, empowerment, and the right to simply be recognized. Naelyn Pike is one shining example.”

Naelyn Pike (Chiricahua Apache), is a 17-year-old high school senior from San Carlos, Arizona. Passionate about her culture, identity, and tribal sovereignty, Pike has become an internationally renowned Indigenous Rights and environmental leader. She co-leads (with her grandfather Wedsler Nosie Sr. and mother, Vanessa Nosie) the Apache Stronghold, which is fighting to stop a mining project that would desecrate Oak Flat, an Apache sacred site.

At Bioneers 2017, Pike addressed a keynote explaining why young people must take up the fight against racial and environmental injustice. Watch her impassioned presentation and read excerpts from the transcript below.

Hello, my name is Naelyn Pike. I am enrolled in the San Carlos Apache tribe, but I’m Chiricahua Apache.

I’m going to tell you my story and where I come from and who I am. I’m fighting to protect our sacred lands. Those lands are my homes. Those lands are who I am and where I come from. The place where I can feel free, as being Nde, as being Apache. That was taken away from me and the generations before me. That freedom to believe in anything, that freedom to be who we are, that freedom to pray, to sing the songs, to live on the land and to be who we are. That right was taken away.

And that’s what I’m fighting against. That’s what we’re doing here today. That’s what this generation is doing here today — we’re fighting against these dirty politicians and these corporations that want to desecrate our sacred land, that want to desecrate who we are and strip our identity away. That’s the generational fight. My great grandmother was told she couldn’t be who she was, and she was stripped of her identity because that was “savage.” “Kill the Indian, save the man.”

My grandfather grew up fighting and contemplating the idea of why someone would want to take away who he was. And my mom stood behind him. And now it’s my turn to stand up too. It’s my turn to take on this fight and to understand and to teach my little sisters, my little cousins, to teach my future children that who we are is powerful, is resilient, is strong, because we are a beautiful people.

We have the right to go back to these places because San Carlos is where we were placed as prisoners of war after the Apache wars in the 1800s. That’s not my home. It’s a place called “Hell 40 Acres” because it was a place where no human beings could live. That’s why I’m fighting for my home, Oak Flat and Mount Graham, because those places — you can be born there, you can live there, take the medicinal plants, eat the food and drink the water, and be free, and live that essence of life of who we are, that God-given gift our creator has given us. They want to destroy that. A block cave mining corporation wants to destroy that land — wants to take it and use the money and put it in their pockets.

But I’m saying no! And many people, millions of people in this world, are saying no! We have so many sacred lands that are going to be desecrated, so many fights to protect Chaco Canyon, to protect Bears Ears, to protect Indigenous land, food, water, the right to live, our identity. We’re fighting against so many pipelines. And the thing is that these generations behind us had told us this prophecy.

But there’s another prophecy: That the youth is going to stand. And that’s us today. That’s us here and now.

I cannot let this world be gone, and I cannot be a bystander because I’m afraid or I don’t want to talk about the truth or I don’t understand. In order to create change and make change for the people, we must unify. True unity is accepting one another’s diversity, because each and every one of you in this room is beautiful. We all have a story. I have my own story. My mom has her story. But as long as we understand each other’s stories and we accept that beautiful diversity in all people, because we are human beings in this world, the one thing we can understand is that we all have one issue on which we can relate. And that’s that we need to protect this Earth.

It is up to us to make that stand now, here, today — to stand up and take that path because you can stand up, but it’s if you walk it every single day of your life. If you walk that life, if you take that action. After this conference, that’s what is important: what you’re going to do next. You may go to all these vendors and you may go and look at the panels and you may watch me now, but it’s what is in your heart, that fire lit inside you, and that fire is rising in the youth. You can feel it. You can feel it in the ground. You can hear it in the trees. You can feel it in the air as you breathe it. Because this change is here and now and it’s up to you to make that change too. To stand with us because it is important that we unify. It is important that we help and support one another. It is important that we protect this Earth and our right to be human being and believe in anything that we want to believe in. It’s up to us here and now. It’s up to you.