Nation Undivided: Growth Happens When We Accept Our Differences and Find Shared Values 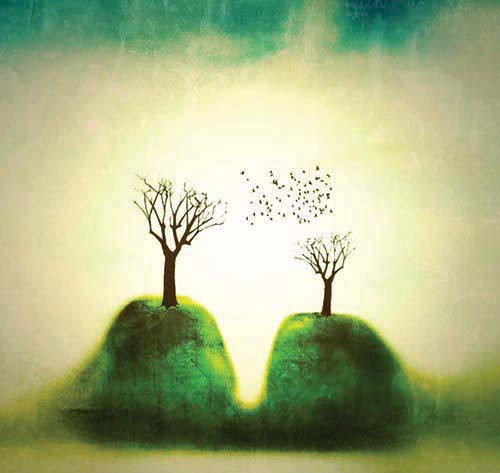 This article was published in B the Change, which exists to inform and inspire people who have a passion for using business as a force for good in the world.

Every business has the potential to create shared prosperity among diverse groups of people, which brings us closer together and creates mutual benefit. We find friends, mentors, sometimes life partners. Business can be a powerful builder of community.

Our business friendships form a human panorama of diverse ages, cultures, nationalities, beliefs and orientations. Most of my friendships came to me through business. Our work gave us something to collaborate on, and in the process we grew close. I think that’s beautiful.

That is likely not the sentiment you’ll gather from reading the news. Politicians and much of the news media are dividing communities to create power. Even conscientious politicians. Even the most prestigious news outlets. They are driving us apart by defining us as separate and appealing to us as partisans. They define an audience, then they attempt to build loyalty by adopting that audience’s perspective, even when the perspective is prejudiced.

A case in point was The New York Times’ December story headlined “An Oklahoma Newspaper Endorsed Clinton. It Hasn’t Been Forgiven.” The story was synopsized in a tagline: “An editorial in Enid opposing Donald J. Trump brought a spate of canceled subscriptions and pulled ads, showing the raw power of partisanship in small-town America.”

Then, in the sixth paragraph, the reporter describes the extent of the damage: 162 subscribers, out of 10,000, canceled their subscriptions. Eleven advertisers pulled ads. Someone pasted a “Crooked Hillary” sticker on the newspaper’s doors.

The Enid News & Eagle in Enid, Oklahoma, is a resolutely conservative newspaper serving a conservative city in a deeply conservative state in the heart of one of the nation’s most conservative regions. It apparently had never endorsed a Democrat until this year. When it endorsed Hillary Clinton, only 1.62 percent of its readers canceled subscriptions. Only one of the 11 disgruntled advertisers was apparently of any significance to the paper’s revenue.

The “raw power of partisanship?” Hardly. The more significant and accurate story might have been headlined, “Citizens of Conservative Stronghold Reveal Tolerance and Broad-Mindedness.” But tolerance and broad-mindedness are not virtues promoted by today’s news media.

Could that be because those media hope to benefit from “the raw power of partisanship?”

Convince people that they are threatened by powerful and devious forces (screenwriters, homosexuals, longshoremen). Mark those sinister forces as fundamentally different. Then pursue your own agenda by pitching it against the dangerous “Other.”

Diverse and powerful news media — from Fox News to The New York Times — have adopted essentially the same approach for securing attention and loyalty. Stories focus on conflict, which generates interest but divides society. Expert opinions come from politicians and pundits who build power bases by sowing suspicion and alienation.

The Enid story spent days on the “Trending” list, probably because it reinforced a typical Times reader’s stereotype of small-town America as ruled by angry reactionaries. And, of course, the pundits of Fox News hammer away at the “liberal elites” and “illegal immigrants” who are destroying our culture, denunciations that make their way into coffee klatches and dinner parties across rural America where few undocumented workers, liberals or elites are likely to be present to defend themselves. The news media are winding us up by appealing to our tribal prejudices.

There are more wholesome ways to build an audience, and a business. Mother Earth News (which I previously ran) is the world’s largest media brand focused on sustainability. Our readers, according to independent research, were twice as likely as the average American to say they were politically “very liberal.” And they were also twice as likely to say they were “very conservative.”

About 9 percent of the readers were “very liberal” and almost 21 percent were “very conservative.”

Evidently, conscientiousness appeals to people at both ends of the political spectrum. Clean air and clean water are, it turns out, not divisive concepts.

We examined the ways we had reacted to our own research data over the previous decade. We had eliminated cultural buzzwords, like “green,” from our coverage because they seemed to depress engagement. We learned that we could draw people to explore almost any environmental or social problem if we included a solution near the top of the story — specifically a personal solution like driving a hybrid car or installing home solar panels.

The realization that we had grown a pretty big media audience by unifying, rather than dividing, diverse people was, well, thrilling. Even more thrilling was the fact that they were brought together by their desire to do the right thing.

The local paper, in Enid, Oklahoma, or wherever, serves an audience that shares a large set of basic concerns — economic prosperity, physical security, social harmony, the weather. So it’s not surprising that 98.4 percent of Enid’s newspaper subscribers are loyal to the News & Eagle. Many of them surely disagree, but disagreement doesn’t automatically constitute disrespect. Nor does it negate mutual interest. On the local scale, that’s obvious.

Businesses that intentionally focus on building healthy communities, creating shared prosperity and protecting shared assets like a clean environment create what is possibly the most profoundly unifying force in our society. Like clean air and clean water, good business is not controversial. And every day billions of people all over the world come together to do business.