Almost 30 years ago, seven organic farmers from the U.S. Midwest, unhappy with the state of American agriculture, decided to band together and form a cooperative to continue farming sustainably. Today, the Organic Valley agricultural cooperative, headquartered in La Farge, Wisconsin, is made up of over 2,000 farmers in 36 states. And the cooperative just became part of a unique community-solar partnership that will allow it to become the largest food company in the world to source 100 percent of its electricity from renewable energy.

Renewable energy is not new to Organic Valley. In 2012, the company invested in the installation of a 5 megawatt (MW) wind farm next to its distribution center in Cashton, Wisconsin. Organic Valley also has rooftop solar arrays on many of its buildings. However, with the growth of the company over the past few years, these installations only covered about 50 percent of its energy needs. To get to 100 percent, Organic Valley initially set out to build a 1 to 5 MW solar array with a power purchase agreement (PPA) as a pilot project. However, Wisconsin is a regulated market, making a PPA more difficult. According to Stanley Minnick, energy services manager at Organic Valley, “Once we realized how difficult it would be to have a direct power purchase agreement, we knew we would need to scale up and partner with more communities to achieve our goal. It was important for us to see new installations near our facilities and many of our farmers in the Midwest.”

That’s when the company reached out to OneEnergy Renewables, a developer of community- and utility-scale solar energy projects and a member of Rocky Mountain Institute’s Business Renewables Center. “Since Wisconsin is a regulated utility market, it became pretty clear early on that this was going to need to be a creative partnership,” said Eric Udelhofen, director of Midwest development at OneEnergy. So, OneEnergy started outreach to the Upper Midwest Municipal Energy Group (UMMEG)—a municipal joint action agency that provides a range of services to its 15 municipal members in Wisconsin, Iowa, and Minnesota—and the three companies created a community solar partnership. The Organic Valley–UMMEG partnership will develop roughly 12 MW of solar for Organic Valley facilities, and will support the addition of more solar in other nearby communities, bringing the total of new solar installations to about 29 MW. Not only will it allow Organic Valley to reach its 100 percent renewably powered goal, but it will also increase solar energy use in the state by 15 percent.

OneEnergy located the project sites within Organic Valley’s member communities, all of which are within 100 miles of their Cashton facilities. By working with its local utilities in a community solar approach, Organic Valley fulfilled its 100 percent commitment with 12 MW of solar projects, and the partnership has allowed for 17 MW of additional solar to be built out—the equivalent of powering roughly 3,000 homes.

It took only 13 months to get all the systems under contract. OneEnergy had such success in garnering local support so quickly because of the trust between the communities and the local business. According to Rachit Kansal, an associate in RMI’s Business Renewables Center, “Organic Valley is a grassroots organization, with deep roots in the local community. This gives them a significant amount of trust and thus, when they brought something to the table that they thought would benefit the community, the community listened.”

Organic Valley has agreed to purchase all the renewable energy certificates (RECs) from those systems for the life of the projects. “We’re not just doing a year-to-year contract,” according to Minnick. “We’re making a long-term commitment.” UMMEG has a 25-year power purchase agreement with the project, and Organic Valley will continue to buy electricity from the utilities as it has in the past. 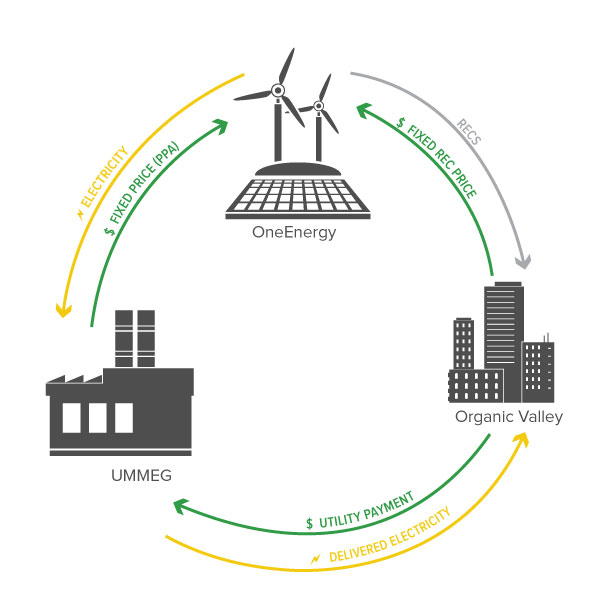 This unique partnership is bringing benefits beyond clean energy to the local communities. “The rural communities in which the projects will be located are not only hedging against a rise in energy prices, but will see utility bill savings from day one,” says Udelhofen.

The projects also create economic activity and show a commitment to sustainability. “These communities like the idea of attracting young people and appealing to the next generation of folks who are thinking about where their energy and food come from,” says Minnick. “The communities look to these projects and hope they’ll bring in more people who want to call these rural towns home.”

The fact that the arrays are smaller and spread out throughout different communities in which Organic Valley members farm is important on many levels. “Community-scale solar is the right size for municipal utilities that want to capture the benefits of local solar on their distribution grids where interconnection capacity is limited,” according to Joseph Goodman, manager of RMI’s Shine™ community-scale solar program. “Such small utilities often operate electric grids in rural areas where community-scale solar can now provide economic value and enhance resiliency while meeting member demand.”

Jonathan Reinbold, head of sustainability at Organic Valley, stresses the importance of the local aspect of the solar projects. “Organic Valley is catalyzing new solar in the region. We’re fulfilling the expectations that our consumers have in sustainable energy and food production. It’s not only good for us and our consumers, but also good for the communities, good for the residents, and good for the utilities.”

Organic Valley’s commitment to animals and the planet also led them to adopt pollinator-friendly solar standards. Just this year, the bumblebee was declared an endangered species. To combat the bumblebee decline, Minnesota became the first state to establish a solar standard that encourages developers to plant wildflowers and native plants next to the solar arrays to make them more appealing to pollinators. The flowering plants and grasses next to the solar arrays producing electricity for Organic Valley will create as much bee and butterfly habitat as if 30,000 families were to each plant six-by-twelve-foot pollinator gardens. “By providing pollinator-friendly habitat with our solar arrays we’re taking local to the next level,” says Bill Eddie, CEO of OneEnergy.

The partnership between the customer (Organic Valley), a project developer (OneEnergy), and the utilities themselves (UMMEG) was key to helping Organic Valley reach its 100 percent renewable electricity goal. “This is a great example of what can be done when a large customer works closely with its utility to complete its goals,” says Eddie. “Instead of going around their utility through onsite projects or large complicated wholesale transactions, more businesses are trying to figure out what they can do with their local utilities, and municipal utilities have more latitude in what they can do to meet customer demands.”

Minnick agrees and believes they are lucky to work with such forward-thinking utilities. “The municipal utilities in Wisconsin have a lot of flexibility that an investor-owned utility does not. At the end of the day, they’re always going to be looking out for their customers. Municipal utilities should look at this not just as a feel-good story, but also as a way to save money for their rate payers and constituents.”