Protesting corporations does have an impact — here’s how! 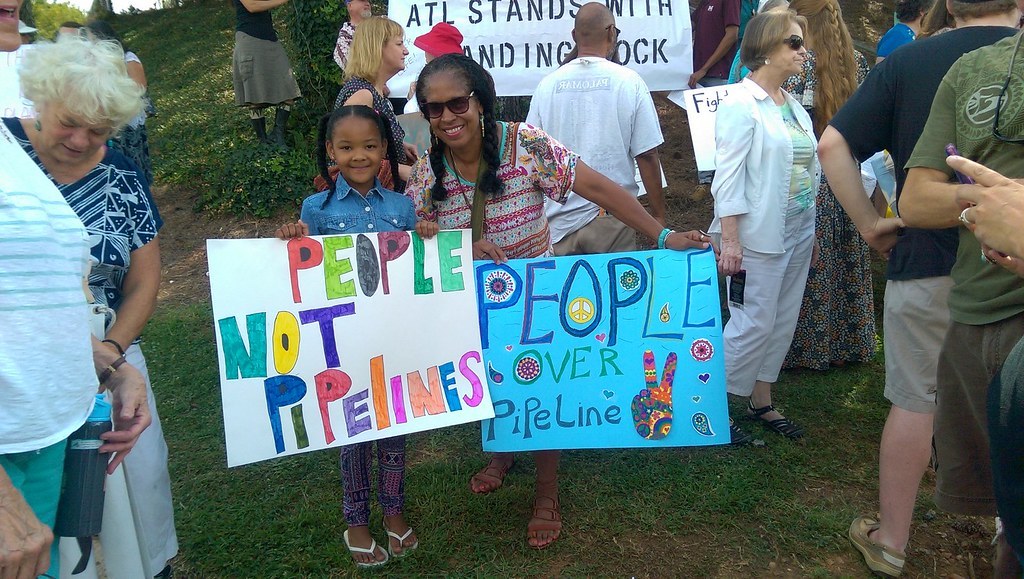 This article is reposted with permission from Women’s Media Center.

Jane Fonda’s final Washington, D.C. Fire Drill Friday was a huge success, with a crowd that grew from the first gathering of about 40 people to several hundred activists, citizens, youth, elders, families, celebrities, and community leaders from all over the country protesting the lack of action on climate change. Thanks to Jane and her friends’ star power, the Fire Drill Fridays civil disobedience captured extensive news coverage, from Facebook and Twitter to The Washington Post. But most of our local protests don’t have this kind of media draw, so people may wonder: What difference does civil disobedience make?

At a time in this country when our social institutions are failing us, politicians are spineless, our elections are rigged, and our government has been bought by big business, people are showing up en masse to protest this corruption. Civil disobedience is on the rise, and whether or not our leaders are listening, the market is. It is not the episodic call for consumer boycotts that has the financial markets’ attention, but a fundamental shift in the material risk a company faces when it does not have the social license to operate.

Social license and social risk are the terms the financial markets use to describe the social conflicts — protests, demonstrations, boycotts, and civil disobedience — that occur when people organize to get their voices heard. Social license is what we give companies when their operations improve our welfare and the well-being of our communities. Social risk is what a company incurs when people no longer see a benefit or actually see harm in what the company does. Material risk, whether it is legal, technical, social, or environmental, means the risk is so significant it will damage profits or the financial viability of the company. Once a risk becomes material, it must be reported to the Securities and Exchange Commission (SEC), it must be disclosed to investors, and it sets the cost of capital. Whether you are a company or individual, the cost of capital is what you pay to use or borrow someone’s money. The ability to repay the money is what drives the interest rate. So the cost of capital should go up if you or the project is risky; less risk means lower interest.

Over the past three decades, investment practices have been shifting as more and more focus is given to companies’ impact on long-term sustainability and companies’ generation of positive social and environmental impact. This trend is called ESG investing — where environment, social impact, and governance are three pillars of analysis that are applied to companies in addition to profit. Social performance includes concerns such as equal pay, diversity, CEO pay, human rights, and community engagement. In 1998, ESG funds totaled $639 billion AUM (assets under management). By 2018, the AUM total was over $12 trillion, meaning that $1 in every $4 invested is in ESG management.

In August of 2016 I was asked by the Standing Rock Sioux Tribe to lead their investor engagement strategy for the protests against the Dakota Access Pipeline (DAPL), a project being developed by Energy Transfer Partners. While DAPL put social risk on the financial community’s radar, it also put the power of social media front and center in today’s civil society.

EFFECTIVE SOCIAL MEDIA: In 2013, the share of Americans who received their news on a mobile device was 54%. In 2018 it was 72%. Community organizing and networking can be seen keeping pace. In 2015, the First Nations in Canada launched protests against the large-scale extractive projects that were being conducted on their lands. At that time, their website, Idle No More, had 300,000 hits in five days. When the Standing Rock Sioux Tribe launched its protest against the Dakota Access Pipeline, the tribal website had over 1.5 million hits in two weeks. This did not include hits for protest partners such as Stop Fossil Fuels, 350.org, Break Mega Banks, or the freestanding DAPL website. The power of social media is growing. It was the organizing force behind the #NoDAPL Day of Action, coordinating 500 NGOs and 300 events across all 50 states and numerous international cities including Kyoto, London, Sydney, Paris, and Marrakesh.

SOCIAL COSTS, MATERIAL LOSS: On June 23, 2017, a Yahoo Finance headline read, “Avoid Energy Transfer Partners (ETP) Stock Until This Is Resolved.” The accompanying article said: “ETP stock is down more than 60% since its 2014 highs, less because of oil’s pullback, and more because of the rhetoric associated with the Dakota Access pipeline.” First Peoples Worldwide Investor Engagement Center, a collaboration between Leeds Business School and the American Indian Law Clinic at the University of Colorado, conducted an event study to track ETP stock over the course of the protests. Not only did ETP stock lose 60% of its value, which it still has not recovered, but the event study found that ETP lost an additional $7.5 billion on the DAPL project. One investor sued and other investors with a combined worth of $1.7 trillion in AUM signed statements demanding full disclosure of social risk and social costs.

No other event in the 21st century has done more to demonstrate how social risk can become material risk than DAPL. Material ESG factors should be factored into pricing securities, and bank lending should take into account the higher probability of lower and more variable returns. ETP was not alone in its failure to recognize the social risk inherent with the DAPL project. The 17 banks that were financing DAPL lost over $4.4 billion in account closures, causing three of the banks — BNP, DNB, and ING — to pull their loans.

The kind of detailed research that was done on DAPL is not the norm. We need investors to more routinely have access to much better ESG data like the research done on DAPL. However, there is growing evidence that social risk has concreate implications for the value of companies. From the hundreds or thousands of local protests to the sites of major social conflict, the aggregate impact of social risk is becoming material:

As we see today, when a government fails to uphold the rule of law, or inadequately regulates corporations in the first place, when benefits accrue to only a few, when people are disenfranchised from decisions that impact their lives — there is something you can do about it: Protest, protest, protest.

This article is reposted with permission from Women’s Media Center.