Reflecting on the 400 Year Anniversary of “the First Thanksgiving” 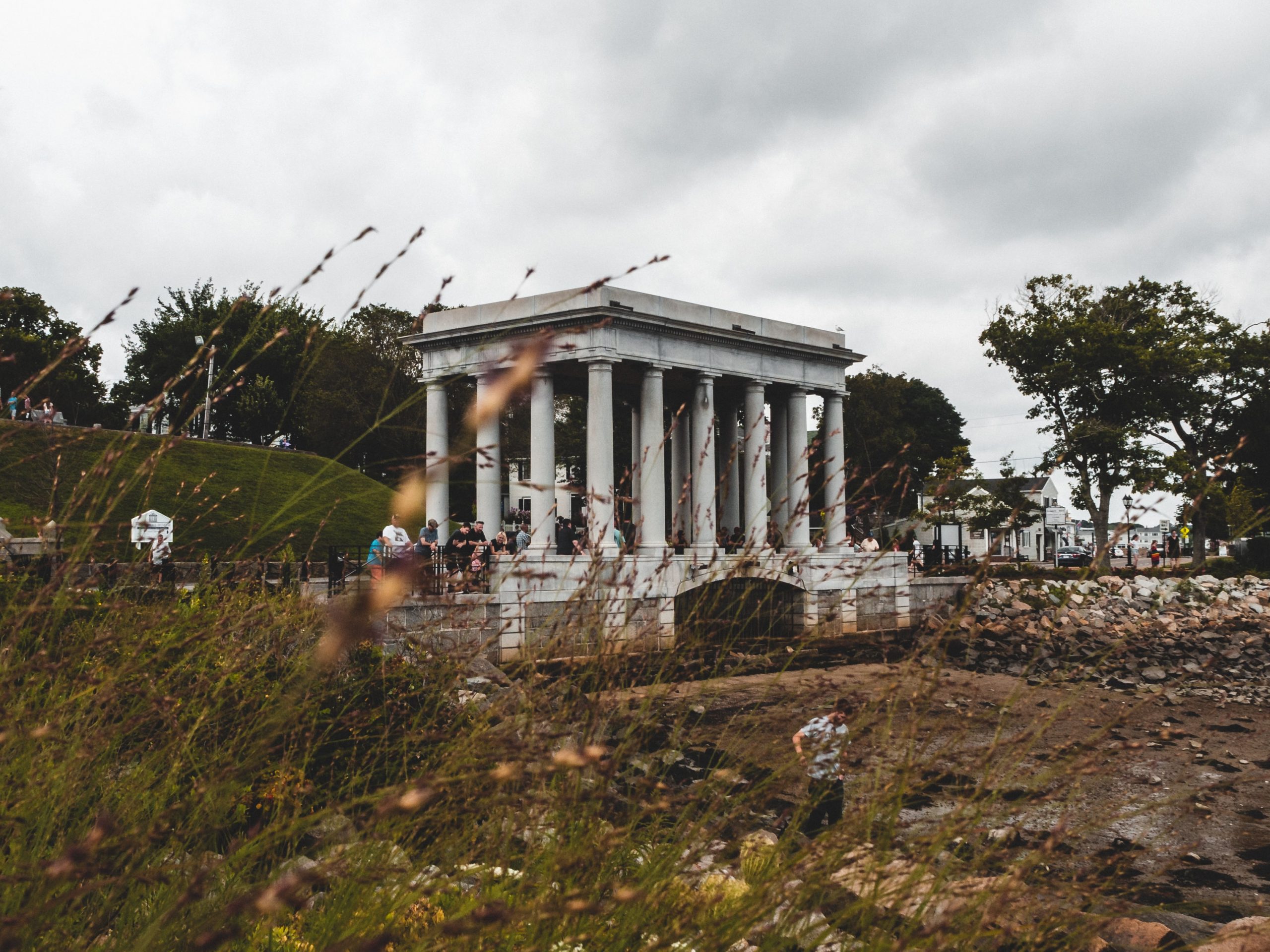 This piece is written by Alexis Bunten, Co-Director of the Bioneers Indigeneity Program and guest author Tony Perry, Citizen of the Chickasaw Nation and author of Chula the Fox (Chickasaw Press).

Four hundred years ago, British settlers celebrated their first harvest, made possible through the generosity of the Wampanoag people. Tony and I wanted to truly understand the Thanksgiving holiday from the place where it all happened, so we traveled to Massachusetts to commemorate the day and see for ourselves.

As Native Americans, we have a  complex relationship with the holiday. The story that most Americans learn growing up evolved from a myth born at the height of the Civil War. The idea of “Pilgrims” and “Indians” celebrating the harvest together symbolized American unity, but their unity came at the cost of erasing the heavy and sustained price that Native peoples paid. And it erases the fact that Native peoples have endured over 400 years of systematic genocide and forced assimilation, including massacres, “gifts” of smallpox-infested blankets, and boarding schools created to “kill the Indian, and save the man.”

This problematic relationship makes it difficult to embrace the myth. For this reason, Alexis Bunten (Yup’ik and Unangan) initiated a series of events and a campaign to provide Americans with knowledge and strategies to decolonize (and re-indigenize) Thanksgiving. Inspired by this campaign, Tony Perry, a Chickasaw author, envisioned retelling the story, creating a new, more accurate, and inclusive narrative that would ultimately replace this myth altogether. We shared our vision with Danielle Greendeer, a Mashpee Wampanoag citizen and food sovereignty leader, and she agreed to join us as our lead author. A few months later, Keepunumuk: Weeâchumun’s Thanksgiving Story was born.

Keepunumuk retells historical events through the eyes of the native plants that saved the Pilgrims—namely,  the ‘three sisters’:  corn, beans, and squash. This story rests on the historical record and Native ways of knowing and being in the world, leaving readers with an emphasis of gratitude for the world around them. Garry Meeches Sr (Anishinaabe) brought the story to life with heart-warming illustrations. We want Keepunumuk to become the default “first story” that American children will hear about the “first Thanksgiving.” At the same time, Keepunumuk will raise questions for their parents and support broader conversations around our nation’s birth as well as themes including mutual aid and traditional ecological knowledge.

The day before Thanksgiving, we visited Plimouth Pautuxet Museums. Given its storied history, we expected to join swarms of Americans in Plymouth to mark the 400th anniversary of the first Thanksgiving. With the critical acclaim and reach of the 1619 Project to bring critical awareness to the American institution of slavery, we imagined that 2021 would be a critical opportunity to reach millions of Americans with the true story of Thanksgiving.

That didn’t happen. Important sites, such as the Mayflower II—an exact replica of the ship that took the Pilgrims (and other settlers) to their new home—and the Plimoth-Patuxet Museum—which offers a recreation recreated period Wampanoag and English communities—were largely quiet.

Other families were present, but we had no problem getting anywhere or seeing what we wanted. It was an educational and productive visit, and an experience we will long remember. From reading primary sources left behind by the Pilgrims, we knew that upon arrival, the Pilgrims robbed Wampanoag winter caches of corn and beans. So, Tony and I were shocked to learn from multiple interpreters that the Pilgrims were not starving, as is typically told in the “traditional” story American children learn. Nearly half the Pilgrims died of exposure to the cold—not starvation. It turns out that they had plenty of food to last their long first winter. To us, it made the act of stealing the Wampanoags’ winter food store a far worse reflection of the Pilgrims’ moral character!

For us, the question remains:  Why was it so quiet?  This runs deeper than near-empty car parks at historic sites. Thanksgiving itself received little attention in the media, beyond a few stories—such as this one that questioned the historical narrative and even a couple of dinosaurs, such as the Wall Street Journal and Breitbart that defended the myth. Of course, being in our second year of the pandemic explains part of it, but we don’t believe this lack of interest in the 400 year anniversary of Thanksgiving is due to COVID, especially given that Thanksgiving 2021 brought the highest air travel numbers in the US since early 2020.

We believe it’s more than that. Fundamentally, it’s clear that the traditional narrative has lost its resonance with the wider American public. Stories of “Pilgrims” and “Indians” persisted no doubt, but they were muffled by family gatherings, turkey feasts, and the chance to pause increasingly fast-paced lives. Due to growing awareness of the racism underlying tragic police shootings of Black Americans and uninvestigated murders of Native Americans (MMIW), Americans aren’t putting up with whitewashed and “idealized” histories of our country. Americans deserve and want to know the truth about our country’s origins and history. Keepunumuk offers this to the youngest readers at the start of their learning about our history by exposing them to a Native perspective that doesn’t center Pilgrims or the Wampanoag for that matter but invites readers to reflect upon our gratitude for the plants and animals that make our lives possible.

On Thanksgiving Day, Danielle, Tony, and I attended the 51st “National Day of Mourning” with over 1,000 people concerned about the effects of “Thanksgiving” and its aftermath on Native peoples. Taking place on Cole’s Hill, overlooking “Plymouth rock,” and organized by the United American Indians of New England (UAINE), the event included prayers, speeches, and a march through downtown Plymouth. Although the event was somber, it filled our hearts to see so many diverse Natives and allies in the huge crowd, which was reported as the biggest crowd the event had ever hosted.  This was doubtlessly a response to Americans’ growing desire to acknowledge and redress the theft, genocide, and slavery that built so much wealth for white settlers and their descendants.

Indigenous speakers from across the Americas spoke about various pressing issues facing Native peoples, and all peoples. We were particularly taken with the lead speaker, Kisha James, a member of the Aquinnah Wampanoag and Oglala Lakota tribes and granddaughter of Wamsutta Frank James, an Aquinnah Wampanoag leader and activist whose 1970 speech denigrating the whitewashed celebration of the 350 year anniversary of the Pilgrims’ arrival to Wampanoag land was rejected and suppressed by the event organizers.

We were moved to tears of outrage at the injustice the US government continues to impose on men of color through the prison industrial complex when one of the participants read a message to the National Day of Mourning from Leonard Peltier, who is not receiving adequate medical attention in Federal Prison, for a crime of which there is no evidence he committed. We heard firsthand from speakers from tribal lands across the US that are threatened by natural resource extraction, pipelines, and pollution. We listened to an update about the current situation with the Houma people who are still suffering unbelievable, long-term losses in the wake of Hurricane Ida. The event closed as the march came to an end with the crowd gathering to hear a final speech about the MMIW crisis that brought us to tears again.

After the event, Danielle and her husband cooked us an Indigenous Thanksgiving feast in Mashpee, the Mashpee Wampanoag tribe’s hometown. We ate all native foods –duck, turkey, wild rice, squash, mushrooms, succotash, and greens, much of which was grown by Danielle. (By the way, earlier in the week, the New York Times published a beautiful piece on Danielle’s work in the food sovereignty movement, including the story about how she revived the planting of the traditional Wampanoag heirloom corn species.)

As we ate, we realized that most Americans probably don’t know the name of the tribe that taught the Pilgrims how to plant and fertilize the three sisters and that they may even think of the tribe that helped the Pilgrims as “of the past,” or even “extinct” true to the stereotypes that are circulated in schools and popular media. And yet here is a resilient, vibrant, and thriving tribal community that has never stopped living on their ancestral territory and practicing their culture.

Our country is again deeply divided, and it’s time for a new narrative based on both the complexities of history and the hope of a brighter, more equal future.  For us, this is the story that needs to be told for Thanksgiving —that, despite 400 years of genocide, the Wampanoag, and Native Americans in general, are here to stay. Practicing our cultures heals us from the ongoing trauma of colonization, and appropriately sharing our cultures with others can help all Americans to recognize the truth of our history of our country’s birth and begin to heal together. This will help us create a new story built on history that also reflects the inclusive society we aspire for.