As Long as Grass Grows: The Indigenous Fight for Environmental Justice 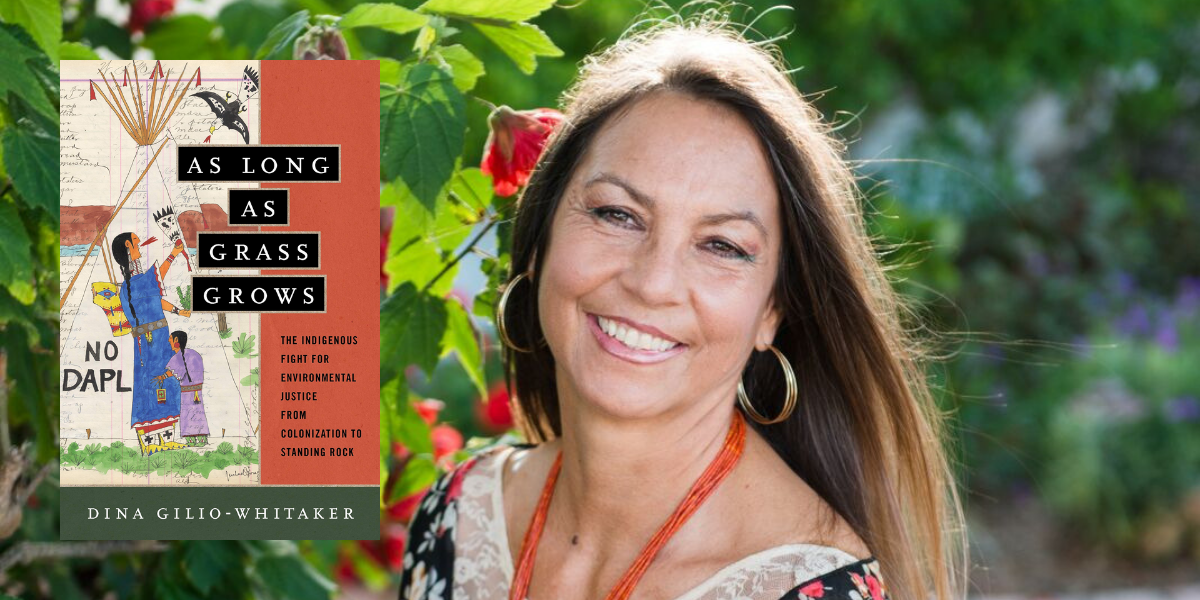 Through the unique lens of “Indigenized environmental justice,” Indigenous researcher and activist Dina Gilio-Whitaker (Colville Confederated Tribes) explores the fraught history of treaty violations, struggles for food and water security, and protection of sacred sites, while highlighting the important leadership of Indigenous women in this centuries-long struggle in her book As Long as Grass Grows (Beacon Press, 2019). The book gives readers an accessible history of Indigenous resistance to government and corporate incursions on their lands and offers new approaches to environmental justice activism and policy. Gilio-Whitaker is an independent consultant and educator on environmental justice and other Indigenous policy-related issues. She teaches American Indian Studies at California State University San Marcos

Following is an excerpt from As Long as Grass Grows.

The Concept of the Sacred

The very thing that distinguishes Indigenous peoples from settler societies is their unbroken connection to ancestral homelands. Their cultures and identities are linked to their original places in ways that define them, as reflected through language, place names, and cosmology or religion. In Indigenous worldviews, there is no separation between people and land, between people and other life forms, or between people and their ancient ancestors whose bones are infused in the land they inhabit. All things in nature contain spirit (specific types of consciousness), thus the world is seen and experienced in spiritual terms.

As many scholars have noted, the Indigenous world is a world of relationships built on reciprocity, respect, and responsibility, not just between humans but also extending to the entire natural world. Indigenous relationships with nature have been stereotyped and appropriated by dominant society in a multitude of ways (such as the ecological Indian), but in reality are rooted in a philosophical paradigm very different from that of dominant Western society. Native scholars argue that the difference between Indigenous conceptions of the sacred and Western conceptions are their different orientations to time and space.

Vine Deloria Jr., in particular, first articulated these ideas in his pioneering book God Is Red: A Native View of Religion (1973), and later built upon them in his theoretically dense The Metaphysics of Modern Existence (1979). In both works Deloria presents fundamental challenges to the Newtonian-Cartesian view of a mechanistic, linear universe. Identifying Western paradigms and drawing on Deloria, Osage theologian George Tinker observes that centuries ago Europeans adopted a perceptual orientation based on temporality. Time, as the primary organizing intellectual principle to which a spatial orientation is secondary, creates a linear and unidimensional world in which human existence is perceived as motion through space, which is cast as the past, present, and future.

An orientation that favors time over space in which the world is perceived in terms of progress based on forward motion naturally results in systems of hierarchy. Hierarchies of knowledge and life forms (evolution; concepts of superiority and inferiority), for example, make it possible for a paradigm of domination to become a guiding principle in a society. The sacred is also perceived in terms of history; places are sacred because of the events associated with them and contained within time. For instance, for Christians, Jews, and Muslims, Deloria argues, particular sites in the Holy Land are sacred primarily because of their historical significance more than a sense of rootedness in them, as is true in Native American cultures.

For Indigenous peoples, a spatial orientation emphasizes human linkages with place, and all the elements of that place, spanning time. These connections are reflected by and infused in all aspects of Native life, including identity, culture, and ceremonial cycles, as people recognize themselves as having been placed there by spiritual forces to which they are responsible. But this responsibility is a two-way street, and the elements of those places are seen to be responsible to the people as well; this reciprocal relationship forms a sense of kinship with the land itself. The emotional bonds of people to place reflects an egalitarianism that does not distinguish hierarchies of importance, and as Tinker observes, “humans lose their status of ‘primacy’ and ‘dominion.’ . . . American Indians are driven by their culture and spirituality to recognize the personhood of all ‘things’ in creation.”19 Said another way, for Indigenous people land and all its elements have agency by virtue of their very life energy in a way that they do not in Western cultures. Humans are only part of the natural world, neither central to nor separate from it.

From the Introduction of As Long as Grass Grows

It is no surprise that the #NoDAPL movement would spring up in Indian country. In the big picture, after all, it was just one more assault on the lands, resources, and self-determination of Native peoples since the beginning of American settler colonialism. As the Standing Rock story illustrates, the assaults have never ended. It also illustrates the trend in the past couple of decades of the uniting of the environmental movement with Indigenous peoples’ movements all over the world, something that hasn’t always been the case. Environmentalists recognize that the assaults on the environment committed by relentless corporate “extractivism” and development are assaults on the possibility for humans to sustain themselves in the future. They recognize that in some ways, what happened to the Indians is now happening to everybody not in the 1 percent.

This book is not about Standing Rock—but it takes Standing Rock as an excellent example of what environmental injustice in Indian country looks like. It starts from the assumption that colonization was not just a process of invasion and eventual domination of Indigenous populations by European settlers but also that the eliminatory impulse and structure it created in actuality began as environmental injustice. Seen in this light, settler colonialism itself is for Indigenous peoples a structure of environmental injustice. As this book will argue, however, the underlying assumptions of environmental injustice as it is commonly understood and deployed are grounded in racial and economic terms and defined by norms of distributive justice within a capitalist framework. Indigenous peoples’ pursuit of environmental justice (EJ) requires the use of a different lens, one with a scope that can accommodate the full weight of the history of settler colonialism, on one hand, and embrace differences in the ways Indigenous peoples view land and nature, on the other. This includes an ability to acknowledge sacred sites as an issue of environmental justice—not merely religious freedom—and recognize and protect sites outside the boundaries of reservation lands or on aboriginal lands of nonfederally recognized tribes. Overall, a differentiated environmental justice framework—we could call this an “Indigenized” EJ—must acknowledge the political existence of Native nations and be capable of explicitly respecting principles of Indigenous nationhood and self-determination.

These principles of nationhood and self-determination are plainly evident in the ways Native peoples have always fought to defend and remain on their lands and the life those lands give them. From the intrusions of the earliest colonists into Native gardens, to the havoc wreaked by railroads and the imposition of reservation boundaries, to today’s pipeline and fracking conflicts, Indigenous peoples have been forced into neverending battles of resistance. As the #NoDAPL movement made clear through the slogan “Water is life,” Native resistance is inextricably bound to worldviews that center not only the obvious life-sustaining forces of the natural world but also the respect accorded the natural world in relationships of reciprocity based on responsibility toward those life forms.30 The implicit question this book asks is what does environmental justice look like when Indigenous peoples are at the center?

To that end, this book proceeds in eight chapters that identify Indigenous approaches to conceiving of environmental justice. Having laid the foundation with the Standing Rock story, it views environmental justice and injustice from a variety of angles, taking a view on the history of American Indians’ relationship with the US as an environmental history. It uncompromisingly exposes the roots of white supremacy not only at the governmental level but even within the environmental movement itself, ultimately for the purpose of building effective alliances around issues of common concern. It recounts numerous examples of how Native and non-Native peoples are working together to build those partnerships, and the importance of women to these efforts, and takes you on a journey to Southern California to tell a story about how one coastal sacred site and iconic surf break were simultaneously saved as a result of successful coalition building and recognition of the sacred site’s importance.

Finally, the book looks for a way forward for environmental justice in Indian country by identifying positive trends and innovative ways communities are rallying together to build a more sane future in the face of relentless corporate power, an entrenched fossil fuel industry, and its collusion with the US State.  The most I hope to accomplish is to scratch the surface of what environmental justice means in Indian country, in terms of academic theory, activist praxis, and where the two meet in the formulation of government policies at all levels. It is a daunting (and humbling) task in which this is but one possible starting point; it is undoubtedly incomplete and imperfect, but one that I hope scholars more accomplished than I will expand and build upon in time.

Excerpted with permission from As Long as Grass Grows by Dina Gilio-Whitaker, published by Beacon Press (2019).