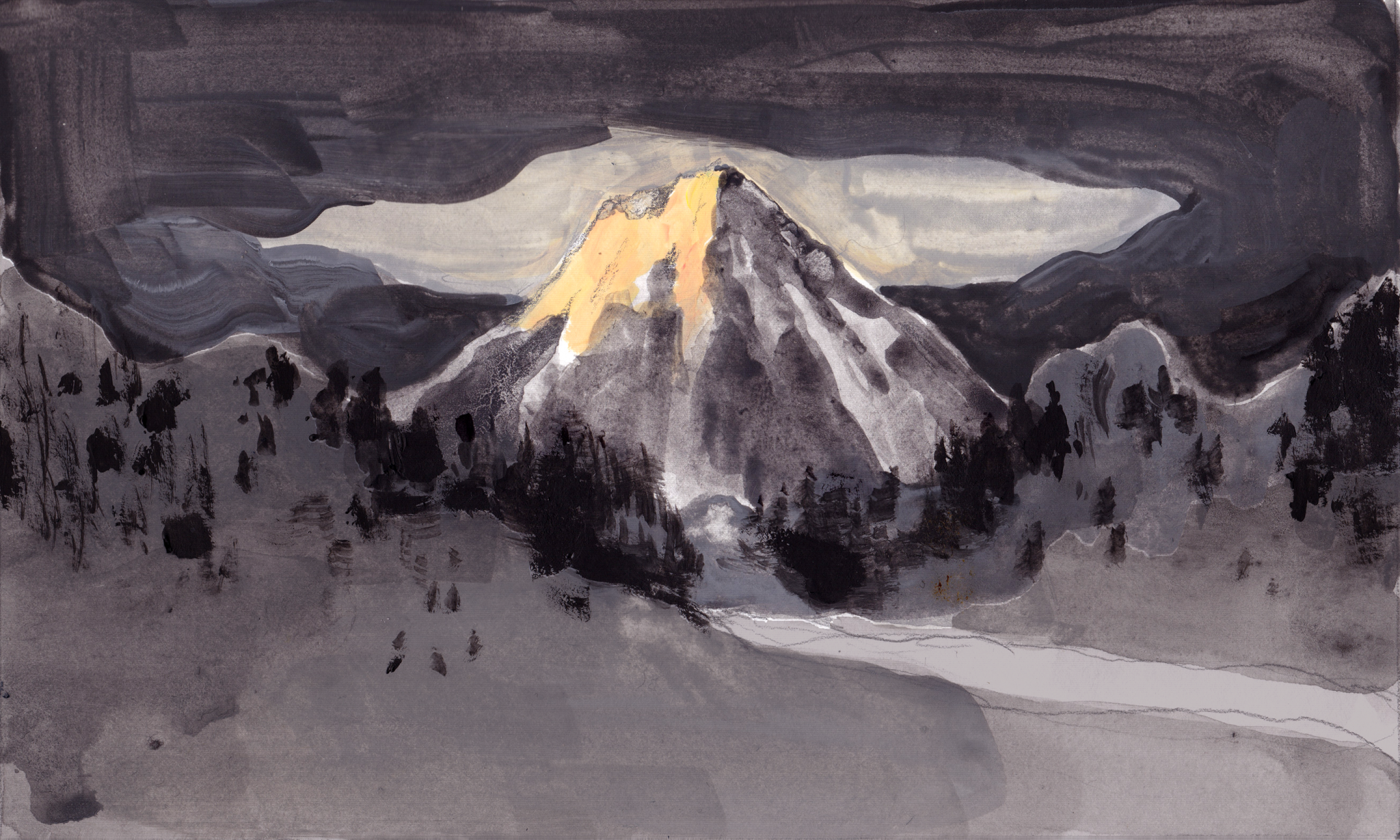 In the time of this great, strange plague, writer Paul Kingsnorth returns to the Celtic tale of Finnegas, the woodland hermit who devoted his life to catching and eating the salmon that contained the wisdom of the world.

This story was originally posted on Emergence Magazine.

I would like to tell you a few things about this virus and the lessons it should teach us, all the things we should be learning. I would like to add my voice to the crowd and be heard above it.

I would like to say: fish have returned to the Venetian canals now that humans have stopped polluting them.

I would like to say: the clouds of air pollution over Italy and China have dissipated since people were prevented from causing them with their cars, planes, factories.

I would like to say: up to 80,000 premature deaths which would have been caused this way have probably been prevented in China by the shutdown of the economy.

I would like to say: carbon monoxide levels in the air above New York have collapsed by 50 percent in a single week.

I would like to say: Nature recovers swiftly when we stop our plundering of Her bounty.

I would like to say: lift your gaze, humans.

I would like to say: we can learn from this, we can change.

I am squatting in the sun on this day of the spring equinox, it is a cold sun, I am down by the pond with my children, we are watching the tadpoles squirm free of their jelly under the leafing poplars. The world is turning.

Today is the day when shafts of dawn sunlight illuminate the passages of the old Neolithic tombs at Carrowkeel, at Loughcrew, at Newgrange. Today at Stonehenge, at Wayland’s Smithy, at West Kennet, all across these Atlantic islands—today is the day the light of Sky pierces the darkness of Earth. Today is the day that aérios meets chthón.

Their world, the world of those people long supplanted, was a world of tombs; a world of great barrows raised on high downs, barrows that became the pregnant belly of Earth, barrows into which, each equinox, a shaft of sunlight would pierce, enter the womb of the Mother, seed new life each spring.

I am writing this on the day of the equinox in the time of the great, strange plague.

I would like to say, as if I could tell you: This was what they knew. That each spring, Sky must meet Earth, that there is no life without both Sky and Earth, without both chthón and aérios. That if you live without one or the other, you will build a world that is bent on its axis, and that world may seem whole but will be only half-made, and one day it will fall over and you will fall with it.

I would like to say: well, we had it coming.

The Irish writer John Moriarty wrote a lot about chthón. His life’s search was for ways to re-embed us in what we have lost, to take us around and down again, to correct the Western Error. In his autobiography, Nostos, he writes:

I would like to say that we forgot all about chthón, we with our space stations and our stellar minds, our progress and our clean boots, our hand sanitizers and our aircon units, our concrete vaults and our embalming fluid; that for a short period we escaped into aérios, or thought we had, and now we are going to have to go underground again, and you can be sure we will be dragged there by the Hag against our will, and we will fight and fight as the sun comes down the shaft and we see again what is carved on the stones down there.

Unfortunately, I am not qualified for this role. I don’t know anything at all, and I am learning, painfully, that this was my lesson all along.

I don’t know anything at all.

My society does not know anything at all.

All the things I was brought up to label as learning : my A-levels, my Oxford University degrees, all the books I have read and written, all the arguments I learned how to formulate, all the ideas I learned how to frame, the concepts I learned how to enunciate. All this head-work, all these modern European ways of seeing, understanding, controlling, managing, directing the world:

None of that was it.

One of the best-known myth cycles of Celtic Ireland is the life story of the great warrior Finn McCool. Finn, in his boyhood, was apprenticed to an old woodland hermit by the name of Finnegas. Finnegas had spent his life fishing for an elusive salmon which dwelt in a pool under a group of hazel trees. The hazel trees contained a great old magic, and when their nuts dropped into the pool and were eaten by the salmon, they imparted to it all the knowledge and wisdom of the world.

Up from the earth the wisdom came, through the trees, down into the water, and Finnegas knew that if he could catch and eat the salmon then all that wisdom would be his.

One day, to his great joy, Finnegas finally caught the salmon. He laid it upon the ground and instructed Finn, his apprentice, to cook it for him while he took a walk in the woods to collect himself, to prepare for his great moment.

Cook the salmon, he instructed Finn, but eat none of it.

When Finnegas returned and looked into Finn’s eyes, he saw immediately that everything had changed. He saw that the catastrophe had occurred.

Did you eat the salmon? he demanded. No, master, replied Finn. But …

Cooking the salmon, Finn had seen a blister appear in its flesh. Perhaps wanting the meal to be perfect for Finnegas after his years of labor, he had pressed the blister down with his thumb and in the process had scalded his hand with hot oil from the cooking fish. Instinctively, he had raised his thumb to his mouth to suck away the pain.

In Finn’s eyes now, Finnegas saw all the wisdom of the world, and he saw too that it was Finn, and not he, who was destined for greatness. Finnegas saw that his life’s dream, his life’s work, was not what he had thought it was. Everything he had learned, the moment he thought he had prepared for:

Eat, master, said Finn, offering the fish to Finnegas, for this was your work. But Finnegas refused. No, he said. No, the fish is yours, Finn, and some part of me always knew it would be so. Yours is the work, Finn. My work was to prepare for it. Eat the fish, and use well what you learn.

I thought that once. I probably learned it at university. Now I think that I, we, our generations, those of us brought up within the machine, brought up to breathe with it, rely on it, those of us tamed and made by it, those of us who crushed the world without thinking—the wisdom to come is not ours.

We will never escape what we have made and what made us. We are not equipped.

We are not the people who will eat the salmon. We are not Finn.

But perhaps, if we’re lucky, we could be Finnegas.

Perhaps, if we’re lucky, we could lay some ground for what is to come.

Yours is the work. My work was to prepare for it.

Now I will say what I believe: that this civilization will not learn anything from this virus. All this civilization wants to do is to get back to normal. Normal is cheap flights and cheap lattes, normal is Chinese girls sewing our T-shirts under armed guard, normal is biblical bushfires and barrels of oil, normal is city breaks and international conferences and African children poisoning their bodies sorting the plastic we have dumped on their coastlines, normal is nitrite pollution and burning stumps and the death of the seas.

We made this normal, and we do not know how to unmake it, or—whisper it—we do not want to.

But Earth does, and it will.

It turns out that we were never in control at all.

Later in his autobiography, Moriarty writes that he is attempting to walk into culture. Into a culture so sure of itself that it wouldn’t ever need to become a civilization.

Cultures like that have existed before. They will again. But not yet. And when they come, people like us will not make them. We can’t. It is not our work.

Who knows what happens next? Maybe the virus will come and carry me away, me with my weak chest, me with my winter coughs, deepened every year by the damp Atlantic land I am grounded in, and there will be nothing to be done about this. Then my atoms and light will go back where they came from, or forward to somewhere else, and this is the way of things, and when exactly did we forget that? When exactly did we decide that our tiny little temporary mass of atoms, named and suited and given a role, pumped up with words and stories, should have any right at all to persist in its small form when all else is change and motion?

Nothing matters at all, and this is why everything does.

You can just watch it come.

Let us learn from this! we say. Let us take this crisis and use it to make us better! Better people, more organized people, wiser people. Sleeker people, more efficient people. Let us become sustainable! Let us learn to tell new stories, for the old ones are broken now!

We should be saying: break the stories, break them all. Nothing of this should be sustained.

We should be saying: no more normal. Not now, not ever.

We should be saying: we could die any moment, and this has always been true. Look at the beauty!

We should be saying: see the sunlight crawl down the passage of the tomb.

We should be saying: something is about to be illuminated.

We should be saying: watch.

This story was originally posted on Emergence Magazine.