The Will of The Land: Dave Foreman on Aldo Leopold 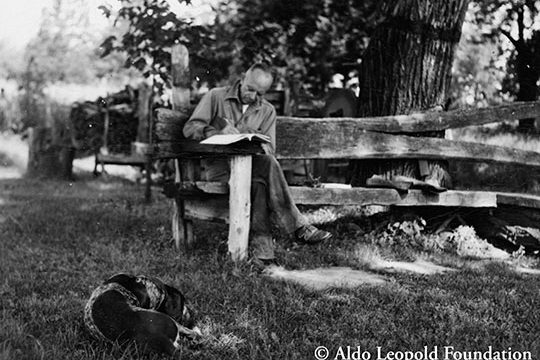 The second week of March marks #LeopoldWeek, an annual celebration of the work and influence of the legendary conservationist and ecologist, Aldo Leopold. Hosted by the Aldo Leopold Foundation, events related to Leopold and his work and influence are taking place online and all over Wisconsin, where he lived for most of his life in a small cabin on former agricultural acreage fronting the Wisconsin River. Leopold’s classic volume, A Sand County Almanac, was published in 1949 and his clear, caring and compassionate writing has profoundly influenced countless people who have identified with his call for a Land Ethic. This is succinctly defined by the Leopold Foundation, “In Leopold’s vision of a land ethic, the relationships between people and land are intertwined: care for people cannot be separated from care for the land. A land ethic is a moral code of conduct that grows out of these interconnected caring relationships.”

In honor of Leopold Week, we scoured the Bioneers archives for references to and stories about Aldo Leopold from speakers and presenters during the past decades of Bioneers Conferences. Among the many shout-outs to Leopold we discovered, an interview with Dave Foreman, co-founder of Earth First! and Founder of the Rewilding Institute, stood out and we’re pleased to share an excerpt of this conversation here.

From an interview with Dave Foreman at the 2000 Bioneers Conference:

“Gary Snider and others have shown that the world wild is one of the most complex words in the English language. It’s a very old word that goes back even before old English. In some ways we think of “wild” as meaning unruly, criminal, violent, that type of thing, e.g. the idea of the “Wild West.” And we confuse that sense of wild with the natural wild. For example, the Wild West was not the wilderness west. The Wild West was the West being tamed with cattle drives, outlaws and cavalry trying to exterminate the Sioux and all that. That was the Wild West; it really had nothing to do with wilderness, with the meaning of the word wilderness. It’s a complex word and we have to be very careful with how we define it or we get in trouble and a lot of people take advantage of that complexity of the word and try to confuse things. If we go far, far back to the roots of our language, we find that the word wilderness comes from three words: wil-der-ness.

Wilderness translates exactly as “will of the land.” In other words wilderness means self-willed land as opposed to land dominated by human will and civilization. It implies a recognition that there is land beyond our control, beyond our will. A closely related word is wildeor, which means self-willed beast or animal, an animal that is not under human control, not a domestic animal. I think there is something in our insecurity as a species that finds that self-willed land and self-willed animals are an affront to human arrogance, to our control of the planet, and therefore we’re afraid of them. Because we’re afraid of them we begin to loathe them, so fear and loathing of self-willed land and self-willed animals, I think, is at the root of the ecological crisis we find ourselves in now.

We need to come to terms as a people with the idea and the reality of land with a will of its own. We have to reach inside ourselves and find the generosity of spirit and the greatness of heart and the humility to say, yes, it’s good for there to be land not under our control, land with a will of its own, that we human beings should not be everywhere all at once, all at the same time, that there should be places operating under their own will. Far from being a threat, a self-willed animal is a great benefit to human beings because it teaches us humility, and goodness only knows we need to learn humility more than anything else in this modern era.

I think coming to terms with the real meaning of wilderness, the real meaning of wild animal is fundamental to the healing our breach with the land. Some people argue “Well, that sense of wilderness creates a duality between humans and nature,” and I say to the contrary, going into self-willed land in a humble and generous way and encountering the wildeor, just seeing the tracks of the grizzly bear, is the best way to come back to terms with the land and to heal that breach between civilization and nature. Recognizing that we do not have to dominate the land or nature to get benefit from it. It is not a threat to us. Instead it is a benefit to us and it’s good for our soul.

I don’t think anybody has thought more deeply into this than the naturalist Aldo Leopold whose book A Sand County Almanac, I think, was the most important book published in the world during the 20th century. It is a work of great humility and genius, a very wise book. Aldo Leopold was an early day forest ranger in Arizona and New Mexico back before World War I. Some of the experiences that he had as a forest ranger really changed his attitude, and he wrote them about ten years later in A Sand County Almanac. The one that strikes me the most, and the one that teaches us more than any other, is a story about the first year he worked for the forest service in Arizona.

He was assigned to the Apache National Forest, which was in eastern Arizona in the White Mountains in the Blue River country, which at that time had no roads in it. It was a vast wild place, accessible only on horseback. Even though they wouldn’t be able to log it, the Forest Service folks still wanted to know about the trees, what the standing board volume was. Leopold, newly graduated with a Masters Degree in Forestry from Yale, would go out for two weeks at a time with a crew of men on horseback and cruise timber. On one of those trips they had stopped for lunch on a rocky little rimrock overlooking a rushing stream. As they sat there eating their lunch they thought they saw a doe ford the stream below, but when they saw a bunch a wolf pups come tumbling out of the willows they realized it was an old mamma wolf. A wolf has very long legs and you can often mistake them for a doe. But in those days any wolf you saw was a wolf you shot, so Leopold and his men ran to their horses and pulled the 30s out of the scabbards and began to blast away down hill. Even though it’s hard to aim down hill, they sent a lot of lead down the hill that day and the old mama wolf crumbled and all the pups dragged her shattered legs into the willows to die a slow death. Leopold and his men mounted up and rode down the hill to skin out the varmints and pack their hides back to town to sell. 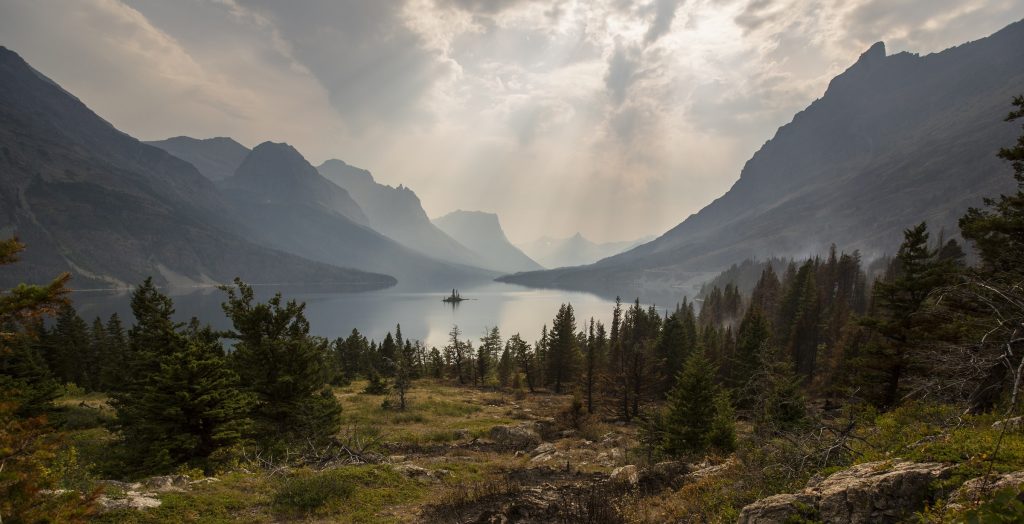 But something happened to Leopold that day that he wrote about in A Sand County Almanac decades later. He wrote, “We reached the old wolf in time to watch a fierce green fire dying in her eyes. I realized then and I’ve known ever since that there was something new to me in the eyes of the wolf, something known only to the wolf and to the mountain. I was young then and full of trigger itch because fewer wolves would mean more deer. I believed no wolves would mean hunters paradise. But after watching the green fire die I realized that neither wolf nor mountain agreed with such a view.”

I think in that story Leopold sums up our relationship with nature and the path we need to take towards healing that breach, to begin to think like a mountain and begin to think in the long term, to look at other values instead of just monetary ones. So many people today know the price of everything and the value of nothing. We’ve got to get back to values instead of prices. That’s how we need to look at nature, not how much money it can make us, but what is there in it and what its real value is to the human spirit and to its own self. That is why we need big wild places with wolves and grizzly bears and mountain lions and jaguars in them—for their own sake and for the whole dance of life to keep going on and on through generations and also for our own mental health. I think it is very difficult for individual human beings or human society as a whole to be mentally healthy when we are not in the presence of self-willed land and the self-willed beast.”