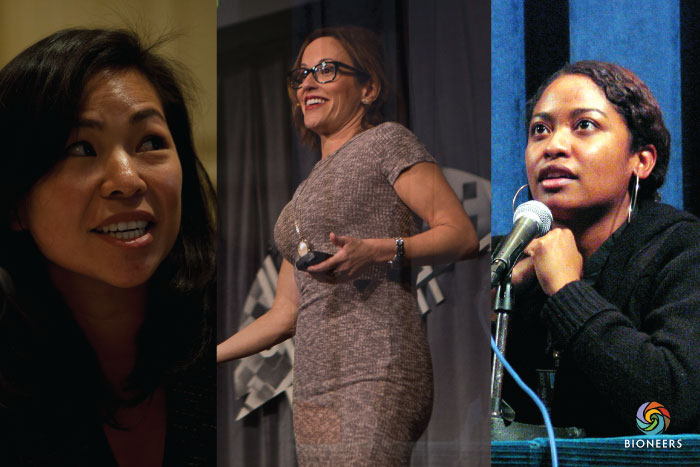 For the beginning of 2016, Grist.org, the irreverent environmental news blog, created Grist50, a list of “The 50 People You’ll Be Talking About in 2016.” Obviously there are far more than 50 people doing great work worth promoting in 2016, but here at Bioneers we’re quite familiar with the excitement and struggle of annually identifying a bounded number of incredible people and projects to highlight. We’re thrilled to see some of our favorite Bioneers speakers over the years making the Grist50 list, alongside many other brilliant minds. Check out some of these luminaries and their Bioneers talks below:

“Let’s re-imagine what environmentalism means, and re-identify, re-envision what an environmentalist is. Because whether we are out on a beautiful hike or we’re walking our dog with our family, we’re appreciating nature and we are enjoying and valuing what it gives to us. That exposure is what makes us truly care and take the action that we need to in order to protect our environment. It’s time for us to do this, it’s time for us to bring diversity, the same biodiversity that we see in nature and value so strongly, into our movement.”

Vien Truong, J.D., has been a speaker at several Bioneers Conferences, most recently in 2015. Her voice and work are featured in one of our most downloaded episodes from the 2015 radio series, Bioneers: A Revolution from the Heart of Nature, embedded below, and in a chapter of our recent eBook, available for free here. Vien is the National Director of Green For All, a national initiative to build an inclusive green economy, previously led the Greenlining Institute’s Environmental Equity team, helping pass SB 535, which directs a quarter of CA’s Greenhouse Gas Reduction Fund to disadvantaged communities.

“Often, our environmental campaigns are focused on traditional environmental groups, and yes, that is important. We need to have people who are fighting for the environment at the table. We now also have to realize that sixty percent of Californians are people of color. Seventy-three percent of people under eighteen years old in California now are people of color. We have to recognize this, and we have to organize around it if we’re going win.”

Jihan Gearon, joined us in 2013 on several panels as part of the Bioneers Indigenous Forum. Jihan is of Navajo and African American ancestry, originally from the Navajo reservation, is the Executive Director of the Black Mesa Water Coalition, a board member of the Center for Story-based Strategy, and a steering committee member of the Climate Justice Alignment. She is a graduate of Stanford with a Bachelors of Science in Earth Systems and a focus in Energy Science and Technology.

“Under Black Mesa is the Navajo Aquifer, a pristine aquifer, the best water you can drink and the sole source of drinking water for Navajo and Hopi communities that exist in that area. Coal was being pulverized, mixed with water from the Navajo aquifer and pumped 273 miles through a slurry line to the Laughlin generating station. This was the only place in the world where coal was still being transported in this way. That’s how we got started, around protection of the water because it was being used up and contaminated.”