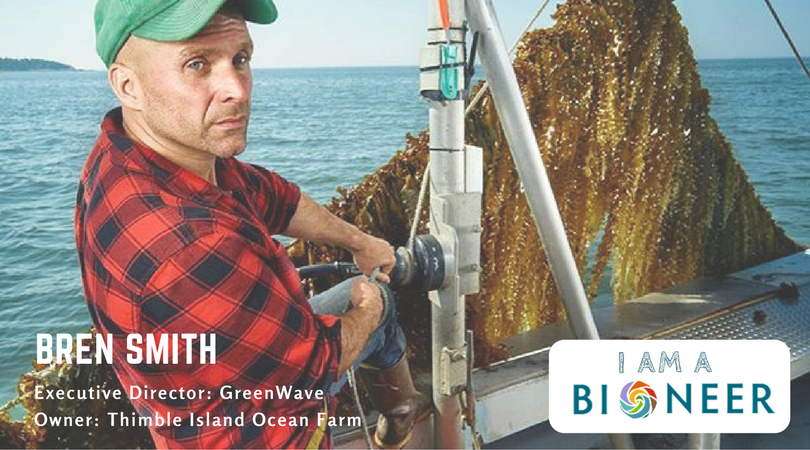 Bioneers co-founders Nina Simons and Kenny Ausubel have spent much of their adult lives cultivating a community that works toward solving the world’s biggest problems. Take, for example, the twin problems of overfishing in our oceans and the fundamental decline of the health of these ecosystems. Greenwave founder Bren Smith’s revolutionary 3D-ocean-farming system offers a solution to these problems and more: Using 3D ocean farming, Smith and a growing pool of independent farmers construct underwater vertical setups that employ cages and ropes, allowing them to farm mussels, scallops, oysters, clams and sea vegetables within remarkably small areas. GreenWave ocean farms produce high yields without requiring substantial resources, making them far better for the planet than traditional fishing and agricultural practices.

When Ausubel, Simons and the Bioneers team heard about GreenWave, they immediately saw its world-changing potential. They booked Smith for a keynote address at their 2016 conference, marking a major positive shift for the 3D-ocean-farming movement. “After speaking at the event last year, we had over 100 people who wanted to start farms in California alone,” Smith says. “We directly raised $100,000 after the event, and I think it was the first time we were introduced and given access to such a diverse set of allies.”

To date, more than 24 ocean farms in the Northeast have been established through GreenWave, and Bioneers is officially partnering with GreenWave to build out a strong California program, starting with two new West Coast farms. In addition to their ability to produce food and jobs, ocean crops are ideal for creating biofuel, and kelp soaks up more than five times the carbon of land-based plants. “If you take an area the size of Maine, you could replace all the oil in the United States, according to the Department of Energy,” Smith said in his keynote address. “The New Yorker recently called it the culinary equivalent of the electric car.”

Building a Community of Solutions

For more than three decades, Ausubel and Simons have led Bioneers, an organization that has come be be known for its knack in identifying inspirational minds and giving them a platform from which to speak and connect. From that platform and the networks it’s enabled, dozens of groundbreaking ideas have become a reality.

Simons and Ausubel credit their community of luminaries, supporters and staff for making this recognition possible. Meanwhile, Smith credits Ausubel and Simons with helping him expedite the expansion of his vision. “That really broad frame and community that they’ve built is really impressive,” he says. “It’s really important to those of us trying to develop solutions to all the problems we face and kind of get all hands on deck. It’s a great, loving family.”

Like Simons and Ausubel, Smith is a believer in the idea that individuals can make change happen. “This isn’t just about jobs,” Smith said in his keynote address. “This is about agency. One of the major deficits in our society today is the feeling that you can make a difference—that you have to be an Amazon, you have to be a Google, in order to tackle the big problems. You don’t.”

Stay up-to-date on what world-changing Bioneers like Bren Smith are accomplishing by signing up for our newsletter.