Andy Lipkis: Trees as Models for Adaptation and Resilience 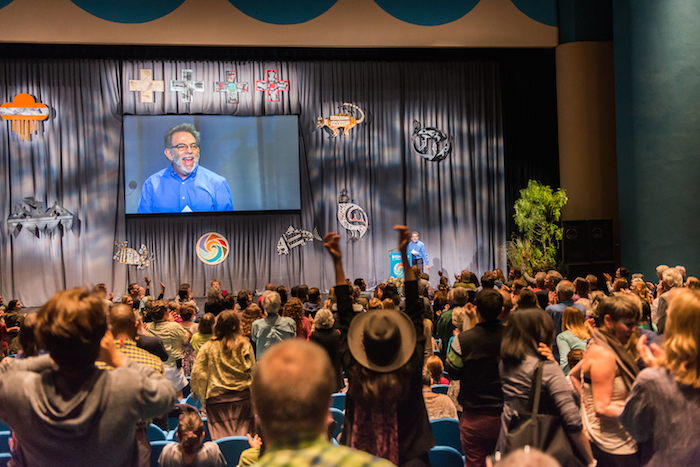 “Superheroes are what happens when any of us link hands and say we care.” — Andy Lipkis, TreePeople

This is an edited transcript of Andy Lipkis’s keynote at Bioneers 2015. Full video here.

Times have changed. The doors to the White House have opened. The Pope has opened the doors. This is a critical time because, for all of us who have been knocking on those doors for decades, it’s easy to be frozen, thinking we still need to be pounding. We need to get our feet moving and move forward.

It is a new day, and we need to wake up and notice it. Severe weather is now upon us: the threat of 50-years-out sea level rise, forget about that. We have to accelerate the work.

The times are upon us and not only do we need to work rapidly and with great vigor on policy change, but also our bodies are going to be needed. This is not a time for the faint of heart.

A retired schoolteacher named Eudora Russell got trained as a TreePeople citizen forester so she could mobilize her Los Angeles neighborhood. She planted some trees. It worked. And then she dreamt big. She wanted to plant all of Martin Luther King Boulevard with trees as a living monument to the man. But the mayor said it would take 5 to 10 years, millions of dollars, not going to happen. She refused to take no for an answer. She came to me and I said, “Yeah, let’s show what people can do when they join together. Let’s do it in a day.”

Now, how did it happen? She shared her idea with me. I shared it with more people. A thousand people volunteered to be trained in advance, and 3,000 people showed up on the day to plant. Every month for 10 years, a dozen TreePeople staff and volunteer leaders were joined by 100 people to water the trees and protect them. And that’s why there’s a 7 mile-long row of trees in South Central Los Angeles that you can see from space, honoring Dr. King.

It rained a lot in Los Angeles in 1980. Mudslides threatened communities. People called for help, but first responders had no training or tools for dealing with all the mud. There was no 911. There was no preparedness for what happens with severe rain. After three days the mud moves, houses move, people are in trouble.

We used our shovels and got a bunch of volunteers to rescue a couple homes,. A city councilman saw that and said, “If it gets worse, could you do this on a larger scale?” I was 22. I had no idea what I was doing. And I said, sure, why not.

We crowd-sourced and reached out to the community. There were no social media, no cell phones, no nothing back then, but we went to radio and TV, and said we need help. We need able-bodied volunteers. The city certified us all – 3,000 volunteers worked for 10 days, and saved 1,200 homes. The fire department and emergency command center turned their dispatches over to us. But the volunteers who showed up were off-road vehicle association folks, people with bumper stickers on their car that said, “Kill a Sierra Clubber.” Ham radio operators. The community showed up and saved the community.

The Crucial Community of an Oak Tree

They took away our sponges. That’s the reason it was flooding in LA for several years. The oak trees are the pillars of our ecosystem, and they are incredibly important.

The minute that acorn sprouts, it puts down a root as far as nine feet deep before it sends out leaves. It’s establishing a stable water supply. But from there it starts to transform the ecosystem and attract all kinds of critters it relies on to be able to thrive and grow. This massive thing, one of the largest living things on the Earth, could not function without the community of tiny critters that live in this space underneath the tree, like the worms and the mycorrhizal fungus.

That tree cannot drink unless each tiny piece of fungus hands a molecule of water to its roots. So you ask, “Who’s more important in this equation?” It’s not about that kind of power. We all need each other. This space is a collaborative space. Everything’s happening because these guys are communicating.

The oak and its community becomes a kind of a sponge with huge capacity and volume to capture water in the massive canopy of the tree. The water drips slowly to the ground below, and that fungus captures it. The animals, critters, everybody works together to clean and treat it, and then they send it to the aquifer. The capacity of that one tree with a 100-foot canopy, is 120,000 gallons of water that is captured, cleaned, sent to the aquifer.

When we take that tree away, we all that water downstream, rather than to our aquifer. We send the soil with it. And what do we replace it with? Bureaucracy. We take the trees out, we pave the land, we lose the water, and then we need to bring water in.

In Southern California, we have a water supply agency that brings in 90 percent of our water. It costs more than a billion dollars a year to bring it in and distribute it. At the same time, it rains enough in Los Angeles to meet half our needs. But we throw almost all that water away by failing to capture it. And now we need a flood control agency that spends up to a half a billion dollars a year to move that water out of town.

That water is contaminated, so we have a pollution control agency. Meanwhile all that money flowing out is damaging the economy and we’re trying to figure out how to rebuild it and create jobs. Meanwhile, half the water we use in Los Angeles is to grow grass and landscapes. It’s mowed, collected and sent to the landfill, which costs about $100 million a year.

What you see here is a hemorrhage of cash and resources, not from anyone being evil, but because we dis-integrated the ecosystem and then put regulations around these people, our friends, preventing them from collaborating. We had to fix it. We worked to bring them together, slowly, as we convinced them that it made economic sense, engineering sense and social sense to join together. And when they joined, we were able to bring about new solutions.

So, we started biomimicking what the tree does. A TreePeople cistern is the same 100-foot diameter space as that oak tree’s canopy but it’s deeper. Its capacity is a quarter million gallons. It captures enough water to help protect us from floods, and keep a 45-acre park green.

Last year, during the drought we started with an empty cistern. It rained four inches in one week in February, which gave us 65,000 gallons. In May, a fire truck showed up, Code 3, red lights and siren. I ran out. It was 105 degrees. They were deployed, ready for fire. I asked, “What’s up?” And they said, “We heard you have water.” This is the times we live in. I said, “Come and get the water.”

We have spent a lot of time building these partnerships, getting agencies to work together. They knew it made sense, but they still weren’t collaborating full time, all the time, commingling their DNA, their sensibilities, their passion. We needed to take it deeper. Those three agencies – Department of Water & Power, Flood Control, and Sanitation – have asked us to facilitate them in a new partnership where we build new hybrid infrastructure they can work towards full time.

Climate scientists said Australia would be the first continent to be really rocked with early onset severe weather. They said California would be next. Hotter hot. Drier dry. Wetter wet. Colder cold. And ladies and gentlemen, we are in it.

It hit Australia around the year 2000, the millennium drought. Very similar to the California drought, but it lasted longer. Australians responded, and the government helped. People started conserving and then government helped enable them do more. The government helped people install three types of cisterns for their homes and on their farms: 2,000 gallons, 5,000 gallons, 20,000 gallons per house. Between 20 and 50 percent of the homes in every city adopted these, installed them, connected them to their toilets, their laundry, and saved their landscapes. Everybody in Australia became a manager of the water instead of a mis-manager.

They radically reduced their water use from 80 gallons per person per day to 33 gallons in Brisbane. They did all kinds of other things: water recycling, wastewater recycling. I even visited a farm, an organic biodynamic farm that still retained its certification but using treated wastewater mixed with rainwater, and the wine was amazing.

It is hotter than ever in Australia. It started getting to 115 degrees in cities and people started to die. They’ve died nearly every year there from the heat. City managers figured out that the best way to save their population was to return to the trees and create dense tree canopy. In Melbourne, they committed to 40 percent tree canopy which is enough to cool the city during peak temperatures by four degrees, and save lives.

That country’s resilience is inspiring our leaders. This week, another delegation of California legislators is arriving there and meeting with the same people that we did, and they’re bringing back the solutions.

Australia is so similar to us that it’s easy to think that we could replicate what they’ve done, and replicate it in a hurry. We need to do that.