As The World Burns | Rupa Marya 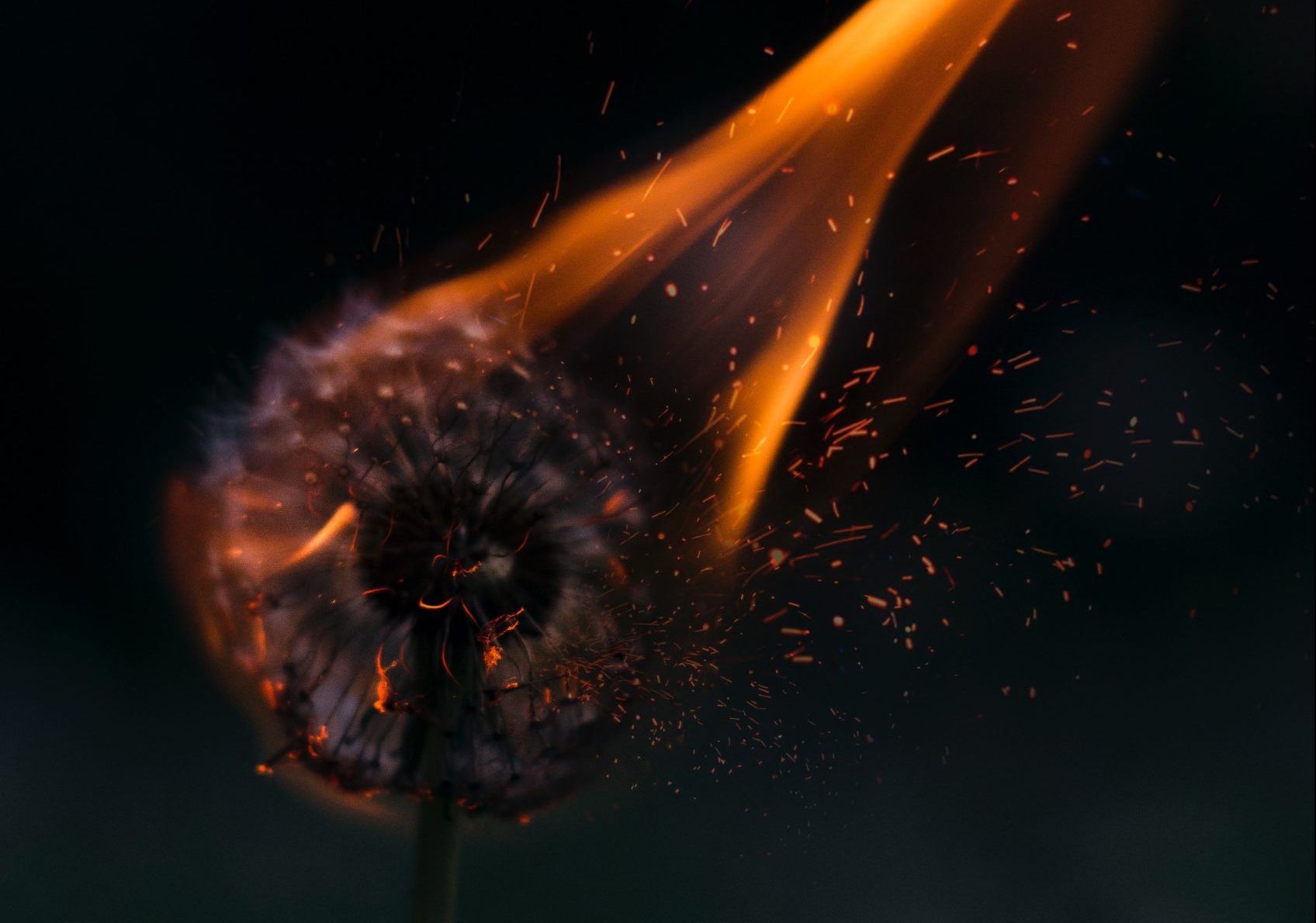 From a surge in mass uprisings in response to systemic racism, a rise in inflammatory illnesses like gastrointestinal disorders, and an increasing number of climate refugees –– our bodies, society, and the planet are inflamed. Inflammation is connected to the food we eat, the air we breathe, and the diversity of the microbes living inside us, which regulate everything from our brain’s development to our immune system’s functioning. With the climate crisis unfolding every day, the ecosystem we share slowly degrades along with our collective health.

Rupa Marya, physician, activist, and co-founder of the Do No Harm Coalition, teams up with the New York Times bestselling author of The Value of Nothing, Raj Patel, to reveal the links between health and structural injustices – and to offer a new deep medicine that can heal our bodies and our world.

In this excerpt from their latest book, INFLAMED: Deep Medicine and the Anatomy of Injustice, Marya calls for a diagnoses to the inflammation of our planet and collective health.

Rupa Marya spoke about deep medicine at the Bioneers 2021 Conference. Watch her keynote address: Deep Medicine and the Care Revolution.

Your body is inflamed. If you haven’t felt it yet, you or someone close to you soon will. Symptoms to look for include uncontrolled weight gain or unexpected weight loss, skin rashes, difficulty with memory, fever, trouble breathing, and chest pain. Inflammation accompanies almost every disease in the modern world: heart disease, cancer, inflammatory bowel disease, Alzheimer’s, depression, obesity, diabetes, and more. The difference between a mild course and a fatal case of Covid-19 is the presence or absence of systemic inflammation.

Your body is part of a society inflamed. Covid has exposed the combustible injustices of systemic racism and global capitalism. Demagogues around the world kindle distrust and hatred. Governments send in the police to impose order, monitor lockdowns, enforce a return to work for those who comply and incarceration for those who do not. From the United States to South Africa, India, Brazil, and China, people suffering oppression set tires and cars and gasoline alight on barricades. The petrochemistry of our protest reflects the materials that we have on hand. Everything we’ve made, we’ve made from fossil fuels: energy, food, medicine, and consumer goods. The world has been organized to burn.

As a consequence, the planet is inflamed. Global temperature records are being broken, forest fires have turned from annual to perennial events, oceans are rising, and storms have become bigger and stronger. This is the epoch of endless fire. Human destruction is tearing apart the web of life, shredding the network of relationships between organisms and places in which our lives are embedded. Inflammation is a biological, social, economic, and ecological pathway, all of which intersect, and whose contours were made by the modern world.

Inflammation is triggered when tissues and cells are damaged or threatened with damage. A complex and intricately coordinated response of the immune system, inflammation mobilizes resources to ultimately heal what has been injured. In a healthy, balanced system, once the mending has occurred, inflammation subsides. When the damage keeps coming, the repair cannot fully happen, leaving the inflammatory response running. A system of healing then turns into one that creates more harm.

As we explore inflammation in this book, we will sometimes use the language of the body in analogy. So: salmon are to rivers as hearts are to blood vessels. They both function as nutrient pumps in systems of circulation. We sometimes proceed by simile: dams are like vascular obstructions. We’re not above metaphor. Trade routes, for example, are colonialism’s arteries, moving people, capital, goods, and diseases around the world system, and connecting bodies, societies, geographies, and ecologies. The metaphor helps us to show that inflammation is systemic and that the systems are linked. But we aren’t making a literary argument so much as a medical one. The inflammation in your arteries and the inflammation of the planet are linked, and the causal connections are becoming increasingly clear; your physiological state is a reaction to social and environmental factors. Racial violence, economic precarity, industrial pollution, poor diet, and even the water you drink can inflame you.

These connections are not new or even our own. Indigenous people have been articulating them for the past six hundred years, in an ongoing global resistance to the destruction of their ways of life. Abolitionists have been articulating them since 1619. From the Global South, traditions of healing have survived successive waves of colonial destruction. Our work stands on the shoulders of movement workers and visionary thinkers from the past and our contemporaries, from the agroecological farmers of Amrita Bhoomi, in Karnataka, India, to the lived and theorized struggles for abolition of Angela Davis. We are duly inspired by Robin Wall Kimmerer’s braiding together of science and story and the border-smashing articulations of Miles Davis and Frantz Fanon. Our analysis has been shaped by organizing with communities in struggle, and by the stories of patients who pointed the way to the connections we explore. We acknowledge and honor those people whose legacies of resistance have shaped our own understanding. To this foundation of knowledge that precedes us, we hope to contribute a political anatomy, one that can help identify the root causes of humanity’s shared pathologies, in our bodies and in the world around us.

Consider the case of Shelia McCarley. She was born on the outskirts of Muscle Shoals, Alabama, on land that had once been Cherokee, a tributary of the Trail of Tears. Power lines strung along the Tennessee River during the New Deal era allowed industries to flourish and gave Alabamians work for a dignified wage. Meanwhile lax regulations permitted the industrial effluent to flow into the Tennessee River. McCarley grew up in Florence, drinking water drawn from the family well. On the weekends, she’d eat catfish pulled from the river with her own hands, fish that had lived and died in water tainted with mercury and “forever chemicals” like PFAS, or perfluoroalkyl substances.

Found in everyday items like waterproof jackets, nonstick pans, and firefighting foam, PFAS are a family of five thousand “forever” chemicals, so called because they accumulate in our bodies and environment and never degrade.7 They are behind a range of health problems including cancer, thyroid disorders, and immune system disruption.8 Failure to regulate industrial production has led to their widespread presence in drinking water.9 Corporations like 3M, which has a production plant on the Tennessee River, spent decades and 7 dollars covering up the negative health and environmental impacts of these chemicals before finally agreeing to settling $35 million for putting PFAS into the water.

When she was in her forties, McCarley left Alabama for California. Early in middle age, her health began to deteriorate. Her face became covered with rashes, her hair started falling out, and her joints swelled. Her body seemed to be attacking itself. At fifty-nine, she was transferred to University of California, San Francisco’s Parnassus hospital; her chart declared she was suffering from an autoimmune disease called lupus.

But something wasn’t right. She had some of the classical signs of lupus, like a rash and low counts in her blood cell lines, but the panel of tests that are diagnostic for the disease came back negative. Her illness was a mystery to the hundreds of health care workers who attended her at one of the world’s most sophisticated hospitals. Rounds of steroids and other immune therapies did nothing. The most seasoned clinicians and investigators entertained rare and esoteric diagnoses but found no clear match-up with McCarley’s course.

The one thing that every physician who saw her agreed on was this: the markers for inflammation in her body were as high as they had seen. It was as if she periodically went into septic shock. Sepsis affects an estimated 30 million people every year worldwide, killing 5 million of them, with the largest burden in the Global South. The acute inflammation of sepsis is directly responsible for at least 20 percent of all deaths worldwide. Typically in septic shock, a person’s body sets off intense inflammation in response to an infection or trauma. Body temperature spikes to a fever to fight the offender. It can then plunge into hypothermia as the body fails to correct the offense. White blood cell counts peak and plummet. Blood vessels relax, leading to a dangerous drop in blood pressure. To compensate, the heart beats faster; sometimes people breathe faster, too, and become disoriented.

McCarley had a broad range of symptoms. She appeared to be infected, but no one could find an offending microbe. In the intensive care unit, she received drips of antibiotics and pressors, medication to stop her blood pressure from dropping. After a few days, she seemed better. In addition to quelling infections, antibiotics can also tamp down inflammation. As her symptoms lessened, she was taken off the antibiotics and removed from the ICU. Soon enough, her symptoms returned, so she was readmitted until she’d recovered enough to be released again. The cycle repeated: into the ICU and on a drip, symptoms abated; removed from the ICU, symptoms returned. All the while, there was no evidence of any infection or autoimmune disease.

By the fifth month, she began to despair. She was tired of being poked and prodded, of being offered a glimpse of recovery, only to have it snatched away when her symptoms returned. She asked her doctors to change her goals of care to no longer prolong her life and to allow her to die.

The treatment kept her alive, but eventually it broke her.

McCarley’s autopsy revealed that over the course of five months, the marrow in her bones had been replaced almost entirely by activated macrophages. In a normal body, these white blood cells engulf bacteria, viruses, and our own sick or dying cells. But something had triggered her macrophages to go into overdrive—very likely the toxic exposures she grew up around in Muscle Shoals. As the activated macrophages multiplied in her bone marrow, they pushed out other important cell lines, leaving no lymphocytes to respond to infection and no platelets to help clot blood. McCarley became vulnerable to infection and bleeding. She died from both, overwhelmed by inflammation.

To many of the nurses and doctors who still turn over her case in their minds, McCarley was killed by her body’s own response to her environment, poisoned by the ongoing exposure to the modern world. But we will never know. Causal relationships are a hardwon scientific prize. It’s impossibly difficult to isolate the reasons why McCarley’s macrophages behaved the way they did. Over a sufficiently large population, however, it’s possible to see patterns emerge. In 2012 a quarter of all human deaths were traceable to environmental factors in the air, water, and soil.

Each toxin works on our body differently. The European Chemicals Agency suggests that there are over 144,000 human-made chemicals in the world today, few of which have been around for longer than a generation or two. The body doesn’t have that many tricks to rid itself of chemicals that cause harm. The fallback is to activate its own mechanism of damage control and repair.

But inflammation itself isn’t a disease—it’s a sign of a larger problem. From McCarley’s devastated bone marrow to the clouded lungs of Covid patients, the source of inflammation is more than a virus, or even the poisons with which we humans have contaminated our air and water. To understand why we are sick in the ways we are, we must understand more fully what’s driving this phenomenon. What we need is a diagnosis.