Beyond the Headdress: Breaking Free from Native American Stereotypes and Misinformation 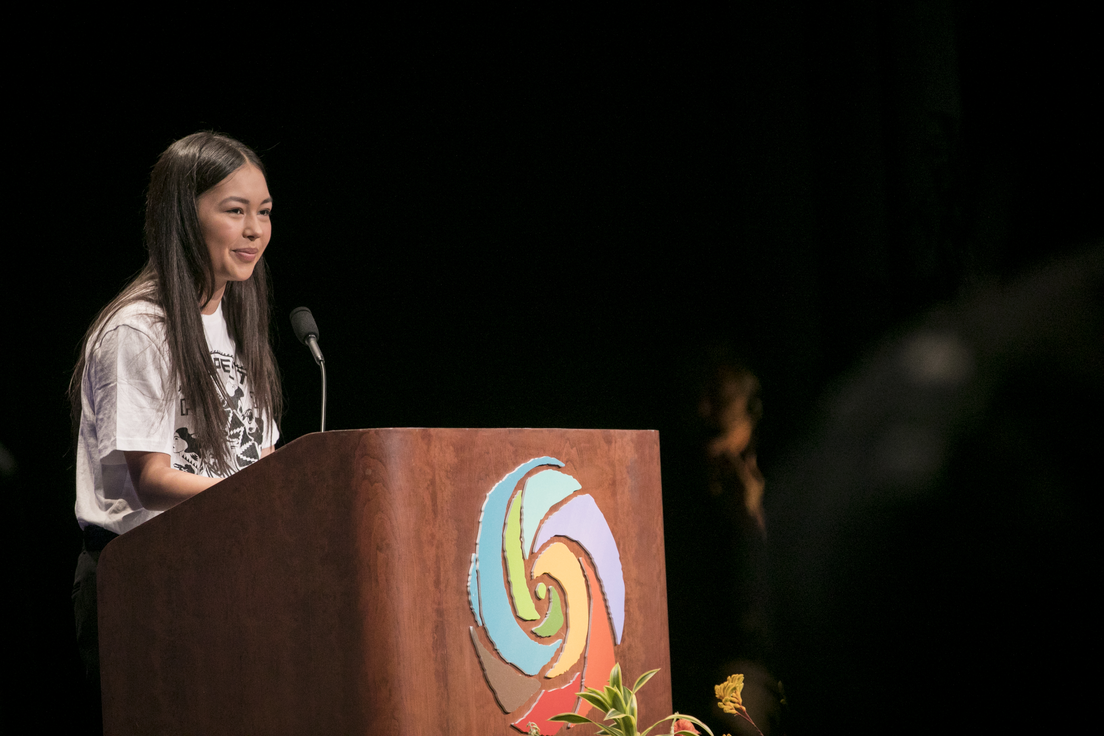 At Bioneers 2018, Lim illuminated the hidden history of California and how she has had to grapple with stereotypes and historical trauma to find her identity as a Native youth.

Following is a full-text version of Jayden Lim’s speech. Watch a video of her address here.

On Columbus Day of 2005, I raised my hand eagerly to claim my Native American heritage and protest the celebration of Columbus in my kindergarten classroom. I was immediately told by my teacher that I was not Native American because I was perceived as the Korean in the primarily white classroom.

In 2010, I was forced to stay behind in my fourth grade class while the rest of the kids were dismissed for their lunch in order to build a Styrofoam mission. The teacher instructed me to keep the project in class in hopes of my Pomo mother not finding out.

In 2012, my Spanish teacher claimed that Native Americans should not be considered First Peoples, as they crossed the Bering Strait and are actually of Asian origin.

In 2016, my high school dance department performed a mock Native American ceremony in attempt to resurrect their dead Indian princess in their Peter Pan-themed dance show. A few months later, I called out the performance on a national platform at the White House. I returned home to receive backlash, as the dance team felt targeted and hurt that I would point out their mistakes in front of Michelle Obama.

My experience with racism and stereotypes is just one of hundreds of thousands of Native American students in California. On behalf of those students, I’m demanding that we move beyond the headdress. And I’m not referring to the headdress that is meaningful to the Plains and other tribal communities. I’m talking about the white man’s interpretation of the headdress as a savage and uncivilized representation of Native Peoples.

While Native American symbols have been popularized in media and commercial markets, those symbols are appropriated and devalued of their meaning once they are stripped from their Native communities. The popularity of the symbol of the headdress is a symptom to a much larger problem, and the problem is dehumanizing and exploitation of Native Peoples and their ancestral lands. We need to move from symbolism to reality. In order to start this movement, we must acknowledge the past.

Spanish mission represent the first wave of genocide in California. Yet in elementary schools, we are taught that docile Indians flocked to the missions in search of water and civilization through Christianity. From this history, Native people are characterized as savage and in need of saving. And Europeans are painted as heroes and canonized as saints. If we are to acknowledge the past and move towards reality, we must expect that what we were taught was a romanticized false narrative. In actuality, children were thrown off cliffs, women were sexually assaulted, and men were mentally and physically abused.

During the American colonization of California, Native men were referred to as bucks while Native women were identified as squaws. Squaw’s a word meaning vagina, whereas buck equated Indian men to animals. These stereotypes facilitated a war of extermination on California Indigenous Peoples. The over-sexualization of Native American women supported human trafficking as primarily men came during the Gold Rush.

Today, pre-contact Native American women such as Disney’s Pocahontas are stereotyped and portrayed as tall brown women dressed in deer hide mini skirts and matching tops. This portrayal and over-sexualization has led to an epidemic of missing and murdered Indigenous women, and the government has no mechanism to track the severity of the problem.

During the American period, Indian female children were sold for $200 pursuant to state indenture laws, while Indian adults were hunted as bounties. The militias were paid 50 cents to $5 per scalp.

In 1860, the California government spent $1.6 million on the hunting of Native Peoples. This would equate to $46,400,000 today. When white men would bring in a scalp, it would drip with blood in order for them to trade for their money. Hence the term redskin, which is the name of Washington, DC’s football team. This term embodies genocide of Native American people, yet the capital city of our country wears it proudly.

The history of California is gruesome and cruel, yet Native American people were able to endure multiple waves of genocide while still cultivating their connection to culture. Native American Peoples’ existence today is resistance in itself.

We were not expected to survive 300 massacres in California and many more across the country. We were told to kill the Indian and save the man by suppressing our ceremonial practices, stories, and languages.

Today we stand stronger than ever as we initiate the movement from symbolism to reality. The history of my ancestors must be respected and learned, because in order to respect the Earth, we must respect Indigenous Peoples.

This history is not a plot for the next blockbuster movie. I am not a mascot. I am not a Halloween costume. I am not a hashtag, so don’t trend on me.