A Conversation about Climate Activism with May Boeve, Executive Director of 350.org 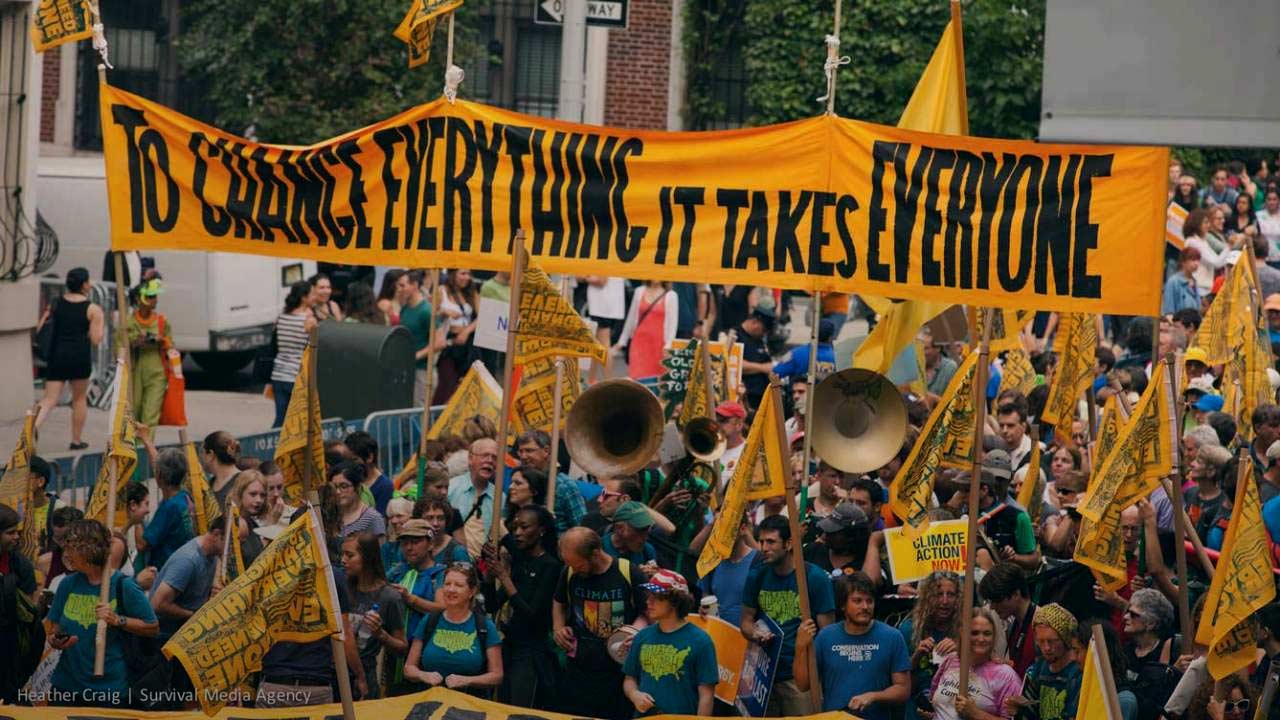 In 2007 May Boeve was a student at Middlebury College when she and several peers teamed up with one of their professors, a journalist named Bill McKibben, to launch an organization aimed at catalyzing a global climate movement: 350.org. It feels almost hyperbolic to describe the impact that 350.org has had on the global climate movement in the time since. With a truly global reach and influence, 350.org has helped to catalyze literally millions of people and thousands of direct actions, campaigns, marches and protests, all aimed at increasing awareness of and taking action on climate disruption. May is now the Executive Director of 350.org, a role she’s held since she was 27, and under her leadership (along with many others, as she’d certainly be keen to note), the organization has remained relevant and vital as the climate movement has evolved and transformed, expanding to incorporate and acknowledge other essential movements for environmental justice, indigenous rights and more.

May spoke with Teo Grossman, Bioneers Senior Director of Programs and Research about 350.org, international climate action, her own personal approach to this work and more.

Teo Grossman, Senior Director of Programs & Research, Bioneers: 350.org has accomplished a huge amount since its founding and has really been essential in describing and mobilizing action (along with other key groups, obviously). Do you have a sense of the overall size of the climate movement at this point? How many are we? In how many countries does 350.org have staff and affiliated networks at this point?

May Boeve, Executive Director, 350.org: We are many! We take a very expansive view of who is in the climate movement—not just individuals or organizations who have a specific focus on climate action, climate policy, climate organizing, climate communications, but also those who see themselves as impacted by climate change or who are working towards its solutions. In that sense we comprise a movement of movements—from farmers who are rebuilding healthy soils that also sequester carbon, to teachers who are instructing a new generation of students in the science of atmospheric change, to organizers advocating for 100% renewable energy in their communities as part of economic development. Climate change has many intersections, and powerful connections exist between the climate movement and movements for social justice, economic justice, human rights, etc.

In terms of 350.org, we have staff in about 28 countries, based on some of the hotspots in the world where lots of fossil fuel projects are being built but can be stopped, where there is financing for these projects, or where there is a vibrant movement we are tied into. We also work where climate impacts are already directly threatening front line communities. This list includes but is not limited to the United States, Canada, Brasil, Australia (through our partners at 350 Australia), the UK, Germany, South Africa, Japan, India, the Pacific Islands, and in Indonesia. Crucially this list does not include many other places where there are vibrant movements—this is what it means to be part of a larger movement. We work with partners in many other countries where there aren’t 350 staff, like Argentina, China, and Nigeria. There are also hundreds of other 350 affiliates and close partners.

TG: Internationally, there are ongoing campaigns across Europe, growing efforts throughout Africa and much more. What are U.S.-based climate activists unaware of that’s happening globally and how can we get involved?

MB: How much time do you have or pages to print?! There are tens of thousands of important fights taking place to prevent the worst effects of climate change. At times a particular campaign takes on particular prominence in the news and there are calls for global solidarity—like the #StopAdani fight in Australia where activists have effectively convinced numerous banks to refuse to fund the world’s largest proposed mine or the fight to stop the Rampal coal project in Bangladesh, located in a UNESCO world heritage site.

I would highly recommend plugging in on social media to keep track of these fights—you can follow us at @350 and we often post specific ideas about how to get involved. [Editors Note: See the map below for 350.org campaigns near you.]

Another way to think about involvement is that people in the US may be implicated without knowing it. This is a large part of why we are so committed to the fossil fuel divestment movement: because you may have your retirement savings invested in a mutual fund that is invested in, say, the Adani or Rampal projects. “Following the money” is often a very powerful way of being an ally to fights around the world, since so much of the funding comes from financial institutions with ties to the U.S.

All of the work happening globally is aimed at ending the age of fossil fuels as fast as possible ensuring a just and fair transition to 100% renewable energy for all. The Fossil Free campaign outlines the three demands we believe need to happen simultaneously if we are to have a good chance at averting the worst impacts of the unfolding climate crisis. We have campaigns all over the world pushing for the following three demands:

TG: What’s the biggest challenge in front of us? Where is your energy going these days? What are you most excited about in terms of opportunities for the movement?

MB: There are many. It’s the most challenging time I can recall since becoming active in the climate movement as a student. The number of global leaders (the Trumps, Putins and Dutertes of the world) advocating a militaristic, anti-people and pro-fossil fuel agenda is on the rise, and they are regularly sacrificing families, even children, to their agendas. They are restricting who can participate in politics, making more space for corporations and less for communities. Abhorrent and immoral decisions are taken regularly, and all of them take time and considerable courage and conviction to resist and then undo.

The times are indeed dark. Finding and looking for hope and motivation to fight back and pursue a proactive agenda is an increasingly essential practice.

There does seem to be a formula emerging in many corners of the globe. Community members have found ways to put their bodies on the line, to convince their global neighbors to divest, to lobby their governments, and ensure that the path they are on points solidly to 100% renewable energy for all and away from the polluting energies of the past.

Therefore, my energy is going into envisioning what it would look like to expand and inspire the amount of community-based Fossil Free fights around the world. Much of this is about the culture we create as a movement, that helps us work together to solve problems, to build and nourish and sometimes re-build relationships, and to sustain ourselves in these fights that often last years. The pressure of all this takes a personal toll on people, which is where solidarity with others and within our own communities is essential. It is a very natural response to the world we’re living in, but gratefully many people can see and recognize this and can help us stay connected. Connection is an act of resistance when our elected leaders work so hard to divide us. If our connection—particularly across the divisions of race, ethnicity, gender, religion, sexual orientation—weren’t so powerful we’d not be seeing this level of attempted division.

TG: Climate change is such a massive challenge – it’s such a complex issue with so much at stake and we’re arguably nowhere near where we need to be globally in terms of responding to it effectively. Are you hopeful?

MB: Yes. And I have to work at hope, as a practice, every day. I’m deeply distraught and paying close attention to the science and seeing people suffer and learning about ecosystems collapsing.

Our work is about building an increasingly larger movement that can build a Fossil Free world. I am not able to engage in that work without hope; because of what it means to build relationships and win campaigns with the energy hope provides. But I am also hopeful because of who I get to surround myself with: passionate and hard-working and kind people who accomplish things that sometimes feel impossible. Like the people of 350 Colorado who are working to pass a set-back on fracking after suffering a defeat last year; the people of Ireland forcing their entire country to divest; they are not backing down, they are learning and they are moving forward.

I have been very inspired by Rebecca Solnit’s work on hope—it’s an action, it’s a muscle, and it’s very much a choice. Especially for me, born with many privileges: to give up hope and give in to despair, seems an abuse of those privileges, when so many people who are living in targeted communities remain hopeful and vigilant in their own struggles. I recommend reading or re-reading Hope in the Dark every few months. My colleague and 350’s Programme Director, Payal Parekh, recently wrote a piece about “Overcoming Despair,” which I also recommend.

TG: What’s your experience with Bioneers? I think you attended first as a Brower Youth Award winner and have been back since. Has the event and network impacted you personally or professionally?

MB: I first attended a satellite conference in Fairfield, Iowa in 2004, when I was traveling across the country on a veggie oil bus. Twelve Middlebury students and I were part of Project BioBus, speaking to students about climate change and alternative fuels. We were in Iowa for Bioneers and our bus was on display. I felt at home there, and it was part of a discovery at that time about who else was out there. So much of my experience in the climate movement has been like that—the sense of awe and relief to learn just how much is going on out there. It gets to your first question: we are so many.

I also remember being very inspired at Bioneers in San Rafael years later. I learned about Wiser Earth at Bioneers from a talk by Paul Hawken, and the 350 team invited everyone listed in that database to participate in our first global day of action. I first heard Naomi Klein at Bioneers and bought her book Shock Doctrine. Now she’s on the Board of 350, a real dream come true to have your own hero in your midst.

Lastly, I am very inspired by the cross-movement view Bioneers has taken, increasingly bringing a wider equity lens to the work, and expanding the sense of who’s involved. I was glad to see my friend Heather McGhee, President of Demos, speak last year about a new “We The People” for as sustainable future. And perhaps most importantly, Bioneers has been an early champion of the full recognition of the leadership of indigenous peoples in the movement, including my colleague Clayton Thomas-Mueller, long time Board member and Bioneers change agent.

TG: What are you reading at the moment? Do you have 3 books to recommend to our audience?