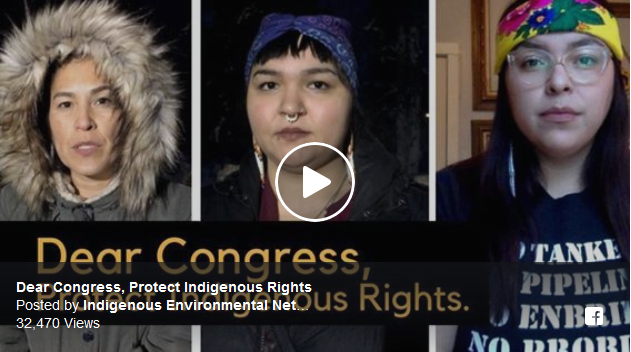 Earlier this week in an unfortunate turn of events, the Republican-led Congress voted to approve a $1.5 trillion tax bill that dramatically increases economic inequality in the U.S will while opening up Alaska’s Arctic National Wildlife Refuge to oil and gas drilling and threatening the future of community health and renewable energy. It can be difficult to remain hopeful in the face of constant and continued violation. It is in times like these that we turn to our powerful Bioneers faculty and community for the inspiration and heart to continue.

“In the strongest terms, we condemn the actions of the United States Congress for this direct assault upon the Gwich’in and Inupiat people of Alaska and Canada. The Indigenous Environmental Network has stood with the Gwich’in Steering Committee for over 25 years in the fight to protect their sacred lands and ways of life from oil development. We denounce this Tax Bill and its ANWR provision for what it is, a pandered legislation to big corporations and fossil fuel interests. We call upon Congress to stop this attack on Indigenous Rights. Stand with the Gwich’in Nation and help us keep fossil fuels in the ground!” Tom Goldtooth, Executive Director

“This is a truly awful piece of legislation, but it can’t stop the work of environmental advocates to protect the air we breathe, the water we drink and the places we play. We will vigorously challenge cuts and rollbacks that threaten American families and indigenous rights, even as we join with the Gwich’in Nation to see the coastal plain of the Arctic Refuge permanently protected.” Michael Brune, Executive Director

“Urgent emergencies that need real legislation– CHIP, DACA, and disaster relief – have been cast aside in this rush to serve the interests of the affluent. This Christmas season, it is critical to remember that Jesus was born to parents who experienced poverty, did not have healthcare, and could not find shelter for the birth of their child. In Bethlehem, Jesus and his parents were turned away by the wealthiest. Later in the Gospels, Jesus reminds us, ‘whatever you did for one of the least of my brothers and sisters of mine, you did for me.’ The House and the Senate Republicans caused great harm to our nation by passing this tax bill.” (Watch her Bioneers Keynote on Healing for the 21st Century)

Amy Goodman spoke to Kali Akuno, co-founder and co-director of Cooperation Jackson (a network of worker cooperatives) in Jackson, Mississippi on the struggle for Economic Democracy:

“This bill is a shameful giveaway to to the donor class and a cold-hearted sellout of the climate, Indigenous people and the public. Generations will look back at this moment with deep remorse. But this dirty deal is not law just yet. We will continue to fight this callous agenda from the grassroots to the beltway.” May Boeve, Executive Director

“The GOP Tax Scam stands as the strongest argument yet for getting big money out of politics, so ‘we the people’ have a chance of making our voices heard above the demands of wealthy donors. In a democracy, the size of your wallet should not determine how much access and influence you have with your elected officials. Yet this shameful tax plan proves that this is exactly how the current Congress operates.

Demos will continue to advocate for a strong democracy in which everyone has an equal say, and a tax code that lowers economic inequality, fully funds our infrastructure, safety net and educational needs, and ensures the richest 1 percent of Americans pay their fair share.” Heather McGhee, President

President of Demos Action, talks about what comes next after the tax bill on WNYC’s Brian Lehrer Show:

No one is talking about this, but this is going to cripple a lot of organizations who would help the most vulnerable survive the impact of the #GOPTaxScam. They are just pushing the limits of cruelty. (Watch her Bioneers Keynote about the Caring Economy)

Dear Congress, the #TaxPlan you just passed is a blatant attack on immigrants, women of color, and low-wage workers. But understand this: we are organized. We are powerful. And we are not going away until we build a caring democracy for us all.

227 members of Congress just showed us who they really are by voting on a #TaxBill that will hurt all of our families. Now it’s our turn to show them what democracy looks like.

“This is a shameful betrayal and a fraud on the American people. The purpose of setting a sanctuary aside is to keep it safe from exactly this kind of industrial—and permanent—ruin. The last thing the country needs is more fossil fuel development in a pristine and ecologically vital area.” Rhea Suh, President of the Natural Resources Defense Council dives deeper into the bill here »