A Prisoner of Hope 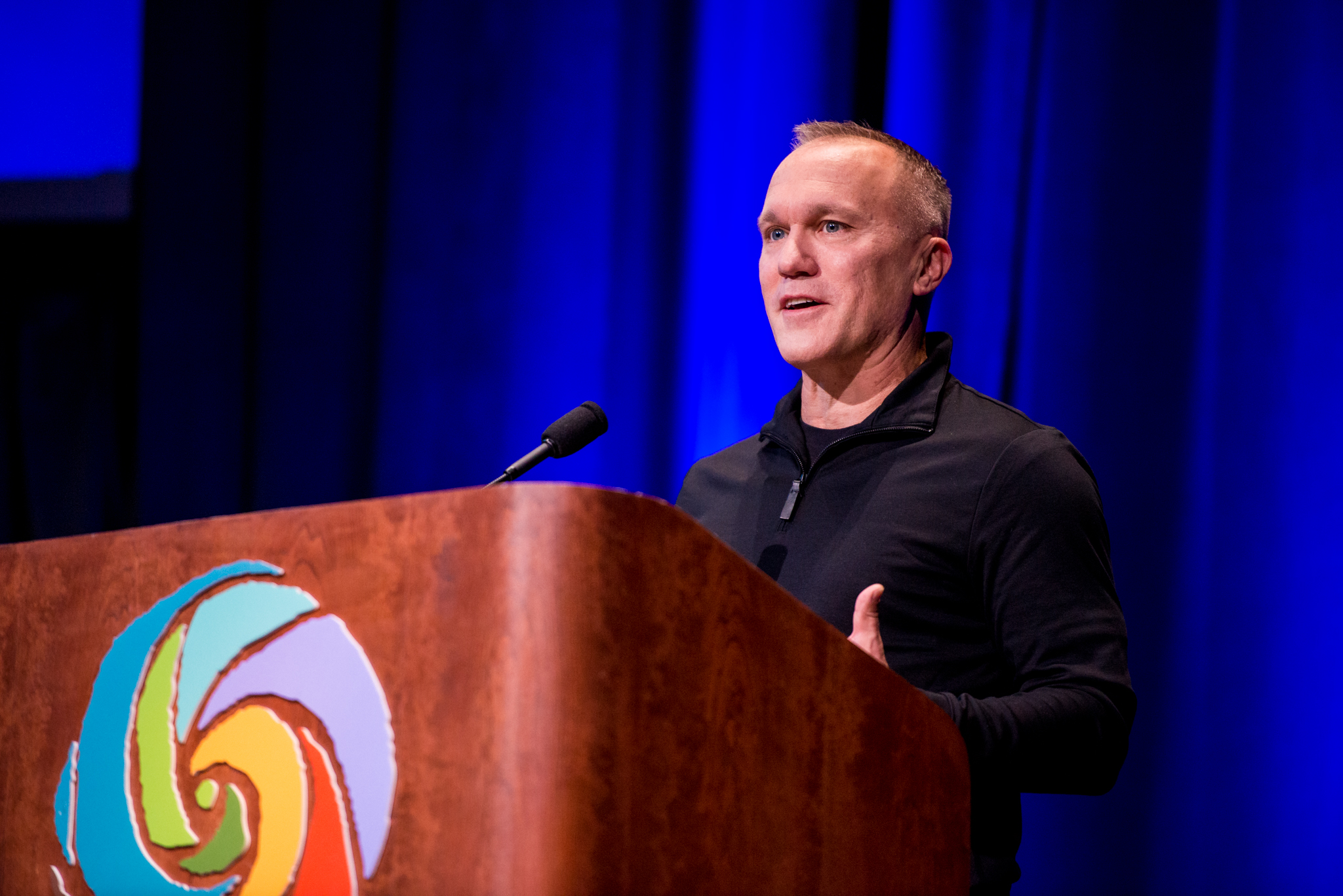 The following is a speech written and delivered by Bioneers Executive Director Joshua Fouts at the 2018 Bioneers Conference. View the full keynote video here.

I have to admit I had to trash many versions of this talk. Every time I thought I had formulated a coherent presentation, another dramatic shift, another revelation in one the countless mind-boggling scandals we are currently enduring, another assault on decency somewhere in the world, another challenge to my previous notions of reality, would force me to reevaluate what I thought and what I should say.

I know I am not the only one during this very dark time in U.S. and global politics to experience disorientation and to start to question so much of what I had taken for granted and thought I understood. I have to admit I have been experiencing many moments of gloom and despair.

But as I was getting ready to come to Bioneers — an experience I always find rejuvenating — I began to look around for guidance to help me build up my resilience, find a bit more clarity, and reconnect with a sense of purpose. I looked in both predictable and unexpected places: Conversations with family members, my own experiences and memories, in my observations of the natural world, in the words of leaders and thinkers I respect, both contemporary and from generations past, quite a few of whom have been here at Bioneers over the decades.

I can’t say I found any simple answers, but the exposure to all that wisdom helped. Then I read something that once again blew my mind and sent me into another tailspin. An investigative piece in WIRED magazine revealed that Russian trolls had been behind efforts to create dissent among Star Wars fans, folks for whom those films serve as empowering metaphors for their own heroic journeys through life. How amazingly clever and how diabolical! This was an attempt to penetrate people’s myths and divide and demoralize them in their psychic core. This is akin to an enemy attacking not your land or infrastructure, or even just your elections, but your very dreams. (Cue Leonardo DiCaprio, Ellen Page and the cast of Inception to get to the bottom of this.)

It reminded me of a speech George Lucas (the creator of Star Wars of course) gave in which he outlined Star Wars’ key moral theme: the contrast between light and dark. “There are two kinds of people in the world,” he said, “compassionate people and selfish people…If you go to the side of the light, you will be happy because compassion, helping other people, not thinking about yourself, thinking about others, that gives you a joy that you can’t get any other way.” While “Being selfish, just following your pleasures…you’re always going to be unhappy. You’ll never get to the point … You’ll get this little instant shot of pleasure, but it goes away and then you’re stuck where you were before. The more you do it, the worse it gets. You finally get everything you want and you’re miserable because there’s nothing at the end of that road, whereas if you are compassionate and you get to the end of the road, you’ve helped so many people.”

Now, granted, this is an over-simplified teaching geared to big budget movie morality tales, and all of us contain light and dark potential, but it still contains some core truths. And thinking about Lucas’s words, the sheer amount of darkness we’re currently seeing in the world made me begin to wonder if the dark side just has too many advantages, whether The Force really isn’t with us. I began to doubt the words of Martin Luther King which I had long wholeheartedly subscribed to: “The arc of the moral universe is long, but it bends toward justice.” I had just been seeing so much more injustice than justice lately, and in so many parts of the world at once.

But ultimately two wise voices got me back on track. The first was, ironically, the late Joseph Campbell — who advised Lucas on Star Wars’ mythology. I came across a quote of his: “As you proceed through life, following your own path, birds will shit on you. Don’t bother to brush it off. Getting a comedic view of your situation gives you spiritual distance. Having a sense of humor saves you.” And that hit me like a ton of bricks. Yes, the Age of Trump had been making me lose my sense of humor. If I can’t laugh, above all at myself, the bastards will really have won, so thanks, Joseph. Step number one, accomplished: I turned the laugh track back on.

And that reawakened humor triggered a familial memory, an anecdote about my father, a world-renowned researcher on primates. When he was a young professor he had been working with a group of chimps to whom he was teaching sign language. He was out with a young male chimpanzee named Booee and a group of human graduate students. In those days, the chimps were unfortunately required to wear a sort of leash around their necks, called a “lead” as they are much stronger than humans — eight times stronger, pound for pound, in fact and therefore perceived as being quite dangerous.

At the end of the lesson my dad told Booee that it was time to go back into the chimp compound, an unpleasant collection of rusty cages that no human would want to live in, so why would a chimp? Booee protested by promptly climbing up a tree, but my dad, the young alpha male professor, was not about to be humiliated in front of his students by a chimp, so he thought he’d show Booee who was boss by wrapping the lead around his wrist so that Booee had no room for movement, getting very close to the tree and angrily demanding that Booee come down. In response, Booee, calmly, with one arm, reached down, grabbed the lead and lifted my 200-pound father off the ground swinging from the lead.

My dad, in what I can only infer was a moment of ego free clarity, quickly changed the subject: He looked up at Booee and signed, “I forgive you.” Delighted, Booee leapt out of the tree into his arms and off they went. So not only might birds shit on us, but non-human animals and the rest of nature will surely show us who is really in control, bringing us back into line if we don’t learn respect, compassion, forgiveness and empathy — for all beings, not just humans.

The second voice that helped me regain my bearings was an essay from Rebecca Solnit that really gave me a much-needed historical perspective. It drove home how many things really have dramatically changed for the better. She wrote: “Thirty years ago Ronald Reagan was president, the threat of an apocalyptic nuclear war seemed very real, a large swathe of the earth lived under the totalitarianism that got called Communism, which seemed like it might last centuries rather than another year…Anita Hill had yet to speak up and almost no one addressed sexual harassment…Same-sex marriage was virtually inconceivable to most people; the Lawrence vs. Texas ruling decriminalizing gay sex nationwide was fifteen years away; First peoples had been almost entirely erased in public discourse … and we got most of our energy from coal.” Aha, thanks Rebecca. Step 2, check: Don’t lose sight of the long game because of all the distractions of this current surrealistic nightmare.

I remembered that Archbishop Desmond Tutu had once said, “I am not an optimist. I am a prisoner of hope.” I think hope is what brings so many of us back here to Bioneers each year. And this weekend has really helped reboot my hope. Hearing about all the inspired, courageous work and all the innovative projects so many of you are involved in has dispelled much of the darkness I was wallowing in. Hearing from so many youth from such diverse backgrounds, identities and ethnicities who are here participating in our Youth Leadership Program on scholarships, which all of you make possible — thank you! — has given me enormous faith in the future. Theirs is a generation so far ahead of us from the get-go: allergic to racism and injustice in their very core, totally comfortable with the authentic expression of gender identity, unwilling to tolerate continued gun violence.

My son, August, who is 17, is here today. He has grown up as part of this more expansive generation. His acceptance and openness to people from all walks of life inspires me. It is what he knows is right in his bones. In many ways he has become a teacher to me. And you heard yesterday from the extraordinary Edna Chavez whose strength and resiliency exemplify the unstoppable momentum of these young leaders. This generation will not go back in time. I now see I was wrong to doubt MLK’s wisdom. I am convinced that today’s emerging leaders will ultimately succeed in ushering in far more enlightened times. And it’s important to note that much of the progress we have made in the past few decades is still in place — even though we still face many challenges.

So, that has been some of my inner journey this past year. I can’t promise I won’t have moments of doubt and fear, but one thing my quest for guidance and this incredibly uplifting weekend have reinforced for me is that no matter how infuriating the daily headlines might be, I will do my utmost to keep at it, to work for the world we want to see, and to choose hope, empathy, and compassion. But I will also do my best to remember not to take myself too seriously, lest the birds and chimps and the entire natural world decide to set me straight.