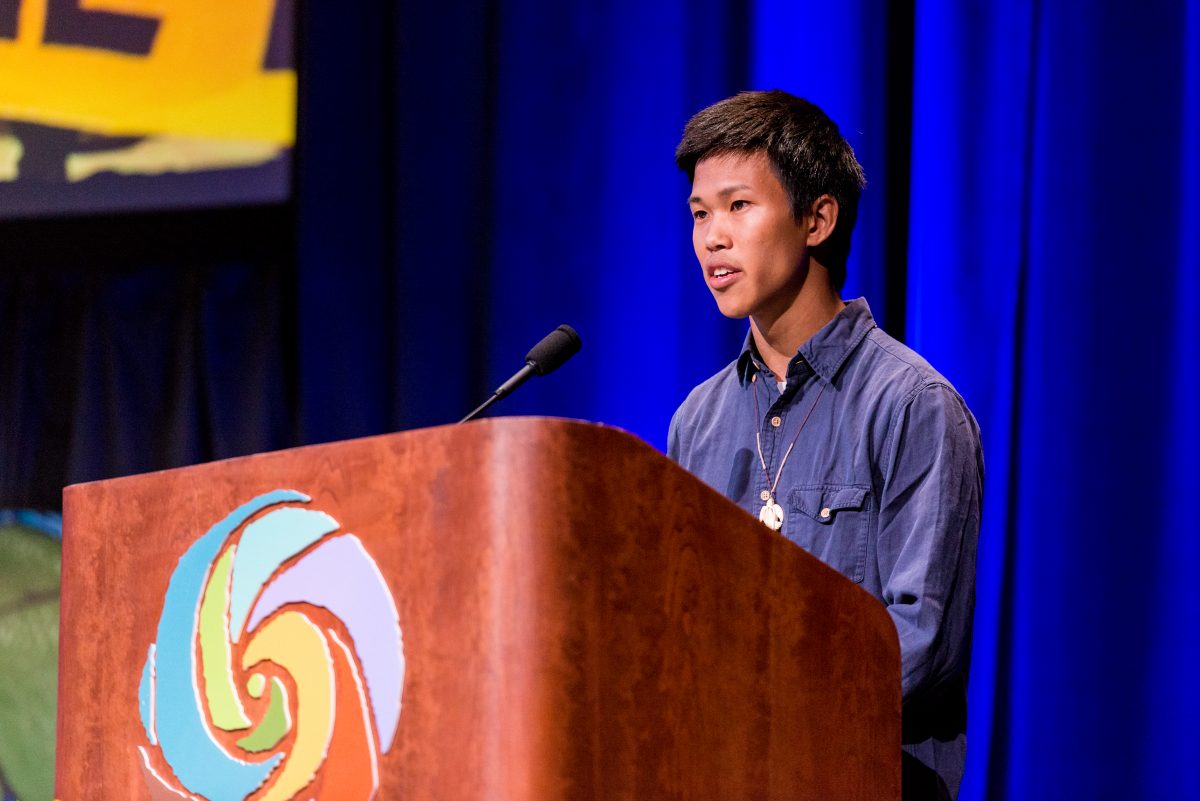 A U.S. policy analyst at the Environmental Defense Fund, Charlie Jiang advocates for just climate solutions at the state and federal level. He was a key SustainUS youth delegate to the 2017 U.N. climate negotiations, organizes for climate justice in Washington, DC with 350 DC, and received a 2017 Brower Youth Award for co-leading a #NoDAPL divestment campaign in DC.

Jiang’s own history has been a massive influence on his life thus far. The son of Chinese immigrants, Jiang is familiar with the struggles involved with attaining the American Dream, and through his work he’s realized that our country’s promise falls short for too many—or is simply impossible. He wants to change that.

In his Bioneers 2018 keynote address, Jiang talks about his own experiences growing up in the US, the environmental and humanitarian crises we are currently facing, and what needs to be done to make the American Dream attainable for all.

My mom carried $300 in her pocket, and barely spoke a word of English when she immigrated to the US from China in search of the American Dream. She and my father believed that if they worked hard enough they could create a better life in America for themselves and for their kids.

But today that dream seems unattainable for too many, and as I have learned and witnessed, it always has been in a country founded on the injustices of slavery, genocide, patriarchy, and white supremacy. I’ve seen that for people in my generation the promise of the American Dream seems laughable in the face of police brutality, gun violence, deportations, unlivable wages, threats to water and Indigenous sovereignty, and climate change.

When I was little it seemed like we had all the time in the world, but in this era, time is running out. Today we face a choice. We can go down a path of denial rooted in a politics of fear, or we can choose to confront our legacy of racism and injustice, and forge a new vision for our nation, a new kind of dream in which everyone can lead their lives with dignity and grace, where all of us—whether a queer black woman from Baltimore or a working class family from the California’s Central Valley or a Chinese American kid from the South Side of Chicago—has a chance to thrive in communities that are healthy, safe, and just, with access to good healthcare, education, housing, and jobs, where the air is clean and the water is safe to drink, where women are believed and respected, and privileged men are held accountable, where communities can self-determine their own futures, and where pipelines and pollution are a thing of the past. This is the future we are called to create.

It’s not an easy path, not when our political system is held captive by billionaires and corporations who profit off of violence to workers and communities of color, not when there are still resource inequities in our own movements. But I believe we must try.

We face a crisis on a global scale. We need action for global climate justice, and we need concerted federal efforts to mobilize trillions, for a Green New Deal to stop climate change and create opportunities for millions of Americans in a new economy.

But it starts with our communities. It starts with you. And it starts with me, a son of Chinese immigrants, who grew up wanting to be a scientist, who became an organizer because I saw that I have a voice to give to a struggle for a new ideal for this nation.

So what can we do? First we must do what we need to do to process the trauma and grief in ourselves and our communities from the pain and damage that has already been inflicted. We are called in this time to be vulnerable and strong so we can hold space for the deep relationships, trust, and love that we need in ourselves and each other.

Second we have to vote. If our elected officials won’t prioritize the needs of millions of people over those of the wealthy few, then we must replace them with leaders who will. Knock on doors, make phone calls, help your neighbors get to the polls, and go vote.

Third, we have to organize to build solutions in our own communities, and in doing so ensure that communities of color, Indigenous People, young people, leaders on the frontlines of the crises we face, who know what need to be done, have the resources, access, and power to lead the way. It’s already happening.

In Washington, DC, we’re building a diverse movement to divest from Wells Fargo and create a public bank that will promote a just economy for the district, not pipelines and private prisons. In Chicago, a statewide coalition secured funding for a solar job training program for formerly incarcerated individuals and youth in the foster system. In California, youth and frontline communities are demanding the governor phase out fossil fuels for good, a movement led in part by dear friends of mine from the organization SustainUS.

My parents came to this country and dreamed they could build a better life. It’s a dream I grew up believing in, and it’s up to us, to all of you and to me, to get to work to make that dream fully possible.