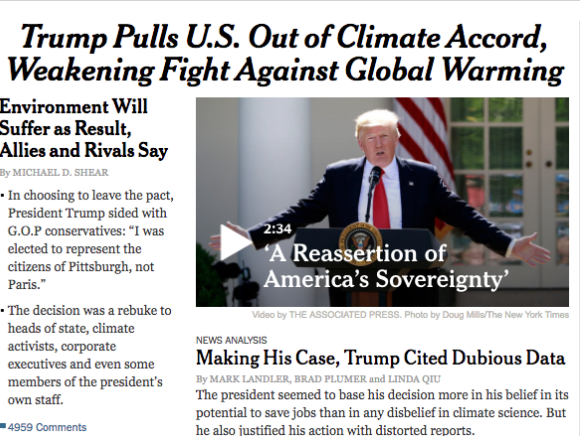 The disgraceful, shortsighted and embarrassing decision by the Trump Administration to pull out of the Paris Climate Treaty has since fallen by the media wayside, given the Comey testimony and the absurd reality show accompanying it. During the week when the Paris agreement was front page news, much ink was spilled on the topic and several of the most salient perspectives worth spending some time on include Elizabeth Kolbert, Naomi Klein, Vien Truong & Bill McKibben, among others.

I was drawn to another piece of media coverage of the Paris withdrawal, although not so much for the content as for the headline. The June 2 issue of the New York Times Online points towards the continuing challenge of media coverage of climate change issues. This headline, and others like it, represent a fundamental problem with the way that climate change is still being discussed and covered. The headline for the article, bylined by Michael Shear, read: “Trump Pulls U.S. Out of Climate Accord, Weakening Fight Against Global Warming: Environment Will Suffer as Result, Allies and Rivals Say,” (emphasis added).

If it isn’t abundantly clear by now that climate change is not just an “environmental issue”, I don’t know when it will be. Certainly there will be calamitous impacts on the non-human biosphere as a result of unchecked climate change. Miles of bleached coral reefs, ice-free arctic summers and the potential impact of rapid climatic shifts on intricate interspecies relationships established over millennia are just a few of the risks. However, continuing to cast climate change a strictly environmental issue is as much of a failure as a lack of climate action. For a quick hit litany of what we’re facing as a society, just read the opening section of Bill McKibben’s landmark 2016 New Republic article. It almost feels absurd to lay out, again, the potential fundamental threats to various components of human society posed by a global climate system gone into overdrive: inundated coastal cities, massive droughts, urban heat waves, supercharged storm systems, acidic oceans, global pandemics, climate refugee crises, etc. It’s entirely likely, for instance, that Miami will become the next Atlantis. I haven’t read any analysis regarding the environmental impact of a major metropolitan city going underwater, but it seems patently obvious that the real losers would be human health, economies and societies.

Whether or not the Trump Administration’s decision will have an overwhelming impact on the future temperature of the earth remains to be seen. In many ways, he has been the greatest organizer for civil society that we’ve seen in recent times. The overwhelming response by American businesses, states, cities and regions (collectively referred to as ‘sub-national actors’) has been inspired and heartening. The question really is related to whether we’ll take aggressive enough action in time to avoid the most deleterious impacts that could arise down the road, as the ship has already left the harbor. In the end, climate change, like most other ‘environmental’ issues, is in fact neither a strictly human nor environmental problem. As David Suzuki famously said on the Bioneers stage, “We are the environment; there is no distinction.” We’re all in the same boat– and we need to start acting like it.